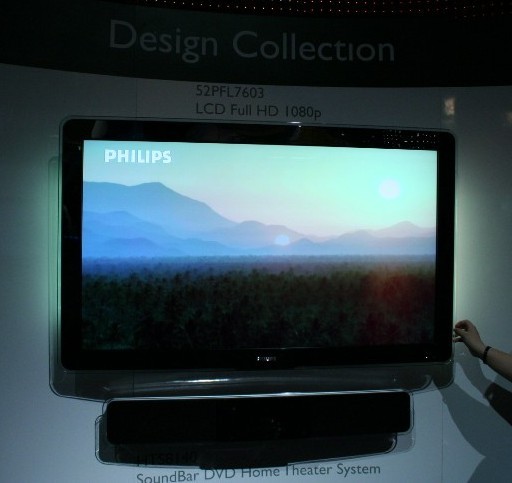 Philips debuted its 7000 FlatTV series at CES. This new line ranges from 19 to 52 inches (diagonal), and features a rounded edge surrounded by an acrylic edge, which not only gives the set a less rigid look but also enhances the sets technology.  Philips reportedly conducted extensive research with consumers to find out what they really wanted.  The response was that consumers feel that most televisions look the same and they miss products that are “outstanding”.  Consumers share a desire for products with a simpler and more approachable, softer and more sophisticated design.

The new design collection delivers on that need with a design that is minimalist, emotional, and recognizable and led by the 7000 series.  Consumers will also notice the absence of a speaker grill, which makes the sleek, black bezel continuous around the set for a more minimalist look.  The sound is actually powered from the back and carried out throughout the acrylic flare around the set.  The end result is a TV that actually is part of your environment –superior performance packed in a design that is truly like no other.

Combined with amazing picture performance, Philips’ latest generation of LED Ambilight technology immerses and engages viewers like no other display. The advanced lighting feature – available on the 7603 series - captures the colors and action on the screen and provides well-balanced light behind the TV set. This leads to more relaxed viewing and eliminates the need for additional ambient lighting while watching television.

Calibrating picture settings is a breeze with Philips’ simple, unique settings assistant feature. In a few easy steps, users can select their on-screen preferences with the left and right cursor buttons. By using a program similar to an eye test, viewers can select what they perceive as the best picture and sound. Choose initial preferences from the five split-screen samples and the television will make the changes and store them for future use. The 7000 series offers four HDMI 1.3a inputs with built-in consumer electronics control (CEC) for the cleanest, clearest digital signal. Now users can hook-up as many as four HDMI devices while assured their sets are future-proof for further connectivity. For more information, please visit www.philips.com.