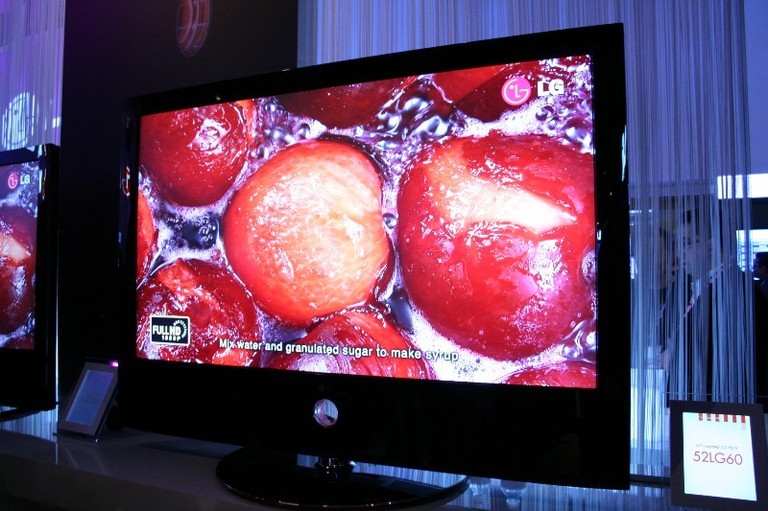 LG presented its next-generation LCD and plasma product lineup at CES this year. LG’s striking new LCD TV, the LG60 is, at just 45 mm, is one of the slimmest TV available. Featuring a Full HD 120Hz panel, it provides exceptional picture quality, which can be optimized for fast-moving images including movies, sports and games. Meanwhile, the LG60’s Intelligent Sensor automatically adjusts brightness according to the ambient environment, offering both optimized picture quality as well as a 50 percent reduction in power consumption. Incorporating LG’s Invisible Speakers, the LG60 delivers clear sound with a wide sweet spot while maintaining a seamless look.

The PG60, LG’s new plasma TV, has a clean, frameless design made possible through LG’s advanced technology. This also reflects consumer demands toward minimalism design. Incorporating Single Layer technology, LG was able to completely eliminate the usual screen border, making the set appear to be an elegant, seamless sheet of glass. This window-like, screen-only TV is more than just looks, however. The PG60 boasts a contrast ratio of 30,000:1 – the industry’s highest – which enables better black levels than ever before, and which are further enhanced by its Dual XD engine. The TV also has Full HD capabilities and Fluid Motion technology that displays images much faster than 180Hz. The PG60 similarly includes LG’s Invisible Speaker with upgraded sound quality and wider sweet spot.

LG Electronics is among the first mainstream consumer electronics companies to achieve THX Display Certification for plasma HDTVs (models 60PG60 and 50PG60). As the industry benchmark in video image quality, THX Display Certification promotes anHDTV that can present HD and standard- definition video content at maximum resolution with the correct color and light levels. THX Movie Mode will be offered as the “Cinema” mode on the PG60 models.

Both the LG60 and PG60 have been developed to allow Full HD wireless data streaming. For more information, please visit www.lge.com.