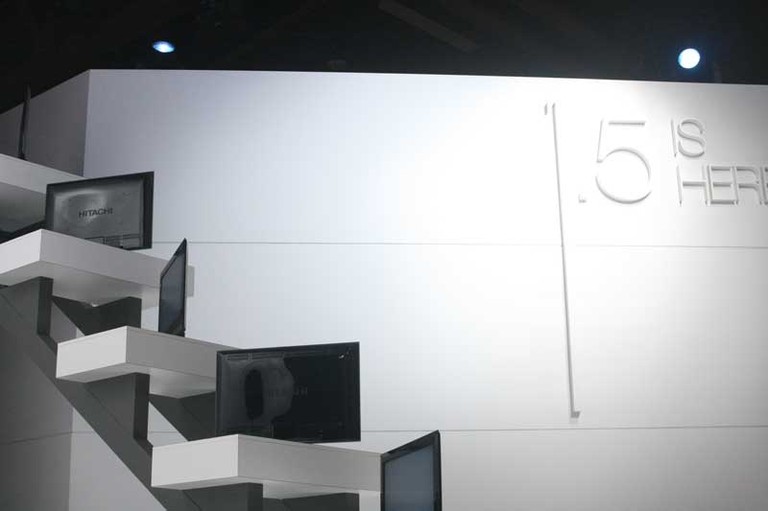 Hitachi has released an Ultra Thin 'Director Series' LCD display panels that are merely 1.5-inches in depth. Having shaved more than one third of the thickness off of today's comparable plasma displays, this new product represents an engineering achievement of significant importance from Hitachi. What's so impressive about this? It's shipping this year. That's right, while other manufacturers were showing off prototypes (and Hitachi is no exception to that) Hitachi is readying it's new 1.5-inch thin plasmas for retail sale this year. If you don't understand the significance, take a look at your own LCD panel, or visit a big box store to compare. 42-inch and larger LCD panels are typically around 5- to 6-inches thick. Hitachi's new line goes from 32-42 inches and all are only 1.5-inches in depth.

The thinness of the displays was achieved through Hitachi’s proprietary implementation of a technology called External Electrode Fluorescent Lamp (EEFL), which affords greater power efficiency, delivers better and more flexible color accuracy and delivers a longer overall life span for the display.

A glossy and high precision frame surrounds the picture area of each of the displays. The frame is beveled to present the viewing picture as if it were a work of art. The combination of a bevel on the outer frame combined with a radius on the inner frame presents a nice touch that we found rather artistic. Yet another company going 'green', Hitachi’s energy-efficient features such as “auto power off,” to prevent consumers from forgetting to turn off the TV and the UT series also feature a “video power save” which allows consumers to switch to stand-by mode when there is no signal coming into the TV.

To say these LCD panels are sleek is a bit of an understatement.

What About Thin Plasmas?

While a handful of companies, including Hitachi, have already developed and demonstrated Ultra Thin LCD models, Hitachi is among the first vendors to demonstrate an Ultra Thin plasma display. For various technical reasons, the challenges in producing a thin plasma display greatly exceed those associated with developing a thin LCD, making Hitachi's achievements - 1.5-inch Ultra Thin models in both LCD and PDP - even more impressive. As a result, Hitachi expects to seize an early lead in the rapidly emerging and commercially attractive new category of Ultra Thin Displays.

What would be even more important than being first with a prototype or concept is being first to deliver the end product to consumers. For their complete new line of Ultra Thin displays, Hitachi claims to already have the manufacturing processes, sales and marketing investment and overall corporate commitment in place to put these products into consumers' hands months, if not years, ahead of other suppliers.

Developed using highly proprietary and innovative technology from Hitachi, which is apparently so secretive and highly competitive it cannot be revealed, we also saw their new 50-inch plasma display panel prototype. Hitachi expects to commercialize the product by late 2009 and other sizes would conceivably be available at that time.

Who knows, perhaps when combined with their new brain scan system, Hitachi will even eliminate the need for remote controls!