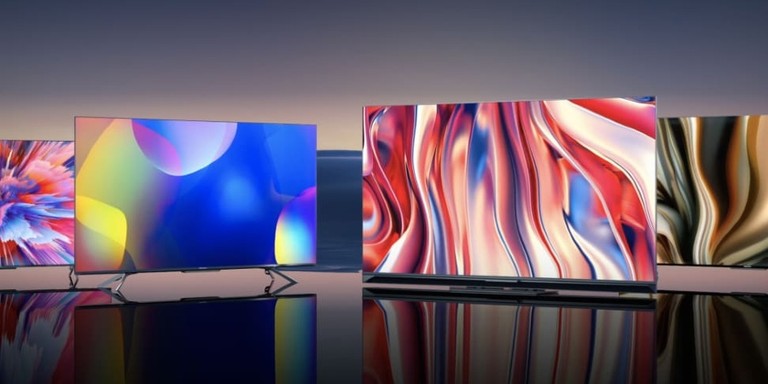 Hisense was already the number-one TV maker in China when the brand first launched in the USA back in 2009. The company had actually set up an American operation eight years prior, working as an OEM (Original Equipment Manufacturer) for other brands while studying the US market and learning valuable information about the habits and priorities of the American consumer. The brand’s initial TV offerings were all about high value, and the company had great success moving large volumes of product through stores like Walmart, Costco, and Sam’s Club. As Hisense gained more brand recognition and earned the respect of American consumers (and tech reviewers), the company was able to move more upmarket, building more advanced TVs with higher performance and commensurately higher prices. This is the same trajectory that we’ve seen from brands like Vizio and TCL — also relative newcomers when compared to the TV industry’s old guard. Now, all three of these brands make high-end TVs along with more affordable budget models, making them a serious thorn in the side of prestige brands such as Sony, Samsung, and LG. (In Europe, you can add Philips and Panasonic to that list.) Hisense recently unveiled its 2022 TV lineup, and it covers the gamut from an entry-level 32-inch TV selling for $200, all the way up to advanced ULED TVs and Laser projectors costing several thousands. Notably, the brand’s top ULED TVs now use Mini LED backlighting — a first for Hisense. Read on for a brief overview of the 2022 Hisense TV lineup.

Year after year Hisense continues to grow. Our success stems from an acute focus on one thing: making great products. By prioritizing our products above all else — ensuring we’re delivering the best performance to consumers — and putting premium options within people’s reach, we have become a major force within the consumer electronics industry. In 2021 Hisense was the fastest growing among the top five TV brands in North America — specifically with screens in the 50-inches and above category — and celebrated our most award-winning year to date. We are proud to see consumers and experts take notice and look forward to building on the success, bringing consumers even better products in 2022.

If you aren’t familiar with Hisense, you might be asking what a ULED TV actually is. Since 2015, Hisense has used the name ULED to describe its top LED-backlit LCD TVs, which use software to optimize brightness, color, motion, and various other factors that affect picture quality. The name ULED doesn’t represent a specific display technology, the way OLED does, for example. Instead, it’s a marketing term — similar to Samsung’s QLED, which denotes a Samsung LCD TV that uses quantum dots. And as it happens, all 2022 ULED TVs feature a quantum dot layer, affording them the vibrant color performance associated with that technology. All 2022 ULED TVs also use the Google TV operating system, which is reportedly more advanced and more user-friendly than the older Android TV user interface. Hisense’s flagship TV for 2022 is the 75-inch U9H, which features Mini LED backlighting, an upgraded processor, a 120Hz native refresh rate, and 2,000 nits of peak brightness. Thanks to its Mini LED backlighting and advanced software, the U9H features more than 1,280 local dimming zones. Dolby Vision and Dolby Vision IQ are onboard, along with a host of gaming features, including auto low latency mode, variable refresh rate (VRR), FreeSync, and Game Mode Pro. FreeSync is an adaptive synchronization technology for displays that support VRR, designed to prevent tearing and reduce stuttering caused by misalignment between the screen’s refresh rate and the content’s frame rate. According to Hisense, Game Mode Pro makes commands from the controller “almost instantaneous on the screen,” and automatically optimizes display settings for a superior gaming experience. The U9H also offers the newly-integrated NextGen TV ATSC 3.0 tuner. NextGen TV ATSC 3.0 is a new over-the-air broadcasting standard designed to deliver 4K HDR video, on-demand viewing options, and potentially better reception, all for free with an antenna. On the audio side of things, the U9H has a unique speaker layout featuring speakers in both the top and bottom of the TV. It also supports Dolby Atmos via eARC, and the wireless audio standard from WiSA (the Wireless Speaker and Audio Association), meaning it has the required software to control WiSA-certified wireless speakers, for true surround sound performance without speaker wires. The U9H is scheduled to become available in late summer 2022, for $3,200.

Available in 55-inch, 65-inch, and 75-inch screen sizes, the U8H is only a small step down from the U9H. Like its flagship sibling, the U8H features Mini LED backlighting, just with a lower peak brightness (1,500 nits instead of 2,000), and a smaller number of local dimming zones (exact numbers TBA). It retains the 120Hz panel, the NextGen TV tuner, and all of the HDMI 2.1 gaming features of the flagship. It also features Filmmaker Mode, Dolby Vision IQ, HDR10+, and IMAX enhanced bona fides. While it lacks the U9H’s top-and-bottom speakers, it does support Dolby Atmos w/ eARC, and WiSA. Last year’s U8 Series was Hisense’s most award-winning and best-selling high-performance TV, and this year’s U8H is poised to repeat that success. The U8H will be available from mid-summer 2022, starting at $1,099. The more affordable U7H and U6H TVs feature standard LED backlighting rather than Mini LED, but they still offer many of the same features found higher up in the Hisense ULED lineup, including quantum dots, Dolby Vision/IQ, HDR10+, and Filmmaker Mode. The U7H will be popular with gamers, thanks to a 120Hz panel with VRR, auto low-latency mode, Game Mode Pro, and FreeSync. It also features the NextGen TV ATSC 3.0 tuner. The U7H will also satisfy big-screen lovers with its 85-inch option, in addition to the 55-inch, 65-inch, and 75-inch sizes. The U7H will be available in mid-summer 2022, starting at $800. The cheaper U6H Series is Hisense’s most affordable ULED offering. It has a 60Hz native refresh rate and fewer advanced features, but still boasts quantum dots, Dolby Vision IQ, HDR 10+, and FiImMaker Mode. The U6H will be available in summer 2022, in 55-inch, 65-inch, and 75-inch screen sizes, starting at $580.

Situated beneath the company’s ULED TVs are the budget-oriented A7H, A6H, and A4H Series. These TVs will satisfy those who need smaller screen sizes, or who want the biggest possible screen for the lowest possible price. The 85-inch A7H, for example, will sell for a very reasonable $1,700 when it hits stores in spring 2022. Both the A7H and the smaller A6H (available in 43-inch, 50-inch, 55-inch, 65-inch, and 70-inch screen sizes) deliver 4K resolution and are equipped with features only found on high-end TVs just a couple of years ago, such as Dolby Atmos, Dolby Vision, and ultra high-speed HDMI ports supporting eARC and auto low-latency mode. The A6H will be available in spring 2022 starting at $300. Finally, the A4H is a 2K TV featuring a new bezel-less design and the Android TV operating system. Available in 32-inch, 40-inch, and 43-inch screen sizes, the A4H will start at just $200 when it goes on sale in spring 2022.

If 85 inches just won’t cut it, Hisense offers a variety of ultra short throw projectors that combine the easy installation of a TV with the grand scale of a projector setup. The L9G and L5G 4K Laser TVs bundle a projector with a 100-inch or 120-inch screen for an all-in-one package that gets you up and running as quickly as possible. The projector can be placed just inches from the screen. Both the L9G and L5G are carried over from last year’s offerings, but with new features and improvements that make them even more competitive at their respective price-points. Last year, the L9G won several awards and commendations, including the prestigious “Best in Class” designation from ProjectorReviews.com. The secret to its success is a triple laser light engine (which Hisense calls TriChroma) rated to 3,000 lumens for over 25,000 hours. Now, the 2022 L9G adds Dolby Vision support to an already-winning design. The L9G is available with a 100-inch ($5,500) or 120-inch ($6,000) screen. At CES 2022, Hisense dropped hints that a 90-inch version would be coming later this year, and that 80-inch and 75-inch versions would follow in 2023. The slightly more affordable L5G uses a blue laser light source (which Hisense calls X-FUSION) to produce an image that exceeds the standard 4K color range and offers “razor-sharp, precise images (and) detail,” according to Hisense. With up to 2,700 lumens of brightness on tap, the 2022 version now supports Dolby Vision in addition to Dolby Atmos, along with Filmmaker Mode. Like the L9G, the L5G features the Android TV user interface. The L5G Laser TV is available now for $4,499 (100-inch) and $4,999 (120-inch) MSRP.

If you want to put a very large TV in your living or theater room, this Hisense would be an excellent choice. The Hisense L9G offers a great picture, smart features, and low maintenance, making it a compelling alternative to a large flat-panel TV. All new for 2022 is the PX1-PRO TriChroma Laser Cinema, a standalone ultra short throw projector that allows users to choose their own screen, allowing for more flexibility when putting together a home theater. Need an acoustically transparent screen that hides the front-stage speakers in your dedicated home theater? Or one that rejects ambient light for use in a brightly-lit multi-use space? It’s BYOS with the PX1-PRO, which features a newly-developed digital lens focus system that allows it to produce a “razor-sharp picture” that is adjustable from 90 to 130 inches in size. Like the L9G Laser TV, the PX1-PRO uses Hisense’s TriChroma laser engine with pure red, green, and blue lasers, allowing it to reproduce more than a billion colors, according to the company. The PX1-PRO TriChroma Laser Cinema is available now for $3999.

For a more in-depth look at these products and more, check out Hisense’s keynote presentation from CES 2022.