The Truth Behind HDMI 1.4a 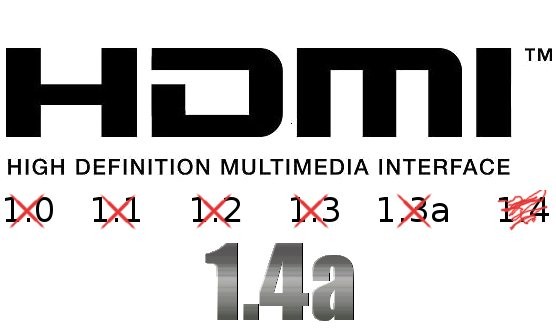 Wait, what version are we on now?

Way back on May 28, 2009, HDMI Licensing released the HDMI 1.4 spec. There were a few things that were exciting about HDMI 1.4. For home theater there was an increase in the maximum resolution to 4K × 2K (3840×2160p at 24Hz/25Hz/30Hz and 4096×2160p at 24Hz), an HDMI Ethernet Channel which allows for a 100 Mb/s Ethernet connection between two HDMI connected devices, and an Audio Return Channel. Most importantly, we were led to believe, was the inclusion of support for 3D. In those pre-Avatar times, this was perceived as a bit premature. Of course, we now know that it wasn't, as only recently HDMI 1.4 receivers are hitting the market.

Twice reported that HDMI stated that manufactures have to confirm for themselves that their devices will support the new mandated formats. This means that they'll have to test their recently released devices with content that hasn't been created yet. It's either that or upgrade to HDMI 1.4a. This is harder for some than others.

For sources, they only need to support one of the mandated 3D formats (which makes sense). Receivers need to be able to pass all four and displays need to be able to accept and display all four. According to Steve Venuti, President of HDMI Licensing, HDMI 1.4 equipped AVRs (receivers) should be able to pass all four formats as the new broadcast formats are essentially the same as 2D video. Of course, he put the onus on the manufacturers to make sure that his statement was true for their specific devices.

The question in many consumer's minds is whether or not their receiver can pass the new formats or be upgraded via firmware to be HDMI 1.4a compatible. The answer is - yes. Depending on the initial implementation of the HDMI 1.4 spec, it may be out of the box ready or require a firmware update. In fact, Harman Kardon is already planning to upgrade three of their 1.3a receiver to 1.4a. Since they are saying that their receivers will be upgraded to "HDMI v.1.4a with 3D," we assume that means you'll get all the additional features as well (not just 3D). We're not sure how this is possible since HDMI initially claimed that you needed a different chipset for 1.4. If so, however, you'll need HDMI 1.4 cables to take advantage of the Ethernet Channel feature (the Audio Return Channel is more or less supported with current generation cables). Other HDMI 1.3a receiver owners shouldn't hold their breath for upgrades, however, as no other manufacturer has announced any similar plans.

While you're going to see more and more HDMI 1.4a devices released in coming months, those with HDMI 1.4 receivers shouldn't be too concerned. Chances are, your 1.4 receiver will either work with the new HDMI 1.4a 3D formats out of the box or can, in theory, receive some sort of firmware upgrade. Whether it will or not remains up to the manufacturer. The real concern should be for people with new 3D displays. They are going to want to make sure that their display will support all four of the 3D formats in order to take advantage of, in particular, any broadcast 3D possibilities that may come up in the near future.

Improper network implementations on the other hand can potentially expose private data, create more Internet worm sources as firmwares get hacked, or open up the home to use as part of a botnet. Proper networking is complex, and the decisions made have major consequences.

If you believe that networking involves just dropping an Ethernet PHY into a device, you're misinformed and should have a professional check your home network settings soon.

Before the rebuttals, even major vendors' Internet routers have been hacked and/or have firmware bugs that cause security or other compatibility problems. As an example, if my Yamaha receiver acted as a router for my television's hypothetical video on demand service, but didn't understand P-MTU, it might not be possible to download some content from some providers. This happens to be a fairly common issue with improperly configured routers already. How about firewalls? Security settings?

I'll stick to proper network connections for my networked devices, thank-you.
MidnightSensi posts on May 11, 2010 09:36
I think Ethernet would be cool to have in HDMI. Basically everything is networked now, I had to put a switch in my rack. If Ethernet is over HDMI, that would mean I could just run a network cable to my receiver and then that would act as the switch to all my units in the rack, that would save the cost of a local switch for bigger installs, plus less cables.

Everything on my network is DHCP, but I've seen plenty of installs where static IPs were used for units for one reason or another (usually for home automation confusion problems)

I just wish they would have come up with another design for the ends. Maybe now it is too late, but, man some push and click style ends would be really nice. HDMIs are always bending at the pins.
BMXTRIX posts on May 11, 2010 08:56

Stereodude, post: 716599
This about it from a networking standpoint. First of all, Onkyo, Denon, Sony, etc are not networking companies. They're being asked to implement something they have very little experience with.

Then lets ask some basic questions.
The list goes on and on…

I think by now it should be pretty clear that it is indeed a terrible idea.

Well, you are definitely convinced.

Cisco owns Scientific Atlanta… Yes, the bonding of the home network and the video world is colliding and it every question you asked has not one thing to do with HDMI, but the components made.

I would bet that Cisco is one of the companies that pushed for this as video over IP, from a cable television perspective opens the door to new content and interactive capabilities, especially when tied into displays which are setup for this type of content.

Really, current A/V receivers have IP addresses, and current TVs do as well. The question is more about how the two can interact over a HDMI connection instead of a standard Ethernet connection.

That, it seems, would be up to the company implementing the product in the first place. My guess is that most items would act as dumb switches, not as routers. IP information would flow, as it normally does, from your router.
3db posts on May 11, 2010 07:44

Stereodude, post: 716654
No offense, but I don't think you don't get it. Those are all perfectly valid questions related to their ethernet implementation. It comes down to whether the receiver is an ethernet switch (nothing like traditional HDMI switching) or a router. There are plenty of valid use case for both paths, and regardless of which way they go it isn't going to work for everyone. Once they go a particular way it opens Pandora's box which is full of follow on questions.

Ask a receiver maker who claims they've implemented HDMI 1.4 and their eyes gloss over when you ask them the most basic ethernet / networking question about what their receiver does and they don't know.

Do you honestly think that the Onkyo, Denons, and Yamahas are all experts in video processing or do you think they hired on the expertise? Video processining is immensely far more complicated then throwing a modified network card into a receiver.
Post Reply