DLP™ technology is based on an optical semiconductor called a Digital Micromirror Device (DMD) chip which was invented in 1987 by Texas Instruments. The DMD is basically an extremely precise light switch that enables light to be modulated digitally via millions of microscopic mirrors arranged in a rectangular array. Each mirror is spaced less than 1 micron apart - that's a thin gap compared to LCD.

These mirrors are literally capable of switching on and off thousands of times per second and are used to direct light towards, and away from, a dedicated pixel space. The duration of the on/off timing determines the level of gray seen in the pixel. Current DMD chips can produce up to 1024 shades of gray.

By integrating this grayscale capability with a 6 panel color wheel (2x RGB), the DLP system is able to produce more than 16 million colors. A DMD system can be made up of a single chip or 3 chips, resulting in even greater color reproduction. For example, DLP Cinema systems can reproduce over 35 trillion colors. 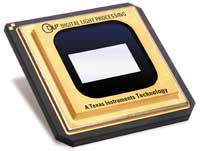 Advances are being made in the single DMD design. For example, Texas Instruments' newer DC3 (Dark Chip 3) design adds a new rear coating to the mirrors and eliminating more of the latent brightness when in the "off" position. Texas Instruments is also embracing LED backlight technology to improve color, eliminate the color wheel, and remove the need for bulb replacement in rear projection sets.

After a long run of 1280x720 chips, TI has finally released a couple new 1080p pixel chips. One is a full resolution 1920x1080 DMD designed for front projection systems and should debut in select 2006 models. The other, however uses a horizontal oscillation technique to make a 960x1080 DMD function for a 1080p display (HP calls this "Wobulation" while Mitsubishi dubs it "SmoothPicture"). We call it "fudging", but it does look pretty good. Right now, DLP is the front-runner in the rear projection technology war and, except for on the price-front, is pretty much cleaning the clock of the likes of CRT and LCD rear projection.

Editor's Note: What is Rainbow Effect?


The DLP 'Rainbow Effect' (or RBE) is an artifact unique to single-chip DLP projectors. The artifact appears as a rainbow or multi-color shimmer briefly noticeable when changing focus from one part of the screen to another. It appears as a secondary image that appears at the viewer's peripheral vision and is generally noticeable when shifting focus from a high contrast area or bright object. For a quick video example of the effect, click here (warning: 5MB video).

Higher color wheel speeds, LED lamp systems, 7+ segment color wheels, and archimedes color wheel designs (pending for years now) are designed to minimize or altogether eliminate the effect.  3-chip DLP systems do not have any RBE because they do not require a color wheel. DLP, however, seems to think that DLP chips are worth more than gold and so, for now, 3-chip DLP projectors cost about 10x the price of entry level 3LCD projectors. Perhaps someday soon they will loosen their grip on the market and the color wheel can finally die the quick but painful death it deserves.