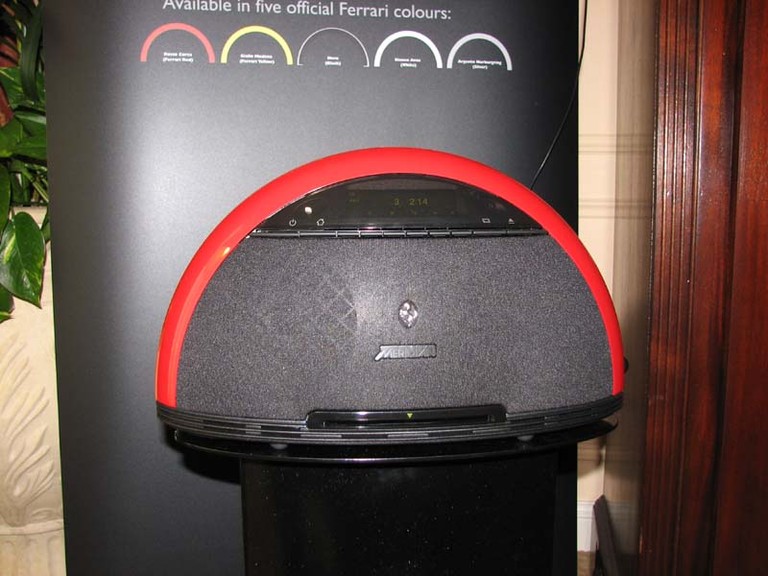 I know what you’re thinking.  Not another clock radio from an audio manufacturer.  When I first gazed eyes upon the new Meridian F80 AM/FM Stereo CD clock radio, I didn’t think much of it.  When the Meridian rep told me the MSRP was $3k, I had a little inner chuckle and it piqued my interest to hear it just so I could report on what a gimmick it was.

What I didn’t expect was to have my misconceptions shattered by the fidelity I was hearing that rivaled many of the “so called” high end demos I heard at the Venetian.  The speakers sounded like they were at least 8 feet apart and there was ample bass for a satisfactory audiophile experience.  This was certainly a product that I am sure would have me looking forward to being woken up to in the morning.

The F80 sports an 80 watt speaker system where the two front drivers handle left and right channel duties and the rear mounted driver handles the bass.  Each driver is housed in its own rigid enclosure and the mineral filled composite that makes up the body of the F80 is similar to that used it Ferrari GT cars.  Just like all Meridian speakers, the crossover network is DSP controlled to properly integrate the drivers and the stereo “widening” and active equalization features utilize Meridians own proprietary DSP algorithms.  There are also built in location compensation controls that optimize the sound if the unit is corner loaded in a room.

The back of the F80 has more in common with an audio component than it does a typical clock radio.  It has optical input and outputs, s-video and composite video, and a port to connect your iPod.  For those that don’t want to leave the convenience of their bed to control the unit, a remote control is provided to operate the unit.

While the Meridian F80 certainly wins no points in the value department, it sets the standard in its category that will certainly please those who shop for the ultimate in performance or prestige regardless of price.