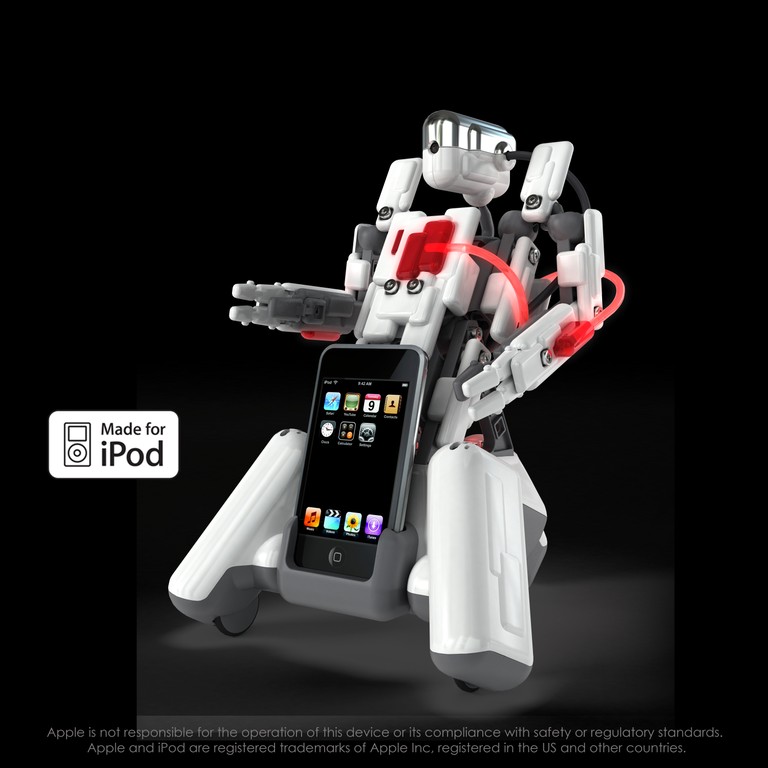 Erector / Meccano, the company that created Spykee, the world’s first WiFi spy robot, introduces three new, advanced robots at CES this year. Spykee Cell, which can be controlled by cell phone via Bluetooth wireless technology, Spykee Vox, a voice-activated robot, and Spykee Miss, a voice-activated gender-specific robot, are being shown for the first time at CES.

Spykee Cell is the robot that you build and can control from a cell phone via Bluetooth® wireless technology. It moves, sees & takes pictures… its head is motorized, and features voice transformation and many light & sound effects. In addition, Spykee Cell is compatible with iPod mobile digital device (and other MP3 players) enabling you to listen to your favorite songs in stereo. You can even see your iPod playlist on the screen of your cell phone! Spykee Cell works as a Bluetooth wireless technology headset: when someone calls your cell phone, you can hang up on your Spykee Cell and speak and listen through your robot. Spykee Cell is easy to build and can be constructed into your choice of two difference configurations. The robot comes with more than 160 pieces, tools and instructions and is compatible with all Erector / Meccano parts. The completed Spykee Cell robot measures 25 cm / 9.84 inches.  Spykee Cell is recommended for children ages 8 and older as well as teens and young adults.  Spykee Cell will be available in retail in October 2008 and will have a MSRP of $199.

Spykee Vox and Spykee Miss are interactive robots that work via an exciting voice-activation feature. Both robots are compatible with iPod mobile digital device, and other MP3 players, can be used as universal remote controls. Spykee Vox and Spykee Miss speak and understand either English, French or Spanish according to the version you buy. These robots express emotion, responding to the human voice with various movements, facial expressions, sounds and light effects. When given a voice command, they will obey, move and can even detect frontal obstacles. Both robots are pre-programmed with dual personalities – good and evil.

You can also program them on your computer.  Their easy and fun interfaces let you create new movements, faces, lights and sounds.  Spykee Vox and Spykee Miss can also turn on electronic devices such as a television or DVD player via infrared control.

Spykee Vox has many attack functions that will provide hours of fun for young & grown up boys… He is easy to build in your choice of three configurations.  The robot comes complete with more than 200 pieces, tools and instructions and it is compatible with all Erector / Meccano parts.  Spykee Miss is the girls’ interactive friend that gives advices, wishes you a happy birthday… She has more than 70 pieces including pretty accessories such as angel wings, stars and halos. Spykee Vox and Spykee Miss measure respectively 31 cm / 12.20 inches and 30 cm / 11.81 inches when completed.  Both robots are recommended for children ages 8 and up as well as teens and young adults.  Spykee Vox and Spykee Miss each have a suggested retail price of $149.  Both are expected to be available in retail by October 2008.