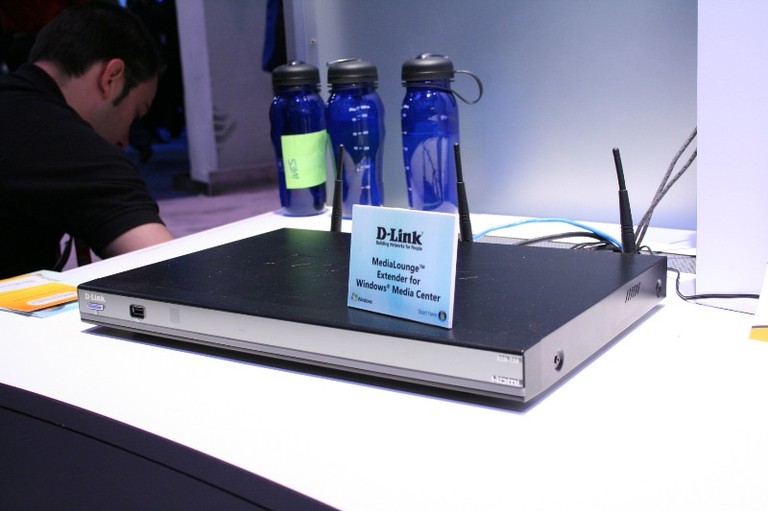 Microsoft was touting a number of media center extenders (other than the Xbox 360) at CES this year. The DSM-750 from D-Link features dual-band wireless Draft 802.11n technology for fast Wi-Fi performance, making the wireless streaming of high-definition video possible. It also offers content from more than 21 providers - including sports, movies and other entertainment. The box as small as a DVD player and seems to have the performance to match. The DSM-750 is an Extender for Windows Media Center that allows you to stream media content from a Windows Vista Premium or Ultimate OS-based PC to a High-Definition TV or Standard-Definition TV. Additionally, Windows Media Center allows you to access and enjoy a large and growing catalog of online entertainment, sports, and news content—all from the comfort of your living room.

If your Windows Vista Premium or Ultimate OS-based PC has an integrated TV tuner, you can watch live TV or record a TV program with Windows Media Center, which features an Electronic Programming Guide that provides schedules for both subscription-based cable/satellite and terrestrial (over-the-air) programming. You can even pause or rewind live TV.

The DSM-750 supports HD video resolutions of up to 1080. To allow steady streaming of HD content over a wireless network, the DSM-750 utilizes draft 802.11n technology, which provides faster speeds and farther reception compared to 802.11g. Since a majority of wireless devices use the 2.4GHz band, the DSM-750 also utilizes MediaBand technology, which provides the option of using the 5GHz band to help minimize interference with common wireless devices, thus improving streaming performance.

The DSM-750 supports HD video in either Windows Media Video 9 or MPEG-2/4 format. Enjoy videos with resolutions of up to 1080p. The DSM-750 includes both HDMI and Component Video outputs and also works with standard definition televisions with S-Video or Composite Video inputs (Composite Video cables included).

The D-Link MediaLounge DSM-750 offers the best of both worlds since it can be used as an Extender for Windows Media Center or a Wireless HD Media Player using MediaLounge. The DSM-750 is available for pre-order for $329.99. For more information, please visit www.dlink.com.