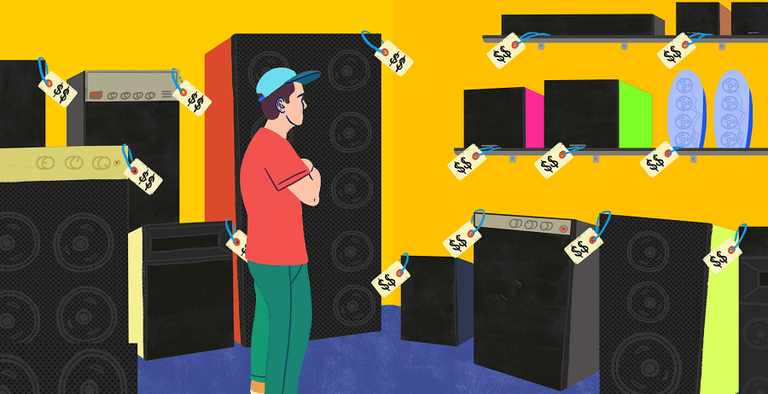 The audio industry is full of ambiguity, leading to common misconceptions by consumers, and thus marketing opportunities by manufacturers. Additionally, the unknowing consumer tends to make their own assumptions, not based on engineering principals, or logical assumptions for that matter, but on their ideas as to what they perceive as right from wrong from the propaganda printed on sales literature or spewed by sales people or chat forums. Listed below are some of the common misconceptions in audio. It is my hope to shed some light on these topics and minimize their ambiguous nature.

This speaker is better than the other one because it plays louder.

Efficiency has little to do with how well a speaker is going to sound. In many cases, the more efficient design represents a compromise of performance and fidelity for efficiency. High efficiency is usually accomplished by using a horn loaded driver and thus resulting in compression of soundstage, off axis response and smoothness. However, more efficient designs are better suited for use with Receivers due to their power supply and sustained output current limitations, leaving the better, no compromise designs for the more ample and tastier separates.

This Speaker System or Receiver must be better than the other brand/model because it costs more money.

More money does not always guarantee better performance. A simple example of this is to compare a subwoofer satellite system from companies such as Energy to the infamous, more expensive, and poorer performing "cubed" speaker system counterparts from the company with ingenious marketing that we have all grown to love to hate. In addition, there are many cases where a bookshelf speaker from a particular company, outperforms the larger more expensive model from the same series. Bottom line is to let your ears, not marketing literature, hype, and cost, be your guide.

This amplifier is better than the other one because it runs much cooler.

You can't judge an amp by how cool it runs. The cool cat usually has may have less idle current biasing and thus operates more into Class B than in AB, or it may be a digital amp which can often lead to lower fidelity due to added distortion or noise. The amps with large heatsinks, big linear power supplies, and multiple cascaded output devices tend to run hotter because they are biased heavily into Class A operation, thus usually ensuring better linearity and overall performance while sacrificing efficiency and generating lots of heat as a penalty. However, it is often more the case than not that most consumers simply don't need this much power for their needs thus one should never buy an amp based solely on sheer power. Never trade power for compromised noise floor unless your only objective is sound reinforcement!

This receiver is "higher current" than the other one.

Many receiver companies boast unrealistic claims about the current capabilities of the power sections in their receivers. They do this by making an instantaneous measurement lasting only microseconds to boast outrageously and unrealistic amperage ratings of 50,60, or even 70 amps. The truth of the program material such as, bass notes, pipe organ, wind flute, etc usually require the most current to reproduce, and are sustained for up to several seconds! Certainly these receivers or amps for the matter cannot deliver this level of amperage for any lengthof time, nor should the speakers or wire for that matter be able to sustain it. If you want to know the true current capability of a receiver, check the value of the rail fuses. These fuses are either located near the power transformer and filter capacitors, or on the amplifiers circuit board. There are usually two fuses per channel. (Do not confuse these with the AC line fuse normally found near the power cord.) Check the ampere rating written on the rail fuse. If, for example, each fuse has a 3 amp rating, the amplifier is capable of 6 amps per channel. It's that simple!

This Receiver is THX Certified so it must be better than the non-THX Receiver Receiver.

I am sure George Lucas would like one to think this way, even though it may not necessarily hold much truth. THX is a licensing agreement between audio companies and Lucas. It is a set of minimal standards and post processing, which can enhance product performance and the listening experience, but not having it doesn't necessarily hinder product performance. In order for a product to receive the THX stamp, it must meet these specified standards, and the Manufacturer must pay royalty fees for the name. What's unfortunate is consumers sometimes purchase products that only have a THX stamp on them, often bypassing sometimes better or equal products which easily exceed the THX standards and sometimes offer better post processing alternatives.

This Receiver is more powerful than the other one.

The power game that many receiver manufacturers play can be most misleading. There are so many multi thousand dollar flagship receivers on the market these days that claim over 100 watts a channel times 5 or even 7 channels. Let think about this for the moment and take a look at one of the top receivers on the market, the Denon AVR 5800.

The Denon AVR 5800 claims 170 watts/ch for all 7 channels. If this implies continuous power for all channels driven, than the receiver must consume (170*7) / 0.40 (efficiency factor of class AB) = 2975 watts for the power section alone. This is an iimpossible feat considering that the common wall socket can only produce 120V*15amps = 1800 watts. This means you must plug this bad boy into its own dedicated line to achieve these power levels, assuming the power supply is up for the task (1200VA power supply featured in this receiver, cannot) and your wall socket is capable of delivering about 25amps which is 10amps greater than a standard receptacle.

The fuse rating on this receiver is 11 amps. It is common practice in engineering to derate a fuse to 75% of its maximum sustained current ratings. Thus the Receiver should not be able to deliver more than 0.75*11 amps = 8.25 amps. That being the case, the maximum power delivery of this receiver cannot exceed 120V*8.25A = 990watts (assuming you using a 20A dedicated line and holding it constant with a Variac or regulation). Since this receiver has one common power supply, it must share with the processor, preamp, etc. Lets assume the processor/preamp consumes 100 watts, this leaves 990 - 100 - 890 watts available for the power section. Take 890 watts divided into 7 channels equals a whopping 127 watts /ch which is almost half of the specified power ratings! If we don't consider derating the fuse, than the total power available would be 120V*11A = 1320 watts - 100 watts = 1220 / 7ch = 174 watts / ch which but would require over 3000watts of delivery from the outlet or a 25A line which isn't going to happen especially since UL derates power receptacles to 15A max for safety reasons.

So you are probably wondering how Denon or any company for that matter can get away with this? The answer is; they never claimed the receiver could deliver 170watt/ch with all channels driven. They rate power for each channel driven instead. Again, the average consumer does not know this and thus chooses this receiver based on big power ratings. The point of this exercise to is bring awareness to consumers on how power is rated so that when they compare Receivers/Amps from competing manufacturers, they know if they are making an apples to apples comparison with respect to the power game.

When judging power, look for the following:

It is not the intent of this article to single out any particular manufacturer for any wrong doings in the industry. It is the intent however to point out how misleading specifications, literature, etc can be to the average consumer. It is my personal belief that measures should be taken to help clarify to consumers the relevance of this information they are digesting and thus that is the basis of why Audioholics exists.