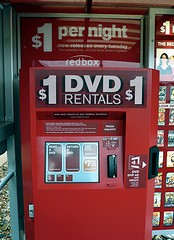 It would seem that $1 per night video rental kiosks have pissed off certain Hollywood studios.  Universal Studios, under the guise of so called revenue sharing deals looks to be using tactics of questionable legality to force kiosk operator into flagrantly unfavorable deals.  Deals that the kiosk operators have been told they can’t refuse.  But refuse, some have, with kiosk operator Redbox filing a lawsuit against Universal for violating anti-trust laws.

A number of commentators have suspected Universal’s motive to be purely anticompetitive and it turns out they were right, but few guessed how directly anticompetitive Universal’s actual goal would be.  So, what is a studio to do with all of those people who make money renting movies from kiosks after they are sold by the studio the first time?

Why, drive them out of business in preparation to open up your own kiosks of course:

The story starts with Universal executives Dick Longwell and Jamie Guzzaldo who showed up without notice August 26th at Redbox’s headquarters with the revenue sharing agreement.  Universal demanded that the agreement be signed by December 1st and backed the demand with threat of cutting off DVD supplies to Redbox by cutting off wholesalers, Video Product Distributors and Ingram Entertainment, who distribute discs to Redbox.  Universal also laid similar agreements on at least one other kiosk retailer, DVDPlay.

Under the terms of the agreement, Redbox would lease DVDs directly from Universal at fixed minimum prices between $8 and $12, depending on gross box office receipts, or hand over 40% of gross rental revenue per unit, whichever is greater.  Universal price fixes at a rental floor of $0.99 in the agreement.  Universal also demands that the retailer is responsible for all applicable taxes on any rental transactions, allows Universal to claim any tax credits due the rental business, payment of shared revenue is due Universal even if the retailer is unable to collect rental fees from customers, and the retailer must pay Universal for any lost or stolen copies.

On top of those terms, the retailer does not get copies for rental until 45 days after street release and can keep no more than eight copies of a movie in any one kiosk.  After any rental copy is taken out of service, it must be destroyed.  Finally, the retailer is responsible for keeping detailed records for Universal, is subject to third party auditing of all books and kiosks at Universal’s discretion, and is liable for the cost of the audit if any discrepancy exceeds 5%.  Oh, and if anyone sues for any reason, the retailer will pick up Universal’s legal bills.

The 45 day rental delay alone would be enough to kill these types of limited inventory rental businesses.  A kiosk based rental business lives and dies on availability of new releases.

Sound more like Universal is looking to kill these businesses, doesn’t it?

Revenue sharing agreements are usually about means to increasing a market through mutual cooperation and sharing the increased revenue as a benefit of that cooperation.  This agreement makes it pretty clear that it is about protecting the DVD sell-through window from low price rental competition after the studio releases a given movie for sale by stating the following:

An agreement as inequitable as this is fairly ripe for scrutiny about the true motives of the company behind it.

That’s what Redbox thinks so they are now taking Universal to court over illegal business practices that fall afoul of antitrust laws.

The suit names as defendants Universal Studios Home Entertainment (USHE) along with affiliated companies, Universal City Studios Productions, Universal City Studios, and Focus Features who distribute through USHE.  Allegations against USHE include violation of the Sherman Antitrust Act (15 U.S.C. §§ 1), copyright misuse (17 U.S.C. §§ 101), and tort interference with existing contracts between Redbox and its distributors.

3. Under the guise of a “Revenue Sharing Agreement” (attached as Ex. A), Defendants seek to eliminate the low-cost rental alternative for consumers. Specifically, Defendants want to: prohibit Redbox from renting or selling Universal DVDs until after 45 days from when they otherwise become available to the public; limit the number of copies of Universal DVDs that Redbox kiosks can stock; and require that Redbox ultimately destroy all of its copies of Universal DVDs so that previously-viewed DVDs cannot be sold at a low price to consumers. To drive home its “take it or leave it” proposition, Defendants will terminate Redbox’s two distributors (VPD and Ingram) if they continue supplying Redbox with Universal DVDs or providing other services to Redbox – unless Redbox forsakes its customers and participates in Defendants’ attempts to decrease the supply of copyrighted DVDs, reduce consumer choice in the marketplace, and increase prices that consumers pay during tough economic times.

In addition to seeking damages and legal costs, Redbox is seeking a declaration of copyright misuse rendering Universal's unenforceable for the duration of the period of misconduct, injunctive relief prohibiting USHE from engaging in any efforts to limit the supply of Universal DVDs to Redbox, and declaration that the Revenue Sharing Agreement and USHE’s threatened action against VPD and Ingram violate the Sherman Antitrust Act.

It is fairly common knowledge that entertainment releases, movies, music, video games, or whatever, typically do the majority of business immediately after release for either sell-through or rental.  Over time interest quickly tapers off and asymptotically approaches a near zero value.  In the complaint, Redbox lists the amount of business in the 45 day window as 60% of the business a given title will ever do.

A 45 day waiting period captures the majority of interest in a title over a time where the movie studios (incorrectly) see every rental as a lost sale, so eliminate the competition with rentals.  Then these uppity rental businesses turn around and exercise Doctrine of First Sale rights further by selling used DVD inventory as interest wanes on the secondhand market, again competing with new sales from the studios.

It’s also no big secret that the entertainment industry hates the secondary market for media and sees anyone engaged in it as somehow taking their money.  The thinking in the industry seems to be along the lines that the media contains their copyrighted intellectual property (IP) and that even though consumers have paid for the media, because they have copyrights on the contents, somehow they still own the media, as evidenced by years of trying to couch sales as mere rentals by including shrink wrap licenses disclaiming the taking of consumers money as a sale.

17 U.S.C. § 109. Limitations on exclusive rights: Effect of transfer of particular copy or phonorecord

(a) Notwithstanding the provisions of section 106(3), the owner of a particular copy or phonorecord lawfully made under this title, or any person authorized by such owner, is entitled, without the authority of the copyright owner, to sell or otherwise dispose of the possession of that copy or phonorecord.

This is the legal basis for the Doctrine of First Sale, which applies to copyrighted works as well as patents.  Yes, the IP holder, copyright or patent, still holds the rights to the underlying ideas behind a work or product, but when they sell a particular item based on the protected idea, they no longer own that particular item.  Owners of legally obtained copies can do with a particular copy as they wish.  Content owners hate that stuff.  Movie studios hate rental businesses and the music and gaming industries hate used sales shops for music and games, but they are all perfectly legal.

The Redbox complaint goes on to establish the monopolistic nature of copyrighted work, and thereby, how USHE is exceeding the law with respect to copyrights.

Redbox then outlines the anticompetitive behavior that USHE is engaging, outlawed under the Sherman Act, to control the market, eliminate competition, and limit supply driving up prices paid by consumers.

65. The restrictions demanded by USHE in the Revenue Sharing Agreement constitute a naked restraint on output that will decrease the supply of copyrighted DVDs, reduce consumer choice in the marketplace and increase prices that consumers will have to pay to rent DVDs.

Everything that Universal is pushing not only hurts Redbox, but hurts consumers as well, forcing them to pay higher prices either for other rental options or for retail purchases.  Most other rental options, physical and downloadable, cost at least three to four dollars.  Redbox renting at $1 a night provides significantly more incentive for consumer to rent verses the $15-$20 retail sell through of DVDs.  Then, with all of those rental discs released into the market as used it further redirects consumers from purchasing new DVDs; damn competition.

Every contract, combination in the form of trust or otherwise, or conspiracy, in restraint of trade or commerce among the several States, or with foreign nations, is declared to be illegal. Every person who shall make any contract or engage in any combination or conspiracy hereby declared to be illegal shall be deemed guilty of a felony, and, on conviction thereof, shall be punished by fine not exceeding $100,000,000 if a corporation, or, if any other person, $1,000,000, or by imprisonment not exceeding 10 years, or by both said punishments, in the discretion of the court.

Up to ten year in the Big House and a million or a hundred million of dollars in fines, for individuals and corporations respectively, certainly make it sound like conspiracy in restraint of trade is not considered minor criminal activity.

Now with the revelation that Universal is going directly into the kiosk business for themselves over in the UK, it makes the assertion that the studio’s true motives are to strong arm the competition out of the market, perhaps before a US launch of said kiosks, very plausible.  Protect the sell-through market from third party rental and resale competition and then replace them with studio owned kiosk services for direct sell through.

As it always seems for the studios, it’s a double standard.  Movie pirates should be burned at the legal stake, but illegal activity is just fine for them if it fattens the bottom line.  So when they are not trying to shake down preschools for licensing fees, they are out smiting legitimate rental businesses through copyright monopoly power and attempting to put them out of business.

It will certainly be interesting to see how USHE and friends attempt spinning that in court to wiggle out of their predicament.

Gladstone, post: 494924
I noticed there were a few blu ray titles in the local redbox machine. Hopefully redbox slows them down.

Awesome. I heard about it: http://forums.audioholics.com/forums/showthread.php?t=50122

Were they a $1? Do you know which titles?
Gladstone posts on December 10, 2008 16:25
I noticed there were a few blu ray titles in the local redbox machine. Hopefully redbox slows them down.
Seth=L posts on November 12, 2008 22:49
I wish I had bought stock in redbox as soon as I saw the first ones come out. But when I found out it was part of McDonalds I figured it might be pointless. (also I had no money)
GlocksRock posts on November 12, 2008 10:02
Good for them… I dont' use Redbox very often, but I do get their free coupon codes once or twice a week, an do use them on occasion. I hate to see the big greedy studios try to throw their weight around, hopefully Redbox will win this one.
jamie2112 posts on November 11, 2008 20:15
Good for the little guy. I hope Redbox wins this monsterlike lawsuit….
Post Reply