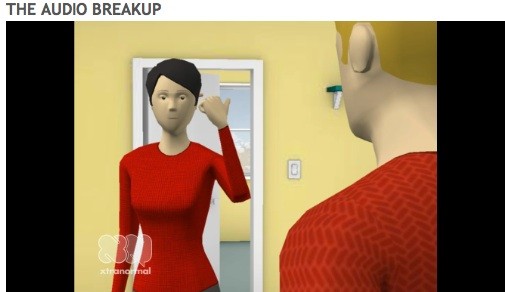 She may look calm but inside she's seething

Witness an Audioholic world where surround sound is important. Important enough to make or break a relationship. In this Audioholic world, if you aren't rocking dual subwoofers, huge speakers, and a dedicated home theater, you aren't worth much. It's a speaker-eat-speaker world where you'd rather have a picture in your wallet of your room's frequency response than of your kids. Where the first question on the SAT is "Who designed the first MTM speaker?" Where children are sent to orphanages for pushing in dust caps. It's a place where the quality of a man is not judged on his job or car but how much air their subs can push. By how much power their home theater's pull. By having all the latest gear. It's a harsh world where poor sound is not tolerated and wedding rings are eschewed for exchanging amplifiers. The following video is a story from that world. While it may seem strange and terrifying to us, to them, it is an Audioholic life.

Is this your world?

We're going in the wrong direction here. I'd like to see one of these clips twice a day and I'd like them to be four times as long. Getting through an entire review on a piece of gear is like a homework assignment but these clips are like Sesame Street for A/V with an adult theme in an alternate reality. This is better than The Simpsons.
talannar posts on December 08, 2010 09:56
I showed this to my wife and she LOVED it! The great part was she got every issue that was brought up. Her favorite line was “Oh honey, they would eat you alive.”

Would love to see this again. Maybe a monthly installment? I've used that program myself and it can be time consuming.
Post Reply