State of the Art - Part Two: Lowering the Bar 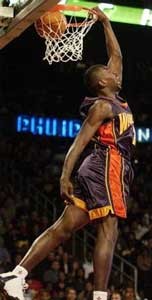 2002. The US National Basketball Team AKA "The Dream Team" was figuratively de-pantsed on National TV. EXPOSED. The US squad, a team of NBA heroes were dismantled and humiliated by the Argentine National Basketball team. Now to be fair, the Argentines were no slouches and the US team surely did not feature anyone near the caliber of Shaq, Kobe or T-Mac. The US squad also wasn't a team that took World basketball as serious as the other countries. This was more an NBA All Star team than a US National Hoops squad. Regardless, the US team was taken to school. Out shot and out fundamentaled. The theatrical slamming, leaping, twisting and showboating style of the Americans was completely neutralized by the sound fundamental play of the Argentines. It was strange to watch. The US team was not bad, in fact far from it. They just had no answer for the Argentine playbook that unfolded more like newsreel footage of the 1950 Indiana Hoosiers than it did the wild & aggro street style we see today. The results were no fluke as the US team crashed out of the tourney in similar humiliating fashion to Yugoslavia and Spain.

Many sports writers decried the team's performance and blamed it on the street style showmanship that has become the norm in the NBA. Fearing that the classic art of basketball was fading with each and every advocate of the fundamental style retiring, many coaches declared that the US's dominance in basketball would soon fade unless there was a return to fundamental play. There needs to be a foundation before frills and flashy add-ons. Kids at home see one style of play these days and ultimately it's the cornerstone of their learning. The stage is set and the bar is lowered from the beginning. What does basketball have to do with art or mixed media? On paper, not much, but in practice, lack of fundamental understanding of any craft, be it auto mechanics or graphic design yields the same result.

In my line of work (TV/Broadcast sound design), I've always disliked the phrase "It's good enough" or "No one at home will ever notice that". The instances in which this logic is applied is understandable in moderation, but become dangerous to the art and the artist when they become the norm. The banner excuse of something being "good enough" is a necessary evil when things are backlogged and workflow is behind to the point of endangering broadcast continuity. But it's damaging when it becomes the battle cry of the lazy or uncaring. It's damaging in that it neuters the artist from displaying the very talent that makes him valuable to an employer, and it's damaging to an audience whose tastes over time are being slowly dimmed as a result of being served up art that is "good enough".

If you read this site with any frequency, and you are not a regular customer of the Olive Garden, I'll assume from your tastes that you are someone with an interest in quality. You are probably someone with an ear and eye for the exceptional, not the acceptable. When the audience is educated, the art will always need to rise to the occasion. As I mentioned in Part 1, it creates an environment where the creator is reminded that they need to keep their standards high if they are to compete.

I get easily annoyed when I see people buying into crap art and thinking it's ok or "doesn't matter". Heck, it depresses me. It makes me wonder what inspiration there is to do my best if no one will even notice. Being an amateur filmmaker, I often run into websites by other filmmakers advertising their craft. Many of these sites are assembled so hastily and without any concern for presentation or quality, you wonder who'd entrust one of these clowns to ever produce anything that demanded quality. I can't speak for anyone else, but someone with a website that contains 30 different fonts, in varying colors and sizes is not going to be handling anything creative for me anytime soon. Unfortunately, this is more insulting than it is funny. I'm sure all of us, regardless of our field, have tasted the frustration of someone we feel to be a charlatan, passing themselves off (and convincing others in the process) as something they are not. It's an unfair, albeit very human, locker room attitude of wanting the new guy to have your skills before he has the right to churn out art.

Whether we like it or not, the people who taught us our skill set, be it teachers or a workplace mentor, probably envied or resented us for the tools we had at our disposal. Tools that allowed us to slip our feet in the door easier than they did. Tools that created an environment where an audience came easier and was not as demanding. Does this cycle beg a solution or is it just a sign of the times? Is it an inevitable symptom of craftsmen and artists trying to stay relevant and appreciated while it realizes that the consumer no longer cares? I say both. While our generation's skill sets and the demand for them will ultimately go the way of the Chevelle, the care in which we create does not need to enter into obsolescence.

If you ever find yourself in the position to be a mentor, embrace today's incredible tools, but also show the young grasshopper how it is done without the crutches. Don't hand out the calculators until they can do it on their own. If you are someone who uses these tools on a daily basis for a career or for a hobby, take the time to learn the fundamental "whys" and "hows" of your craft. As a consumer, patronize and be a proponent of good work. In the end, the best catalyst for higher standards is a greater respect and understanding of what is quality. High art and low art, I love them both - just make it good art.