The State of the Art - Part One 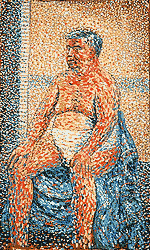 Ask anyone to define the word "Art" and you are guaranteed to not get the same answer twice. Definitions will be as broad as deeming art to be any human creation, from an oil painting to a chromed out motorcycle engine. Others get quite specific, defining it as the type of material you'd hang on a wall or listen to through a pair of $10,000 speakers. You're also sure to hear many people insist that the subjective quality of the would-be-art in question is a factor in whether or not something is art. (i.e. "That's not music, that's just noise", "Those aren't lyrics, those are just swears", "That's not a painting, that's just splattered vomit.") Sadly, the diesel-sputtering mainframes here at Audioholics don't have the space to tackle the question of what is art and what isn't. Instead, I'll try to keep it simple. Let's talk about the art of music, movies, photos, and the Internet. Art that most of us consume often, if not daily.

Let's boil it down to two categories: there is good art, and there is bad art. This is not up for discussion or argument, nor up to the eyes of any beholder. This opinion is final . Art is good or art sucks.

Not since the Renaissance have the human senses been bombarded with so much art as they have in this day and age. Unfortunately, much of it is the kind of open-mic-night fodder I utterly loathe. The proliferation of desktop production, digital video and still cameras, as well as countless graphic and web design programs, have armed legions of geniuses and talent-less hacks to become zee artíste. And, of course, this monster in front of us known as the Internet has given much of this art a home… both as a PR vehicle and as a gallery for the artist. Modern technology and tools are truly a gift for the talented, but they are a nightmare in the wrong hands.

The notion of doing things right seems to be a fading ideal in today's hyper-edited super-sized world. As artists, many of us are too busy and too impatient to create anything with care, and conversely (as consumers who have subconsciously become used to ill-conceived and executed product) we have lowered our standard of expectation. Little matters anymore, and less and less of us are inclined to appreciate quality.

Good art raises the bar for bad artists. It reminds them they have to keep working at their craft, and to give it a second thought before deeming their work "good enough". Good art conditions the audience to expect more, and ultimately, as a side effect, get more. Bad art clutters our shelves, our concert halls, our local film festivals, our TV stations and even the job market. It confuses consumers and lowers expectations of employers - rendering the talented artist obsolete in a cost-driven market rife with low standards.

The "Amateur" Effect (aka "Toddlers with chainsaws")

An acquaintance of mine, a self proclaimed "graphic artist" right out of school, blessed me with the task of giving my honest opinion of some of her sample pieces. She fired over to me a few business cards with self-appointed, generous titles such as "graphic artist" and "designer" along with some Photoshop-generated nightclub flyers. She asked that I give her some feedback as soon as I could. Upon looking at the pieces I became angered. This is art? This is a person who takes pride in their craft? This is a graphic artist's work? The colors, the quality, the attention to layout and effectiveness were absolutely nonexistent. It was a maelstrom of stock PhotoShop plug-in's and cheap freeware fonts in such a baffling array, I couldn't figure out whether the ad I was looking at was inviting me to a nightclub or was informing me that the designer of the flyer had 200 fonts available at her disposal.

At that moment, I had a vision of my grandfather with his callused and trembling hands hunched over his desk every night slicing letraset with a safety razor while laying out ads and designs with the utmost of care. He didn't have PhotoShop. He didn't have a backup hard drive or an undo button. He couldn't enter a logo onto a page and scroll through font after font until one looked good. He had to study the layout; make calculated and tasteful decisions; make sure the letter kerning was good. He had to check that the serif was where it should be. These skills had to be learned as easier options were not available.

In all fairness, my grandfather was naturally talented. He was one of those guys who could just pick up a brush or pen and make magic. I'm sure you know of those types as well. There are still people cut from my grandfather's cloth, people with fundamental skills who are embracing new technology and doing amazing things with it. It's the art school hacks who are getting their hands on these tools that are scaring the crap out of me. It's almost the artistic equivalent of rogue nations getting their hands on dirty bomb blueprints. A fundamental knowledge of the things that are specific to any craft should be a prerequisite for those doing it.

My "graphic artist" pal that I mentioned previously shares the same job title (though self-appointed) as many talented and qualified artists. She will be cluttering the job market (and quite possibly your senses) with garbage. This person will be peddling her flyers and posters to someone who won't expect much and who won't get much. The customer won't care that the colors are off, or that the flyer doesn't effectively push its intended product. It will be "good enough". It will also be "good enough" the next time he places an order and bypasses someone better equipped to do the job right.

"The more idiot proof the machine, the more likely it is to bring out the idiot in the user"
I'm not sure whose quote that is, but it speaks volumes about the quality of product out there and the people producing it.

There was a time where knowledge of lighting and camera basics were bare minimum pre-requisites to becoming a filmmaker; where a basic ability to draw and a good eye were necessary skills for any graphic designer. There was a time when experts in their craft did not have the luxury of undo buttons and Pentium computers. It forced the craft's practitioners to do things the right way with the most basic of tools. It inspired the artist to do the best they could and not allow the tools to be a hurdle, but rather a necessary step in achieving high quality. The modern "artist" has so many technological crutches he wouldn't know how to walk without them. Go to any skiing school and you'll find that you learn to ski without poles before you have the luxury of using them. That way, you understand the basics - and you learn to do them without assistance. The second we introduce these artistic tools into our arsenal, we lose the motivation to learn it the real way - the right way. We have a crisis on our hands here, folks. Desktop Saruman. Goateed hacky sack-playing orcs streaming out the backdoor of your local art academy. Full on, Dolby Digital, broadband, miniDV, Photoshopped suck . Bad art.

Now before anyone starts yelping that I don't recognize the value of these modern tools, let me reassure you, I embrace them and use them on a daily basis. I'm also not insinuating that just because someone knows the fundamentals of any art that their product is guaranteed to be good. It's simply the fact that these tools have empowered one too many shyster wannabe's to churn out crap. Crap that would most likely have never come to fruition 30, 20, or heck, even 10 years ago. I'll use an example that perhaps many of you will be able to relate to: Super 8 cameras. Those glorious home movie apparatuses your Dad would whip out on Fourth of July picnics or Christmas mornings. Haven't all of us at one time or another been treated to a crackly projected image of our cat eye glasses-wearing, leather-lipped Great Aunt gnawing on a slimy margarine covered corn cob, or even ones of ourselves, tearing open a present at a childhood birthday party?

While the typical home moviemaker is not what I would qualify as an "artist" per se, the point is pretty universal. The relative effort and attention it took to operate a Super 8, demanded the operator be aware of things that a typical modern home video user doesn't even think about. Unlike MiniDV or any video camera, Super 8 is actual film. There is no going back and recording over things you don't like. You can't just pop it out of the camera and preview it on your TV. You don't have a video viewfinder to see what the image that you are shooting looks like as it comes through the lens, and you don't have a piece of media that will store 2 hours of footage. Before you pull the trigger on your Super 8 or tell a group of people to say "cheese" while they look into your 35mm SLR, you had better have your subject perfect. That's right, you actually have to take into consideration the light in the room, the framing, the focus, the shutter speed, film sensitivity and every other element you'd never have to consider when shooting on a video camera or even a modern digital still camera. The idiot-proofing of these modern machines have insured you'll never need to worry about such bothersome "hurdles" such as quality.

The point and shoot artists of today have the freedom to skip steps - steps that are the foundation to any piece of good art. If that weren't bad enough, this pox doesn't end with the artist - it's infected the audience as well.