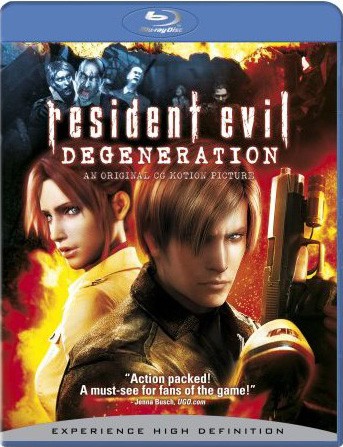 The new Resident Evil film dubbed: Degeneration will whet your appetite for the upcoming Resident Evil 5 video game. It’s a departure from the live action movies that came before it. This installment of the film is taken into the universe of the original video game. Gone is Milla Javovich’s Alice for Claire Redfield and Leon Kennedy, names that fans of the video game series will find familiar.

This new direct-to-video release will be available on Blu-ray or DVD on December 27th. It’s a computer animated movie that probably wouldn’t have received much attention at the box office. But the film is a professional production worthwhile to any anime fan and a must-see for fans of either the video games or movies.

The early part of the film involves the reintroduction of the T-virus into the population at an airport. Sadly, this fact along with a spectacular plane crash is spoiled by the Blu-ray disc’s menu system. But I suppose reintroduction of the T-virus shouldn’t have been much of a surprise - you can’t have a Resident Evil movie without a zombifying virus.

I don’t think it’s an insult to call Degeneration an example of style over substance. The movie is a fantastic, action-oriented romp. From braining zombies with automatic weapons the story only pauses now and again to pay heed to a sort-of plot where pencil thin characters work through their personal melodrama through overacted dialogue. Then it’s back to the beautiful action. Most of the actors have experience with video games and other animation and it shows.

The animation is masterful, the perspectives given to violent action are creative and in true Japanese style often artfully composed on screen. The detail of many of the 3D objects is so lifelike it’s difficult to tell it’s actually animation. Near the start of the film a plane takes off into a sunlight sky. The depth in the animation was amazing to behold. The blue sky against the metallic sheen of the jumbo-jet looked incredibly real. The only give away that it was animation was a lens flair simulating focused sunlight just off the screen.

People look amazing but the realism is scaled back on the characters. Sure you’ll get flowing hair and incredibly life-like movement – but you won’t mistake it for video footage.

On the negative side the lip-syncing is way off. This is at once a credit to the animation that we can see lip movements but it’s also annoying. There are also annoying graphical inconsistencies like characters hair magically being dry and free flowing as they emerge from water.

But the main reason you watch action packed anime is for the choreography of the violence. I am pleased to report it’s top-notch. Director Makoto Kamiya doesn’t have a lot of experience with top budget CG direction but he does have plenty of experience with special effects in Japanese anime circles.

Digital animation clearly looks its best on a high definition format like Blu-ray and Resident Evil: Degeneration looks magnificent. Sony Pictures does a consistently wonderful job bringing out eye-catching realism. This film shines especially in the rare brightly lit scenes. Unfortunately for its video presentation the film spends most of its time in shadows. That’s no knock against the technical quality, it just seems to look better in the rare sunny scenes.

If you thought the well-choreographed action was great, the soundtrack backs it up perfectly. Every explosion and complex acrobatic and gunshot holds you on the edge of your seat with remarkable acoustics. Environmental sounds are consistent and its use of surrounds and low frequency effects are mostly loud yet enjoyable as it fits the material.

Interactive Picture-in-picture: You can watch the film in interactive mode which intermittently lets you view either storyboards or a animation used in the making of the film.

Pop-up Trivia Track: Remember pop-up videos? It’s like that except it has facts about the movie while viewing. Often you’ll get tidbits about the character’s back-story from the video game series.

The Generation of Degeneration: A half hour long featurette of interviews with producers of the film. They’re in Japanese so you’ll need English subtitles.

Character Profiles: The name says it.

Voice Bloopers: It’s a collection of scenes where the voice actors were playing with the material giving us the lighter side of life with zombies.

Faux Leon Interview: Interview with the actor who voices Leon. He’s not a very good actor and puts in one of the worst acting performances in the film but you may recognize his voice from other video games.

Resident Evil 5 Special Footage: Fans of the video game will want to see this. Less than five minutes of footage from the upcoming Resident Evil 5 video game. It might have been nice to see a playable demo but I guess they weren’t ready to offer one when this film was released.

BD-Live: BD Live as you may know provides downloadable never-before seen features. None happen to be available at this time but if Sony decides this is where they’ll be.

There are better examples of computer generated animation. It features the kind of top notch animation you might see in a Pixar film – but instead of all-ages fare you’ll get beautifully choreographed violent horror action. For fans of the video game or movie series – you don’t have to be a zombie to see this one’s a no-brainer.

I hate how they switch actors/actress as if no one will notice. Its also rather strange how sometimes a sequel will come out and the budget is probably 1/5th of the last one, just makes you think like, wth is going on here are you serious?


But I LOVEDDDD playing the RE games or game cube. That was back in the day when life was fun, me my little brother and his friend would turn the lights off and play it. Get a bunch of candy and pop and stay up all night, good times.
j_garcia posts on January 03, 2009 11:43
Definitely a rental since the BD is priced at $27.
Ito posts on January 02, 2009 01:26
I think this one is going to get a rental, but I am still excited to see it
darien87 posts on December 20, 2008 19:24
They show you about the first 5 minutes in the theater in Playstation Home. I wasn't impressed. The lip movements are really bad. It's hard to tell if they're supposed to be speaking English or Japanese, because sometimes the lips seem to sync up with the audio and sometimes they don't.
Post Reply