On the 17th of March, a day made famous by green beer and angry Irish men, an unfortunate event took place" OPRA's wife went into labor.

Unfortunate only in that OPRA had big plans for the day that involved heavy drinking and a wife that was, by medical condition, the designated driver.

Try as he might, he couldn't get her to agree that her "pain" was "all in her head" and that she should just "suck it up" and drive him to the nearest bar.

She managed to convince him that a woman in that much pain can achieve superhuman strength at a moment's notice. With head hung low, he proceeded to take her to the hospital where he saw a very misleading sign which at first raised his spirits and then dashed them. Being the Audioholic he is, OPRA couldn't help but notice that the birthing room was equipped with an entertainment system that included movies on demand. Thanking his wife for insisting that he bring the camera, he proceeded to test out the system in the hopes that others will do the same so that hospitals could be judged in the future not on the quality of their care, but on their ability to keep husbands entertained as their wives curse their names.

When I entered the birthing room, I really wasn't expecting much. I mean, it is a hospital after all. But when I saw the wireless keyboard on the nightstand, my interest was peaked. Honestly, who expected that? A remote was also included with the set up as was a corded phone. The phone was the most disappointing of the equipment as you had to manually turn it on and off via a large red button on the back of the unit. Plus, corded?! I haven't used a corded phone since the last time the power went out before cell phones. Talk about ancient technology!

The keyboard was covered in a protective plastic reminiscent of my great-grandmother's couch. I tried to remove it but the nurse started freaking out. I tried to explain to her that I am a professional reviewer and that I know what I am doing but she wouldn't hear it. Reluctantly, I agreed to leave it on when they threatened to kick me out of the room. My wife was relieved that I was staying but a bit dismayed that it was the threat of being parted from the system and not her that got me to stay. 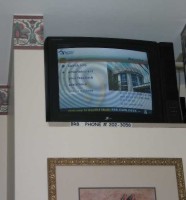 The first thing about the system that intrigued me was the opening menu. As is my habit, I immediately opened the menu options to see if the system was optimally configured. Much to my surprise, it was an actual menu! As in food. This is an option that I think Yamaha and Denon as well as others should really look into. Breakfast, Lunch, and Dinner were all options though Brunch and Snacks were noticeably absent. I guess since this is the first attempt at this sort of functionality, they wanted to get the basics right first. Plus, it gives them room to grow and expand, penalizing early adopters and rewarding the patient. I could see my AVR-3805 networked to a small screen in the kitchen where Mrs. OPRA would be waiting for my next beer or nachos order. What a great idea!

The "assistance" option basically just called the increasingly irritated nurse. I tried to explain that I needed to test how consistently the system worked. This led to more shouting and threats to which I eventually acquiesced… then tried it one more time. A large nurse who looked like he worked mainly with people who were carted off in padded vans took the keyboard and remote away forcing me to "acquire" another from the room next door. I discovered that every remote worked with every unit - a definite problem if your neighbor has the same system as you. I can see it now, two antagonistic neighbors changing each other's channels. Hopefully, the manufacturer of this system will address this in future iterations of the system.

Oh, and Mr. and Mrs. Fenally, I'm deeply sorry for having disturbed your "beautiful moment" in my search for remotes and I acknowledge that you'll never be able to get that back. You son is very beautiful contrary to my, "Oh my God! There's an alien attacking her!" comment on that fateful night. I had no cause or justification for interrupting you and for that I am deeply sorry. In my defense, it did look like your son was attacking you and you do have to admit that he bears a striking resemblance to E.T. But once again, I'm sorry.

The "feedback" option was at first skipped because I didn't think my wife could take any more high pitched squeals other than the ones she was emitting. I found out later that the feedback was really a survey on how the hospital in general (and the nursing staff specifically) were doing. When I gave my honest feedback, it apparently set off klaxons and alarms all over the hospital. Before I knew it, I had a gaggle of angry nurses clucking like hens at something I'd said. That big nurse, in particular, seemed disturbed as he kept dragging his thumb across his throat. Luckily, shift change was imminent and most of the animosity subsided afterwards.

The entertainment section was chock full of stuff to do but it was hard to concentrate and really test it all with all that screaming and cursing. The movies on demand were a blend of new-ish and classic movies, large enough that you'll probably find something you'll like but small enough that it will lose its novelty after a short time. They offered 24 hours of free movies (24 hours in a birthing room?!) but then charged you afterward in an apparent bid to get you hooked, much like a crack dealer. I resisted and moved on.

The Internet is where this system really failed. As you can see from the picture, it's 640x480 screen was woefully inadequate to do any sort of serious surfing. Unfortunately, the TV was a good 20 feet away so if they made the font any smaller, it would be illegible. Honestly, the only fix to this would be to get at least a 40 inch screen. The TV was 13-15 inches and the picture quality was atrocious (more on that later).

In addition, the system had some fairly heavy restrictions on Internet usage. There was even a disclaimer that many sites wouldn't work on this system. I felt like I was in China. I was much relieved when I navigated to Audioholics.com easily. Where else is there to go on the Net?

I wasn't able to test the rest of the system because my wife insisted that I stop and take pictures of my new son. Apparently, he wasn't the Fenally's son as I originally thought though he looked surprisingly like their alien child. My wife assured me that he was mine so I guess I have to believe her - at least until he's old enough to test his golden ear. If it turns out to be tin, Mr. Fenally, I'm coming for YOU!

Two things were really wrong with this system: the cabling and the power. Everybody talks about hospital grade this or military grade that but from what I've seen, hospital grade ain't all that. As you can see, the connections to the display were simple RG-59 even though higher quality outputs were available. The cables were thrown willy-nilly without regard to what sorts of static discharges they might pick up. Plus, I saw power cords and interconnects crossing at non-right degree angles! Sacrilege!

To make matters worse, the unit was plugged directly into the wall (not pictured). Anyone who's anyone knows you need clean power to such a high current unit. Luckily, I found a UPS next to a computer with absolutely nothing plugged into it. I moved that over to the vertically-mounted cable box unit (which I think has something to do with a gravity-assist amplification method that has long been rumored to be in development) and saw a marked increase in clarity, definition, and resolution. Anyone who has not seen a difference in picture quality after introduction a power conditioner is either a liar or has glass eyes (the equivalent of tin ears).

The remotes were mostly functional and I had no real problems with them except one: The keyboard has a joystick that I thought would be the equivalent of a mouse except it wasn't. It was like a second

set of arrow buttons. For the most part this is OK except when surfing the web. With such a small display and the necessity of a small font, "arrowing" over to what you want is simply unacceptable. Clearly, this is an aspect of this unit that must be immediately fixed.

There are quite a few recommendations I would make to increase the effectiveness and usability of the system.

I've decided to reserve rating this system as it fails in some pretty spectacular ways. Until some of the recommendations are addressed, I would simply suggest that you not invest in this system at this time.

Discuss This Article
STRONGBADF1 posts on March 22, 2006 19:17
Congrats for the STRONGBAD household also!!!


p.s. Wake up it's time for the 2am feeding!
ironlung posts on March 22, 2006 09:41
Congrats to Mr. Nomas. Hope everyone is happy and healthy!
Audioholics posts on March 22, 2006 08:32
<A href="http://www.audioholics.com/news/editorials/hospitalbirthingroomreview.php“><IMG style=”WIDTH: 85px; HEIGHT: 100px" alt= hspace=10 src="http://www.audioholics.com/news/editorials/opra-official-provider-of-related-advice/opras-first-review/image_mini“ align=left border=0></A>On the 17th of March, a day made famous by green beer and angry Irish men, an unfortunate event took place: OPRA's wife went into labor. Unfortunate only in that OPRA had big plans for the day that involved heavy drinking and a wife that was, by medical condition, the designated driver. Try as he might, he couldn't get her to agree that her ”pain“ was ”all in her head“ and that she should just ”suck it up" and drive him to the nearest bar. Thanking his wife for insisting that he bring the camera, he proceeded to test out the birthing room system in the hopes that others will do the same so that hospitals could be judged in the future not on the quality of their care, but on their ability to keep husbands entertained as their wives curse their names.