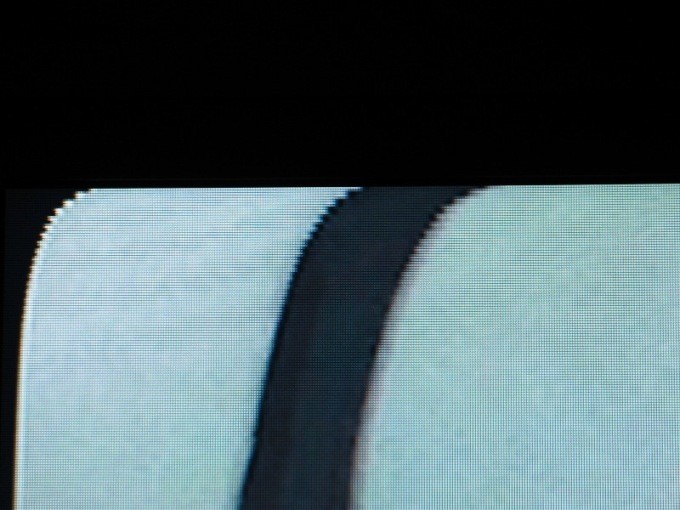 Back in October we reviewed the Syntax Olevia 542i LCD. While overall we gave the display a positive review, we noticed that with certain DVDs, the top of the picture would “tear” or be skewed to the right. Over Black Friday (the day after Thanksgiving) in some markets there were heavy discounts on this and other Olevia displays. Soon after we started receiving report after report of customers having the same problem. We have contacted Olevia about this multiple times but have still received no response. A fellow audioholic, Ken Phipps, sent us a detailed report. It seems that not only did he buy the set, but so did his brother. Between the two of them, they tested a number of different movies, DVD players, and input configurations. We are reprinting part of his report with his permission:

I believe from experimenting with different connections and settings that I've come up with the particular variables that trigger the problem.

Here is a list of the 4 DVD players I've tested:

As I stated in my earlier email, some DVDs trigger the problem while others don't. It appears from what I can see with the four players above to be mostly an issue when using the component connection. I don't have any players with HDMI connectors so I wasn't able to test that. I've seen this happening with a fairly wide range of DVDs (movies and TV shows). I have attached an image of the screen from the "Ice Age 2" DVD that shows the 'curve' problem. I've also seen this on the 'Ghost Hunters,' 'Curb Your Enthusiam' and 'South Park' DVDs.

This seems to be the consensus from the reports we have received. The tear exists. Depending on which player you have and what type of input you use the problem may or may not be fixed by switching the player to “progressive”. our tests we noticed that there were many more films that were experiencing the problem but that, since they were letterboxed (black bars on the top and bottom), the “problem” was hidden in the black bars. The tear issue seems to be confined to the component inputs as all reports have stated that switching to s-video or composite fixes the problem. We’ve also had reports of the same issue on the 537h so it doesn’t seem to be confined to the just the 542i model. While we suspect that Olevia’s unresponsiveness to this issue is due to the fact that it is sporadic in nature and only affects a small subset of owners. We have subsequently pulled our recommendation of this display and hope that future models will have this problem addressed.

Read the Complete Thread
Tom Andry posts on March 12, 2007 09:15
This isn't so much a fix as it is a workaround. Sure, setting the DVD player to progressive should fix the problem (it did for me but not for some readers). What Olevia is saying is “don't use our deinterlacers that you paid for, use the DVD player's.” Essentially, the display's deinterlacing processing is flawed to the point that it is unusable. This response from Olevia only confirms that their sets have a problem. If it is true that (with proper setup) setting your DVD player to progressive will fix the problem, then perhaps it isn't so bad. But for all those out there that spent $1k on a display but are using the free DVD player they got from their bank when they opened a checking account, well, they could have probably benefited from functioning deinterlacing in the display.
Buckeyefan 1 posts on March 08, 2007 18:28
Found the fix

I called Olevia and couldn't get through. I emailed them at tech support, and got a response within an hour! Here's what Ed said to do (it works):

This is not a glitch but just matter of proper setup; all DVD players
by
default are set to video output on S video.
The DVD player is not set correctly. You need to change the video
output
on the DVD Player to Component and not s video and also you need to
turn
on the progressive mode on. All of this is found in your DVD players
Setup. Once this is done your problem will be solve.

Please check our support page for any additional questions you may have
at: http://www.olevia.com/jsp/support/faqs.jsp

P.S.
When replying to this e-mail, please leave the original message so I
have history of all information given and received for your case.

Buckeyefan 1 posts on February 24, 2007 01:21
My 537H skews the picture to the right as well on dvd's fed through component cables. I have two dvd players hooked up to the 537H, and the one using composite does not have this issue. I thought it was the dvd player causing the issue, as digital cable (hooked up via component) does not have this problem.

Another issue I've noticed is that on some cable programs - especially children's shows, there is a “block” missing from the top left of the screen. It annoys me, but the kids and wife never notice it.

The last issue affects the sound. If you use the sets speakers for sound, and turn up the bass past 50%, there is excessive distortion. This comes through sounding like someone blowing over a microphone. As long as you keep the bass at 50% or less, it's not an issue. But, this set has a subwoofer out. If you hook up a powered subwoofer to the output on the LCD, and want to raise the bass via the tv, the distortion is extremely evident over a 50% setting.

I will say customer service is at the back of the pack as far as Olevia goes. They make a very good product at a very good price, but don't rely on any type of tech help. You are on your own with this set. I've overlooked the three issues above and chalked it up to “you get what you pay for” deal, knowing I'll never get someone to my house to fix these issues.

HD sports and digital signals are excellent, as well as the overall picture. For the price, I still think these sets are a bargain. They definitely need to do more R/D before putting so many sets on the market at rediculously low prices.

I did notify them of the bass distortion issue, and they never got back to me (no surprise). These sets, at the bargain pricing, should be purchased for secondary viewing or bedrooms. I've seen the “non-tuner” type 37“ models going for $599 at MacMall. The newer 437 models with tuners can be had for $699 locally. If you can overlook the few quirks listed above, it's still a great set. It's just too bad it's not a ”perfect" set at that price. No surprise there.

Chalk this one up to a company growing too fast and not having the resources to keep up with customer service or properly releasing products with adequate R&D.
ht_addict posts on February 23, 2007 19:38
I would suspect the no reponse attitude by Olevia is because the issue is too numerous, and can't be fixed. If it was sporadic in nature you would assume Olevia would fix the problem. Last year I bought a Prima PH-42T7, price was right and HD PQ was excellent. Little did I know that when you fed it a Progressive signal you would get a solid line tear across the screen. Depending on the resolution the tear would be in different spots on the screen. Communication with Prima was brutal and the issue never got solved, so I took the Plasma back and got a Samsung.
Buckeyefan 1 posts on October 28, 2006 18:13
A couple pet peeves I have with my 537H Olevia is the time it takes to switch from OTA HD to my 8300HD DVR. You've got to go through every input the LCD offers, and since the RG6 cable is hooked to the back of the set for OTA HD, my AVR is not in direct control of switching. So I'm fumbling between two remotes. One other issue is that ABC doesn't broadcast college football in wide screen, and the Olevia cannot scale the picture to fill the screen. So even though I watched the Buckeyes today in HD, it wasn't on a 37“ LCD. It was more like a 32” CRT. Aaargh. On the bright side, the picture was heavenly.
Post Reply