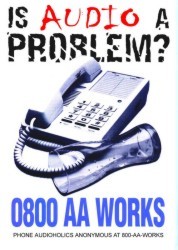 It was about time I attending my first meeting. Three interventions and an ultimatum from my wife finally convinced me to go. Held in a library (no loud noises allowed), the group was a hodgepodge of men and women, all nearly broke from spending every penny they have (and many they don't) on equipment upgrades. In this group, I discovered that not only was I not alone, I wasn't even the worst one.

I wandered outside just to be besieged by two of the long-time members. It was clear they were far from "cured" but they had stopped spending… as much. I remembered their names from the meeting. Bob was a short man wearing a noise canceling headset and a large hat, and therefore, spent a lot of time yelling. He was flanked by Sid, a tall, lanky man who apparently didn't mind Bob yelling at him all the time. I soon found out why.

Sid and Bob: WHAT?

Me: OK, THIS IS GETTING ANNOYING, BOB I GET, BUT WHAT'S YOUR DEAL?

Sid: Oh, I like to listen to things loud; you should really check out my system - it ROCKS!

Bob: IF YOU SAID YES, MINE IS FIRST. IT IS WAY BETTER THAN SID'S LAME SYSTEM.

Which quickly degenerated into a heated argument. Never one to pass up an opportunity to experience someone else's idea of sonic bliss, I jumped into my car and followed them to Bob's house. Bob's home, as he explained to me, was chosen specifically because it had a room with the proper room dimensions (1:1.4:1.9). It happened to be the only bedroom but Bob didn't seem to mind sleeping on a cot in the kitchen. The door to the adjoining bathroom was drywalled shut, and the frame of the main door to the room was lined with rubber to prevent vibrations. The room was treated with rigid fiberglass and membrane absorbers, diffusers, and bass traps but only at very odd locations. Inside the room were five of the hugest horn loaded speakers I'd ever seen. Nary a sub in sight.

Each of the speakers was placed equidistant in a circle configuration pointed at a purgatorial looking wooden chair in the center with an odd looking metal contraption where the headrest should be. Bob put his finger to his lips indicating quiet and took off his headset and hat. At once, I realized why he wore the hat. At four points around his head, he had surgically installed metal fittings. At first not understanding, I saw Bob sit in the seat and place his head in the metal contraption that connected to the metal fittings, locking his head in place.

Whispering, Bob commented, "This is the sweet spot. I've designed the room so that at this exact spot, a person can experience audio nirvana."

"Sorry," I whispered, "where's your gear?" Bob pointed to a shoebox next to the speaker directly in front of him. Approaching, I noticed that there were wires running from it. I opened it and saw five of the smallest little amplifiers connected to a 9 volt battery and an MP3 player. "What the…" I began.

Bob interrupted, "Yep, that's my whole rig," he whispered with a smile. "One watt amps and a modified MP3 player that oversamples each track so many times that it can only hold three songs. My copies are better than the original recordings. My speakers are so efficient that I could play this system 24/7 for a week before having to change the battery!"

Bob hit a button on his remote and the cacophony that escaped the speakers was completely without soundstage, imaging, or dimension. The room rang, vibrated, echoed, and just about everything else you could think of. I glanced at Bob and noticed the satisfied smile on his face. After a moment, he freed himself from the contraption and offered me his seat. Skeptical, I sat.

Honestly, it sounded pretty good, quite a bit better than my set up… though only in one spot. Bob was a good deal shorter than me, so I had to slouch down to get my head in the proper location. Once there, as long as I didn't move or breath or anything, it sounded great. If I turned my head or nodded, the soundstage was completely destroyed. Bob's smile increased as he saw me get into the right location, "See," he whispered, "it's perfect!"

It was at this point that Sid had had enough; he stormed in sending Bob diving for his noise canceling headphones. "Alright, let's go," he demanded, "time to experience a real system." Luckily, Sid didn't live too far away, but it wasn't exactly a good neighborhood. Well, it was more of an industrial complex. Sid had apparently converted the top floor of an old factory into an apartment. Inside, it was one big open room except for what looked to be a huge square vault in the center.

Square? I thought. After what Bob had explained to me about room dimensions and modes, I was confused why someone would build such a room. Giving him the benefit of the doubt, I watched as Sid hit a large button on the wall of the "listening room." A loud whoosh escaped as a large door began to retract from the wall on a boom that sat flush to the wall. An alarm sounded causing me to involuntarily duck from the expected air strike. The boom arm pulled the door out, and out and out. First about a foot of solid steel, followed by two feet of insulation, and finally acoustical foam in the shape of large pyramids with the apexes pointed into the room. Sid smiled from ear to ear, "Now that is what I call room treatment!" he exclaimed.

Sid motioned me in and I entered hesitantly. Inside, I felt like my ears needed to pop or as if I had balloons on either side of my head. The room was eerily quiet - my breathing seemed an affront to the unnatural silence. Five large bookshelves speakers were sitting on top two subs pointed generally toward a couch in center of the room.

Upon closer examination, the two subs turned out to be one sub and one VERY LARGE AMP. Once again, Sid smiled and explained, "Two channels each, 5000 watts per channel. The sub is a passive 17" ported design I came up with myself. This system will hit 142 dB at 3 Hz!"

Looking around, I queried, "Where is…oh yeah, WHERE IS YOUR EQUIPMENT?"

Bob pointed to a small black box with a red blinking light on it. Incredulous, I was going to take a closer look when Sid led me out. Once the door was sealed, Sid hit the only other button on the outside of the room. Suddenly the lights dimmed, the streetlights went out, and somewhere a sun died. After a moment, the room started to vibrate, the walls flexing in and out. I could feel the bass in my stomach and my ears started to ring. Next to my head, a fly exploded. Sid nudged me with his elbow, "That's LOUD, baby!"

"Hey man, that's 5000 watts all channels driven! You can't get that anywhere else. I paid for all those watts, damn if I'm not going to use them."

"Oh, that's just a sine wave. It is the only way to use the amps and the speakers to their full potential."

Bob and Sid sure were nice. I'm not sure they have fully optimized their systems yet, but it seems to work for them. For me, I'm thinking I need to spend less time at Audioholics Anonymous meetings and more time with the wife and kids. Those guys are crazy!