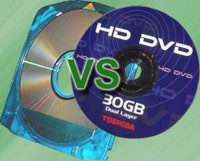 Angst. A feeling of anxiety that may or may not be accompanied by depression. We've all felt it at one time or another. Many of us during our formative years… high school, early college, day after our wedding. The funny thing about angst is that it likes to be shared with others. Sort of like misery but more forceful. Misery is such a pathetic little emotion, always running around hoping that others will share in it. Angst says, "You will feel like me or else!"

Many of you are feeling angst, or you soon will, over the new high definition DVD format. Why? Is it because two people just so happened to come up with competing formats at the exact same time? Don't believe it for a second. As soon as DVD's came out, they were working on the next big thing. They've had it in the planning stages for years but weren't going to screw up the good thing… the cash cow that is DVDs. Come on, $20 for a DVD? They cost like 15 cents to create. You know it, I know it, and they know it and know that we know it. As long as we keep paying, why should they change? Plus, now all they have to do is reclaim a fraction of the movie's cost in the theater. They know they can make the rest up on the DVD release.

I'll give you a reason: While inertia is the booty call of formats, displays are in a never ending game of king of the hill. You've got a 27", I'm getting a 36". You get a flat screen LCD, I'm getting a plasma. You have 720p, I'm getting 1080p. Wait, there is no content much less a player that will output 1080p. So what? I've got one and you don't. So Joe Consumer has finally bought a product that truly is a valid contender for a luxury tax - completely without real world application. It is akin to buying a Lamborghini in Key West - you know the speed limit doesn't go over 35 on the whole island - and even if it did, you'd be the only one trying to hit it.

The big manufacturers looked over the globe, saw the never ending fields of DVD players - at least one in nearly every home in America - and smiled, pleased with what they had wrought. They took a collective breath and said, "Alright, it's all got to go." Why? Were they not making enough money? No, they had a build up of angst and just felt the need to share. So, where does that leave us? We have displays that we can't use, players we can't buy, and a format (DVD) that can't store enough information to make use of the capabilities of the displays. So do the big manufacturers get together and work something out? Something for the good of all? No. They divide into two camps each backing their own format. Blu-ray and HD-DVD. Great! Format wars are so wonderful. Have we learned nothing from the Betamax / VHS debacle? Experts agree that Beta was the better format, so it won, right? The good guy always wins in the end, right? Yeah, and if the world were fair, peace would cover the globe, charitable donations would actually go to the cause for which they were intended and not for buying Lamborghinis for the administrators that live in Key West, and cube satellite systems with "bass" modules would be outlawed.

So, who will be the winner of the format wars? Will it be the manufacturers? Not really. Some of them will waste millions backing the wrong horse, others will get left behind as they wait to see who wins, and the winning format backers will have gone nearly bankrupt ensuring their victory. Will the consumer win? Early adopters will deal with glitches, bugs, hardware and software issues, and God knows what else - and that is only if they pick the right format. Heaven help you if you pick the wrong one. You'll have an easier time getting movies for your PSP. The "wait and see" crowd will spend months if not years waiting to see what the outcome will be. Sure, there are those of use that will wait anyways because the idea of spending 1k for a player that will be outclassed in a year by a player half the price is anathema.

No, the real winners will be the movie studios. Suddenly, they have a whole new format to release the theatrical version, the extended version, the super extended Alan Smithee version, the uncut raw footage platinum version, and the budget full screen version for the Walmart crowd of every movie known to man. And we'll buy them. Not to mention that, while people will resist additional protections and anti-piracy doodads added on to a format they are familiar with, they are much less likely to balk when a new technology incorporates all sorts of Machiavellian subroutines and Lord knows what else. We'll all be too interested in seeing what this new format can do to worry that you have to provide a thumbprint every time you want to play a disc. It won't make sense that our new player has to be plugged into the phone line in order to work or that there is a huge sticker on it that says playing pirated movies could result in permanent harm befalling your player, speakers, and dog. We'll just stick a disc in and enjoy the completely new, immersive, and remarkably similar HT experience we had before. Oh, it will be better, sure. But was installing a chip in your arm really worth it? Well, I'd do it but that's just me.

When you wake up at night in a cold sweat because you just bought an HD DVD player when the Playstation 3 launch is just around the corner, don't blame yourself. Don't even blame Sony or Toshiba or any of their cronies. Look to the minions of the Anti-Christ that pull the strings behind all those corporations. The ones that got Sony to install a virus on your computer in an effort to curtail piracy. The ones that are blocking every attempt for you to get content via the Internet because it can't be regulated by them. The ones that think that DVD's are way under priced. Because they are the same people that think a bar code tattooed on every person is not only a good idea, but a necessity. Because if the money doesn't keep rolling in for them, how are they ever going to pay their lobbyists to get an autobahn installed in Key West?