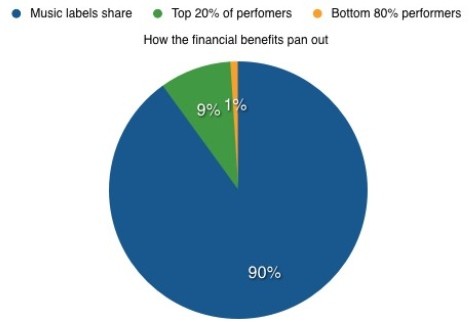 See, its all for the musicians.

With compact disc sales tanking year over year and recording artist long abused by the system becoming independent via the Internet, the recording industry is in a world wide frenzy to grab whatever source of cash they can.  Looking to get the kind of copyright extension that they enjoy in the States, courtesy of Sonny Bono and Mickey Mouse, the recording industry has recently convinced the European Commission (EC) that an additional 45 years of copyright are just what poor, aging musicians need to make it through their Golden Years.

Responding to a request for comments on the EU copyright proposal from the UK Intellectual Property Office (UKIPO), the UK based Open Rights Group (ORG) has taken a bit harder look at music industry claims about who actually benefits from copyright than the EC.

Ars Technica: 80% of artists would get <€30/year from copyright extension

Open Rights Group: Performers likely to get as little as 50¢ a year from increased term of copyright

The recording industry, in an effort to convince the EC that more copyright is better, played the standard trick of trotting out old musicians to speak about the hardships they face without perpetually being paid for work they did in the past.  Apparently, it worked, and the EC has recommended the 45 year extension of copyright from the current 50 years to the European Parliament for consideration.

Other groups, such as the Gowers Review of Intellectual Property in a report to Her Majesty’s Treasury, Centre for Intellectual Property Policy & Management Bournemouth University, and now the Open Rights Group, have come to the same conclusion that the proposed copyright extension is a bad idea that is unsupported by facts.

The Open Rights Group dug into recording industry claim about the necessity of the copyright extension to pay performers and what did they find?

90% of the additional revenue will go to the record labels

9% will go to the top 20% of successful musicians

1% will go to the remaining 80% of performers

This lopsided distribution of payment is also supported  by Creativity stifled? A Joint Academic Statement on the Proposed Copyright Term Extension for Sound Recordings presented to the EC and signed by a very extensive list intellectual property researchers at Bournemouth University in 2008 that strongly opposes the copyright extension:

It is indeed hard to see how extending exclusive rights over the catalogue of recorded music for another 45 years would benefit society. Following years of fierce and sustained lobbying by the trade bodies of the record industry, however, the copyright unit of the InternalMarket Directorate has drafted the text of an extension directive which the European Commission has adopted on July 16, against the reported objections of commissioners Viviane Reding (information society) and Vice-President Antonio Tajani (transport).

We find that artists’ earnings are primarily a matter of contract, not copyright. Advances and royalties for record sales depend on the terms of the recording contract. Empirical studies consistently show that only a small percentage of artists are able to control their contracts. According to collecting society statistics, the top 10 per cent of artists account for between 80 and 90 per cent of total earnings.

The ORG report to the UKIPO certainly details some interesting economic consequences to the copyright extension proposal, but none of them seem likely to help out the majority poor aging rockers much, burdened with with a 90% overhead to the record labels:

IP policy should be guided by reason and an equal concern for the interests of all UK and European citizens. The Commission makes much of the challenging financial situation facing ageing performers. While we do not accept that IP law is an appropriate mechanism to deal with this situation, as we will demonstrate in the second section of this submission, it also turns out to be a very inefficient one.

According to ORG, the majority of the supposed beneficiaries of the copyright extension will receive as little as €0.50 to a maximum of €26.79 in additional income per year, depending on inclusion of the musicians fund, when considered on average.

As we demonstrate in the table overleaf, the projected financial gains for the vast majority of performers are meagre: from as little as 50¢ p.a. (low estimate, no fund) in the first ten years, to as "much" as €26.79 p.a. (high estimate, with fund).

Meanwhile, the minority of beneficiaries, those running record labels, will net millions of additional Euros per year.

So where do all those millions Euros come from?  Consumers of course.

The record industry was offered a generous commercial bargain when investing in recorded music under the current exclusive term of 50 years. This already far exceeds the protection available to other research and development intensive industries. It cannot be the job of the European Commission to protect the revenues of incumbent companies at the cost of consumers, creativity and innovation.

With results such as these, it is unsurprising both the ORG report and other reports wonder aloud about how strongly the EC recommendations were swayed by lobbying interests rather than facts. The various statements against copyright extension go on to suggest several other mechanism that would be more effective in ensuring that musician enjoy financial security into their golden years. Perhaps the EC should consider prevailing recording industry contract terms regarding compensation or perhaps review the effectiveness of current retirement and social insurance laws.

Improving the situation for performers might be more sensibly tackled if legislators scrutinised the situation of contractual terms between performers and producers, rather than extending term for the overall benefit of very few. Effective retirement and social insurance schemes are also more appropriate areas for scrutiny.

If the European Commission wishes to support European artists, there are many possible measures that would not result in monopolising the back catalogue of recorded music for another 45 years. At the level of Member States, policies include (i) the regulation of copyright contracts, and (ii) social security and insurance schemes; at the European level, policies include (i) equitable remuneration rights only available to living performers, and (ii) the regulation of collecting societies and licence tariffs, such as the nature and distribution of income from any copyright levy scheme.

Considering that the standard for recording contracts is an an extremely lopsided deal in favor of the record labels, it would seem a very logical and much better place to actually help poverty-stricken musicians.

Contract terms typically involve a pittance royalty to recording artists at often less than a dollar per record sold, and that would be gross. Every other expense that the record label incurs comes off the top of the royalty. This starts with any cash advance to the musicians for recording costs is recouped before any royalty payment is made. Producers and all production costs also are paid out of royalties. Next comes any money that the label spent promoting the record, including free marketing copies and payola to radio stations, promotional touring costs, and any other schmoozing the label engages in. There is also a packaging charge against royalties for every manufactured copy, which comes in at 15-30% of the gross royalty payment.

After all of these charges are made against royalty payments, it is not uncommon for artist to end up owing the labels unless there is significant number of retail album sales.  Under terms such as these, it should be easy to see that only the most successful musicians have any hope of making money from royalties. Then on top all of this, it is standard practice for the recording copyright to be forfeited by the musicians to the record label, effectively treating musicians under work for hire terms.

What happens is that effectively, the musician pays for absolutely every facet of recording production, promotion, manufacturing, and distribution of a record and the record label somehow owns the copyright.

Under these conditions, it should be quite obvious, to anyone familiar with the situation at hand, who benefits most from copyright. After all, it is not the poor starving artists who own any recording copyrights; it is the recording labels.

Creativity and cultural development, both artistic and scientific, have always depended upon the work of those who came before. Our very advancement as a species is wholly dependent on our ability to communicate what we know and have learned so that it can be built upon by subsequent generations; otherwise, we would be perpetually stuck reinventing the wheel at each generation.

If nature has made any one thing less susceptible than all others of exclusive property, it is the action of the thinking power called an idea, which an individual may exclusively possess as long as he keeps it to himself; but the moment it is divulged, it forces itself into the possession of everyone, and the receiver cannot dispossess himself of it. Its peculiar character, too, is that no one possesses the less, because every other possess the whole of it. He who receives an idea from me, receives instruction himself without lessening mine; as he who lites his taper at mine, receives light without darkening me. That ideas should freely spread from one to another over the globe, for the moral and mutual instruction of man, and improvement of his condition, seems to have been peculiarly and benevolently designed by nature, when she made them, like fire, expansible over all space, without lessening their density at any point, and like the air in which we breathe, move, and have our physical being, incapable of confinement, or exclusive appropriation. Inventions then cannot, in nature be a subject of property. Society may give an exclusive right to the profits arising from them, as an encouragement to men to pursue ideas which may produce utility, but this may or may not be done, according to the will and convenience of the society, without claim or complaint from anybody.

Our Founding Fathers had great reservation about including the basis for copyright and patents in the Constitution. They were concerned about the harms to society for granting such a monopoly of thought to the creators through the government that represents the society. Here, with the recording industry, we have a condition where those who hold copyright but had no hand in the creativity are seeking near perpetual monopoly to be borne on the back of society with no trade-off to the public domain so that the costs of allowing the monopoly can eventually benefit the development of society.

So really, it should be no surprise that 45 years of additional copyright protection brings significant benefits to the recording labels, negligible benefit to musicians, and outright harm to the public and the public domain.

Read the Complete Thread
fredk posts on September 26, 2008 22:20
The industry pretty much deserves to die. Too bad they will take down the creative talent with them.

By the way, does this sound familiar? Who do you suppose is going to benefit the most from the banking bailout?
Post Reply