DVD Burning Kiosks a Thing of the Past 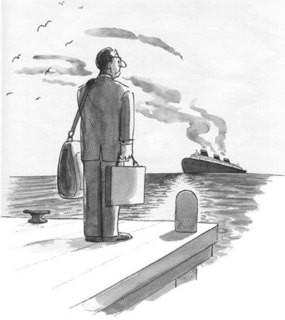 Once again the studios have missed the boat

When Reuters put out a story this weekend that Walgreens were going to start providing DVD burning kiosks in their stores, my reaction wasn't, "Wow that's cool!" as much as it was, "Um… why haven't they done this sooner?" With the release of the high def formats (however successful they may ultimately end up being) now taking up the majority of the headlines, it does seem a little late in the game to be pushing something that should have been available years ago.

Think about it, how many stores can really carry a good selection of movies? How many have the storage to carry anything but the latest releases and a selection of kids' classics? That's all you'll find at Wal-Mart or Target (two of the biggest DVD retailers) and you'll be lucky to find that. But just about any store (including Mom and Pop shops) could afford to rent (or buy for the big guys) a computer with a few terabytes of storage, a connection to the Internet, a DVD burner, and a printer. People could select their movie, pay for it at the kiosk, and continue their shopping while their disc is burned.

This isn't exactly a new idea. In fact, it was old when Wal-Mart looked into it in 2005. The problem will be two-fold. First, studios are neurotic when it comes to releasing any sort of control and putting out hardware that can burn their movies represents a loss of that control. Secondly, and more importantly, will be the cost. For some reason, mass producing DVDs is seen as more cost effective then burning them on demand. This may be true on the raw materials side but I just don't see how that can be so when you consider the costs of storing and shipping that many discs. That's a lot of warehouse and truck space. That’s a lot of middle-men. Remember digital prints were/are held up in theaters because the studios wanted the THEATERS to pay for the hardware upgrades and STILL wanted to charge them the same amount for prints, even though they eliminate all that shipping, overhead, etc. You can bet the same goes here. Wal-Mart won't make any more money and their cost will be the same - either that or they finally managed to get some leverage during this HD fiasco.

Unfortunately, if this finally does come to fruition, don't expect to use it. They'll probably only offer obscure movies and they'll be priced higher than new releases. They'll more than likely skimp on the printer and use some sort of ink cartridge instead of laser and the discs will look cheesy. Well, at least all those audiophiles that believe that a burned disc sounds better than a stamped disc will have something else overpriced to spend their money on.

The fact is that DVDs, HD DVDs, and Blu-ray discs are a digital medium. There is no reason why we need to have hundreds of thousands of physical copies sitting on store shelves. There are burners for all those media out there now and we should be able to go to each studios website (or a licensed third party) and download and burn a copy of the newest (and oldest) movies at our leisure. Scouring the Internet for the Criterion version of The Seven Samurais is just stupid. If done correctly, downloadable/burnable movies should have REPLACED physical discs in stores over a decade ago. People should be arguing over (in forums) which store has the fastest, best, and/or most burners... There should be no reason to stock ANY inventory.

And here's a little wake up call movie studios - PEOPLE ARE GOING TO PIRATE YOUR MOVIES. You know it, we know it, and there is nothing you or I can do about it. But when you put limitations on our access to your movies the only people you are hurting are the paying customers. The pirates and thieves will do what they do regardless of the measures you take. Your programmers and security people work 8-10 hours a day and presumably have a life. These hackers do nothing all day long but think of ways to hack the latest piece of software. You can't stop them from doing it; you can only get them afterwards.

Giving the rest of us access to your movies for download, no matter what weird hoops you make us jump through in order to do so, will only pay off for you in the long run. Lower production costs, more sales of older movies that no one stocks anymore, and overall greater profit. All that in a package that is perceived to be more cost effective to the consumer because they are not having to pay for the gas the trucks used, the cost of the warehousing, and all the other middle-men add-ons between your studio and our home.

Should there still be new releases printed and shipped out to stores? Sure, but in limited runs and at a price point that is higher than the downloadable version. See, now they are collectable! But by the time the studios actually figure this out I'll be writing an editorial about whether we should have to listen and watch movies or be allowed to download them directly into our brain.

Discuss This Article
TRosenbaum posts on November 01, 2007 12:03
Boys..good news..its happeneing. DVD on Demand at retail is the next wave. From TV Series compiliations to feature films and it will be much greater of a selction than most expect, the “Long Tail” is boring and thats what the interenet surfer will look for.
You will see Just aired TV to New Release featuresa as well as TV never released to DVD from all genres. The process has improved to 4 to 6 minute burns and will cater to more retail niche verticals well beyond the BIG 3 that sell most of the videos. Just trhink about getting instructional and educational videos at the retal enviroment like hardware, kitchen and bath, office, sporting goods, etc..instead of waiting to go home and find it on the inernet..The limitations from the home and confusion between medias and its standards will continue to support the majority consumer looking to buy DVDs and watch them on their TV no matter the optical disc format HD or SD.
We have over 10,000 titles licensed at Polar fRog Digital for DVD on Demand and will continue tose efforts place solution in retail enviroments taht can monetize the niche content and satisfy the consumer that took the time to leave the home.
Stay Tuned!
Joe Schmoe posts on November 01, 2007 11:57
I wasn't aware that burning movies had any advantages beyond being able to stay home while doing it. If you are going to go to a store anyhow, why not just buy the prerecorded DVD instead?
smurphy522 posts on November 01, 2007 08:21
Well it was an interesting article and good coverage/opinion of it by Tom (as usual). I am not sure what kleinwl's point is about too dificult to burn and such. If this was adopted by the studios it would only work if the likes of Apple, MS, Roxio, Nero and others came up with easier to use 1-2 click burning methods. I have no doubt that if it was available to the mainstream burning would be developed into an easy to use method and would garner much praise. I can remember back in 1993 how difficult it was to “surf the net”, mainly because there was little to actually surf but also beczuse it was painstakingly slow. I guess kleinwl can't argue that the web has become easier and cought on somewhat by now.
How many years did it take for Blockbuster to carry just DVDs; phasing out VHS tapes? Technology is slow to be adopted by the norm especially when there is a want (but no real need) to keep a contolling-choke hold on it.

“high” speed broadband has very low penitration in the market… and honestly, most people are too ignorant to know how to burn their own DVD… or even just copy it to their hard drive and play it on their TV.

So… downloadable is a non-starter for most of the market… in fact it is a waste of time, since it will be such a niche market.

Now… DVD burners SOUND good… but this is a “impulse” buy… who wants to wait 10minutes (or longer) while your DVD is burned… or worse…wait in a queue for someone who bought every episode of the black addler. Nah… not going to happen either… waste of time…
kens posts on October 31, 2007 18:08
Whole heartedly agree! We don't need no stinkin' format war, just let us download the content. The music industry is just figuring out that the major labels can actually sell direct to the consumer bypassing all the middlemen (though they will probably sell for more than itunes). If they would for once just think in terms of satisfying their end customers. Sorry, I forgot myself, that is way too much to ask of them.
Post Reply
About the author: