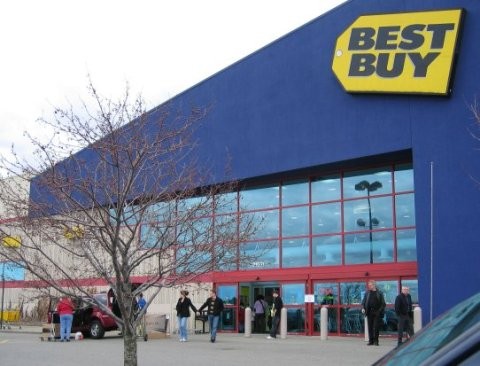 Imitation is the best form of flattery they say, so I suppose the now defunct Circuit City should be flattered. While it was only two years ago we were reporting on Circuit City cutting jobs and hiring lower paid staff, it seems the last big boy on the block is doing the same. Maybe someone should send a memo to the big wigs at Best Buy that Circuit City's policy pretty much killed them.

CEPro is reporting that their sources have uncovered a similar plan by Best Buy. Currently they are lowering the salaries of their highest paid workers (specifically those with "Pro" on the name tag or those that work in their Magnolia departments) from $18 an hour to closer to $12. Of course, they are saying that they will be offered other positions but you can bet they won't be offered similar pay. Those positions will be just as low paying as the one they'll be leaving. If you can't make a living at your old position with the new pay, how will a title change really make any difference?

Best Buy acquired Magnolia back in 2000 with the commitment to turn it into its own national chain. That slowly changed as Magnolia stores were opened then closed with Magnolia mini-stores being placed inside of Best Buys. Now, we may be seeing the death of the Magnolia employee and with that death, a trend toward lower waged and inexperienced personnel.

This is obviously a function of the economy where consumable income is being diverted more and more to necessities. But one must question the logic of following such a failed model. Circuit City's cuts were much deeper (seemingly, we don't exactly know how deep the Best Buy knife is cutting yet) and much more abrupt - they cut the people and then offered to hire them back at a reduced salary. Best Buy seems to be taking the Office Space approach and just "letting it work out" on its own. They reduce people's pay and they put up their hands claiming it isn't their fault that they don't have any experienced people any more.

Best Buy needs to remember that when Circuit City made their 3500 person cut, they were the number 2 electronics retailer in the US. If they think they will be immune to the ultimate fate that has befallen Circuit City and Tweeter, they are sadly mistaken. One thing they need to do is look in their rear view mirror.

Currently, BJ's Wholesales Club (a Costco/Sam's Club type store) is now offering installation services of big screen TVs. This is unprecedented on a number of levels. First, it is a wholesale club that is offering service - something that usually comes in the form of jumping out of the way before they run you over with their forklift. Second, it may signify a move away from the last of the Big Box stores and toward the wholesale arena. If Best Buy isn't offering any service that you can't get at a wholesale club, then what's the point of going? Before, you could at least count of talking to a "knowledgeable" staff member at Circuit City or Best Buy. But once they are gone, what has Best Buy got on the wholesale stores? Installation services. Once that's gone there is practically no reason to go there other than typically a larger selection of products.

On the other hand, the Wharton School surmised that the fall of Tweeter was based on an overemphasis of service over price. Best Buy, they said, "should avoid the temptation to cut prices at the expense of quality sales and service" or essentially risk turning into a Walmart. Walmart already has the edge in price, what they don't have is knowledgeable service staff. If the knowledgeable Best Buy staff leave because of the lower wages, what is the draw for the average consumer that is looking for help in making a substantial purchase? Why would they buy from a high school kid in a Best Buy blue polo when they can buy from a high school kid in a Walmart blue polo? Especially when you consider they are already at Walmart for just about every other purchase, this thinning of the knowledgeable Best Buy staff looks to be a huge misstep in strategy.

So what can we expect in the news from Best Buy. Well, if we go by the Circuit City model we'll see lower morale leading to slow sales. Slow sales will lead to lower profits which will lead to the circling of sharks. Someone may make a big for the former Big Box giant or not - but at least there will be talk of it. You can expect more than likely at least one possibly more stepping down of CEOs. Eventually, if someone doesn't scoop up the brand for pennies on the dollar and turn them around, you'll hear about massive store closings and layoff which will be greeted by rumors (hotly denied) of impending bankruptcy. A few months later (after a sluggish holiday season) and those rumors will be confirmed.

And what will we be left with? Wholesale stores or Walmart. Now there's a depressing thought.

sawzalot, post: 553412
I second that here in Jersey we have Best Buy and thats it !!! We need some competitors to give us some choices,something,anything.

6th Avenue
davidtwotrees posts on July 28, 2009 08:30
I don't spend much time in B & M stores………but as for expecting near minimum wage people to have polish and expertise?! I feel is a bit naive don't you think? If one can't make a living doing something, then people won't choose that job as a profession. To me, a professional sales person is someone that knows their product through and through.They can compare and contrast various products that they sell. They should have knowledge of literature that comes with products, and be willing to share that knowledge with prospective buyers. In a HT setting, I would expect the person to be able to demonstrate all or most of the gear for sale in the store. Of course, all this knowledge comes at a cost. Appearantly corporate america has deemed that two $10 per hour people are more profitable than one $20 per hour person.
I guess that's where the term “living wage” comes in to play. If one can't make a living doing a job, what motivation is there to do the job properly?
chuckdaly posts on July 27, 2009 10:07
To be fair, when Magnolia Home Theater launched, the sale people were given training by the manufacturers, such as Vienna Acoustics, Martin Logan, Universal Remote Control, etc. Of the stores I worked in (3 different stores in New England) none of the trained employees currently work for Best Buy. So I stand behind by my assertion that Best Buy employees have no training. Heck they aren't even trained in salesmanship, nevertheless audio video technology.

The general public needs knowledgable sales people to help them buy the products they need. The internet is a great resource of information, but the vast majority of consumers can't discern the facts from the myths. Just look at HDTV forums and read all of the posts about Plasma Burn-in, or how people take AV receiver power ratings at face value.
skizzerflake posts on July 26, 2009 23:18

chuckdaly, post: 601969
I worked at Best Buy for 1 year in the Magnolia department and zero training was offered. So all the seasonal employees were selling AV gear with whatever knowledge they came in with, which was typically nothing. The scariest thing was that none of the magnolia guys had even been to a High end A/V retailer, even though one was just miles away. They either couldn't be bothered or were afraid. How can one emulate something they have never experienced?….

I've noticed that, both in Magnolia and the rest of the store. BB gives the impression of investing very little in their employees. From my experience, the training must consist of “keep them talking and act like you know something”. It's unfortunate because I've heard naive customers putting a lot of weight on advice from somebody who was seriously off course. I don't blame the workers that much because I know you have to do what you have to do, but for customers that expect expert advice, it can be a rude awakening.
chuckdaly posts on July 26, 2009 23:06
I worked at Best Buy for 1 year in the Magnolia department and zero training was offered. So all the seasonal employees were selling AV gear with whatever knowledge they came in with, which was typically nothing. The scariest thing was that none of the magnolia guys had even been to a High end A/V retailer, even though one was just miles away. They either couldn't be bothered or were afraid. How can one emulate something they have never experienced?

I predicted 2 years ago that Walmart would “Circuit City” Best Buy within 5 years. I still stand behind that. Best Buy created a price war with CC and won. The only retailer that can win a price war with Walmart is Ikea. Best Buy has to sell upscale and promote the value of better products rather than cheaper products. Magnolia HT started selling Denon, Pioneer Elite, and Primare electronics, now they've added Yamaha and Sony, but removed Primare. Magnolia ceases to differentiate itself from the rest of Best Buy product wise. The only products that Best Buy sells that Walmart can't get are Vienna Acoustics due to Sumiko's strong belief in limited distribution.
Post Reply