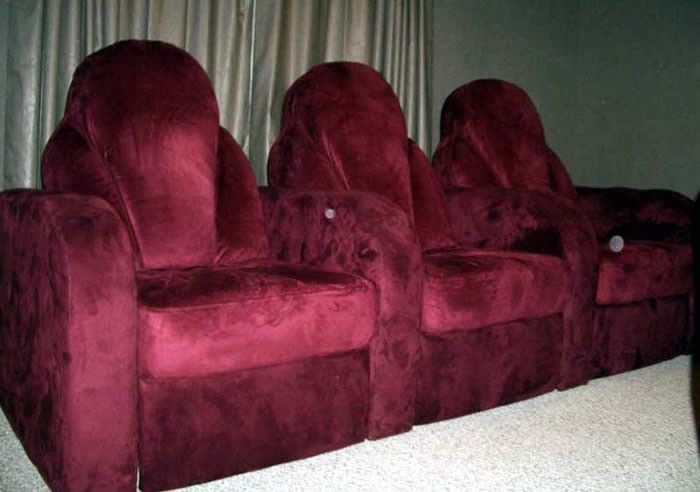 As a home theater enthusiast, there can be nothing more exciting than planning out your theater room.  It’s more than just a place to indulge in sonic and visual bliss.   It’s a sanctuary - a place to escape the real world, at least temporarily. You’ve got your whole dream theater planned out.  You know exactly what gear you want to use, where it will be located, the wiring, etc. But what about the most important part of the theater?  The one that is almost always forgotten, or put on the sidelines during your planning - the chairs.  After all, if you aren’t comfortable while sitting, what good is it?  After experiencing the awesome comfort of Continental Seating theater chairs, my advice to prospective theater builders is DON’T forget to allow sufficient budget for quality seating.

Most medium-sized theater rooms require at least two rows of seating.  But the problem with a second row is it can be visually blocked from the display screen by the front row if it isn’t properly elevated.  Because of this, it’s essential to place the second row of seats on a slightly elevated plane from the first row.  Unless your room is already constructed in such a fashion, you will need to build a riser platform.   But why limit the functionality of your riser to simple chair elevation?  I say kill two birds with one stone and make it an integral part of the theater experience.

Auralex to the Rescue

I wanted my riser to not only elevate my seats, but to help smooth out bass response and increase tactile response for all of the seats residing on it.  With that in mind, I called our friends at Auralex - our official acoustics sponsor of the primary theater room in the Audioholics Showcase home.

They provided me a basic design for a riser that would serve the following functionality:

Auralex prepared a basic design sketch for me to follow and it was up to me now to determine how big I needed to make this riser. The above diagram shows the basic structural layout and design.  Notice the front ports which I actually doubled up on (more on this later) and the Auralex U-boats which are used to mechanically isolate the riser from the rest of the flooring.

In order to accommodate the width (95”) and depth (61” reclined) of my 3 theater chairs, I needed to make the riser about 105” wide to have 5” of margin on each side (we don’t want people falling off their chairs).  I decided on making the riser 7’ deep to allow plenty of leg room up front.  I allowed for about 3’ of space between the back of the front row and the front of the second row (this is especially important when folks in the front row are reclined) with sufficient rear space so that the listener isn’t placed directly against the back wall when reclined.

It’s important to consider the placement of the riser before construction, or you will be in for a world of hurt if you later decide to move it.  Placement is strictly a function of where the best location of your seating area is in relation to the soundfield.  Since I am using RBH Sound 66-SE/R dipole/bipole side channels with RBH Sound SI-740SI/R direct radiator back channels, I had to choose seating locations for the two rows of seats that would work best with this speaker topology and placement.  I decided to place the front row about 2’ in front of the 66-SE/Rs and the back row 2’ behind the 66-SE/Rs.  Ideally you don’t want to seat the listener behind the null of dipole type speakers, but the RBH’ speakers work better than most in this regard since only the tweeters are wired out of phase.  Coupled with the direct radiating rear SI-740SI/Rs, it filled out the surround field nicely, causing the second row to actually become my favorite row to listen to multi-channel music or movies.

In discussing the riser design with Auralex, I took some notes as to how to best maximize its design effectiveness:

Editorial Note On Riser Height by Jeff Szymanski
It is more natural for people to step up 6” to 7” as opposed to the 9” created by 2x8s and covering carpet.  Acoustically, more volume is better.  But we all know how ergonomics win out sometimes.  For more information on the design of stairs and risers, see Small Things Considered: Why there is no perfect design” by Henry Petroski, Chapter 18, “Design Rising”.

The riser is partitioned into individual cavities via 2 x 8 beams separated 16” on center.  Each of the 2 x 8s form quasi internal bulkheads, partitioning the internal volume of the riser into individual, semi sealed chambers. Each chamber is 75% filled with Auralex Mineral Fiber leaving a 25% air gap between fiber material and riser flooring.   Each chamber is tuned by its respective pair of 1 1/2” ducts functioning as a Helmholtz resonator. Based on the individual size of the chambers, they act as narrow band absorbers in the lower frequency range (below 30Hz) but aren’t 100% effective at this task since each chamber isn’t completely sealed off from each other.  The U-Boats leave about a 1” air gap between chambers. It was necessary to decouple the riser from the floor using the U-boats to increase tactile response.  I felt the trade off of better tactile response vs. more effective broadband absorption in the 20-30Hz range was a good compromise especially since I was using multiple subs with active Audyssey equalization to smooth out bass response in all listening seats.

Editorial Note on Riser Bandwidth by Jeff Szymanski
The “loose” coupling between the chambers, combined with the absorptive fill makes the riser more wideband.  Think of a cola bottle.  Blow over the opening and you hear a tone.  A whole collection of similar bottles will absorb a significant amount of sound at a narrow band around that frequency.  If you loosely fill the bottles with “fuzz,” the center frequency stays more or less the same, but the overall absorption decreases and the frequency range increases.

An illustration of this behavior can be found in Jeff Cooper’s book, Building a Recording  Studio.  See Figure 4-7.