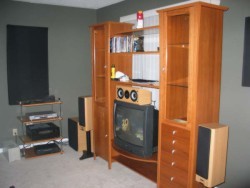 I don't profess to be an acoustical engineer or some sort of sound guru. I'm a normal guy, married with a kid, who has recently purchased my first house. I've been an audio nut for years with very little money to invest. My poor wife has been listening to me over the dinner table talk about this speaker or that receiver. I've picked out systems for friends and family all the while listening to a mishmash of different speakers (timber matching, what's that?) with an old analog Onkyo receiver. My wife (if she had her way) would almost never turn the TV on and when she did it would be either the news or the weather channel (with the occasional American Idol and 24 thrown in). However, out of love for me and the promise that the TV would not be visible from the dinner table, she agreed to allow me to purchase all new equipment (except for a TV, still working on that one) and gave up a whole room.

So, now I have a home theater room (I've been informed that it is not an actual home theater because it's open to other parts of the house). It's not the best laid out room for home theater, but it is all mine to do with as I will (within reason of course). The biggest problem is that it is small (14.5' by 12.5' by 8') so there is little room for natural absorbers, diffusers and other such furniture. The room will have only the HT equipment and seating, so I knew two things right away:

Now, it bears repeating: I've just purchased my first house. Which means I've been living in apartments. Which means I've never had a garage (or work room, etc.). Which means that I own almost no tools. I think you're getting the picture. Not exactly handy around the house. But hey, I've got a college degree, how hard can this be?

A short caveat. My father IS handy around the house. He has many tools. I think (debatable) I was there when he worked on things, but I don't think I paid much attention and I probably killed the brain cells that stored such information in college (hey, I didn't think I'd need that knowledge at the time) so consider me a blank slate.

There are two basic types of room treatments, absorbers and diffusers. Absorbers absorb sound and diffusers spread sound that would normally bounce in a single direction into many directions (for much more information see here). While I may decide to build diffusers in the future, this article addresses my room's desperate need for absorption. As anyone who has done any research into home theater room treatments knows, absorbers are usually made out of some sort of acoustical foam (like the stuff you see in recording studios or anechoic chambers, looks like egg cartons) or rigid fiberglass board (Owens-Corning 700 series or similar type). The problem with the acoustical foam is that it's ugly, comes in weird shapes, is ugly, is usually only available a handful of colors, is ugly, and is not as effective (per square inch) as fiberglass absorbers. The problem with the fiberglass absorbers is that, if you buy them pre-made, they are expensive (easily $1000 and up to treat a room of my size), and if you make them yourself, it's hard to find someone to sell you the fiberglass (they don't carry it at Home Depot or Lowe's though I heard you can get them to order it for you, but they charge you an arm and a leg), and you will have to build something to house them (fiberglass fibers floating around your house would probably have a low WAF).

In the end, I decided that the best bet would be to build some rigid fiberglass absorbers. Enter everyone's best friend: Google. After a number of days of searching I found a couple of useful sites that helped me on my way to building my DIY absorbers (see links at the end of this article). I found a thread that indicated that a company named SPI would sell the fiberglass to joe public at a reasonable rate. I also discovered that they had a location about 2 miles from my work (yippy!) so after some discussion (read: begging, pleading, and pointing out the cost of professional absorbers) with my wife, I picked up a box of six sheets of 2" thick rigid fiberglass board with facing.

When purchasing fiberglass, you may (or may not) have a choice between faced or unfaced. Faced means that on one side of the fiberglass is some sort of material that I can only assume has some value for the fiberglass's actual application. From the perspective of creating absorbers, you only need to know that keeping the facing on will reflect high frequencies. I would suggest purchasing faced as it can always be removed depending on your needs.

Two things should be noted: 1) before I started this process I didn't even know what rigid fiberglass board was! Bpape and Ethan Winer filled me in and gave me some great advice on a thread I started here . I also would like to give special thanks to Ethan Winer because he owns a company that makes room treatments and he STILL gave me advice on how to make my own. If I had the money to buy them, I'd buy them from him simply because of his ethics. 2) I did mention that wasn't very handy around the house, right? To be more specific, when we purchased the house my only power tool was a drill! Luckily, we purchased the house just before Christmas and when my parents asked what I wanted, I screamed, "TOOLS!"

So, armed with my drill, a brand new circular saw and cordless driver (power screwdriver for the uninitiated), and a box a fiberglass, I headed out to Lowe's to pick up the 1x4's I decided I would use to frame up the fiberglass. I had a design in mind (that I'm not going to describe here because I didn't end up using it) and I knew how large I needed to make the frames. Did I do the math beforehand, know exactly how many and what size lumber to buy, know what hardware I would need to put everything together? Hell no! I got there, stared at the lumber for a while, did some quick math in my head, added two boards to the number I came up with, grabbed some wood screws, and off I went! As I was in line to check out, I realized that I had not taken into account one aspect of my original design and I would probably need a good deal more wood than I had planned (using the word "planned" very loosely). But heck, I was next and I didn't want to wheel my cart (yes cart, not one of those special lumber carrying things but the plain old grocery cart with about 6 feet of lumber sticking out the front, precariously balanced, a danger to myself and everyone around me) back to the lumber section. Hey, I could always come back, right?

The fiberglass board comes 2' by 4', so, in my infinite wisdom, I bought 8' long, 1" by 4" boards thinking all I had to do was bisect the board in order to get two of the sides for my frames. This is good thinking because 1) I'd only used a circular saw a handful of times in my life so I figured that I should try to minimize the cuts I would have to make and 2) when it says that it is an 8' board, it's dead on 8' right? Not exactly. It's usually pretty close to 8' (a lot closer than I would have gotten it I was soon to find out) but you can't assume that it is dead on. You also can't assume it's exactly an inch thick but this is less important to my story. When I shared this "revelation" to my Father, he quickly informed me that I had "discovered" what 90% of the world already knew. Hey, I'm in the upper 10%! Or is it bottom?

I quickly discovered three things: 1) Apparently, tape measures will give you a different length every time you use them. I think it has something to do with Heisenberg's Uncertainty Principle - where you change the thing you measure simply by measuring it. 2) Cutting a straight line is a lot harder than you think, especially if the person that measured the two points you needed to draw the guide line can't measure. 3) Pilot holes for wood screws are a must (hey, I did mention I wasn't handy right?).

Truth be told, I didn't learn number three until later so my first attempt at building a frame ended with thrown lumber, stripped screws, swearing, sweating, a deflated ego, and a nagging suspicion that they don't teach you everything you need to know in life in college.

Jimmy to the Rescue

Enter Jimmy. I mention him by name because he deserves the recognition. Jimmy is a framer. For those of you that don't know what that is, he puts up the wood frames of houses. But before Jimmy was a framer he worked for a home remodeling company that had him doing a little of everything. As far as I'm concerned, Jimmy is the unrecognized forth leg in the Holy Trinity. Jimmy is also one of my climbing buddies (rock climbing). After my disastrous first attempt at building my own absorbers, I would slip little questions about problems I was having with my absorber frames as well as other home projects to Jimmy while climbing that he would casually answer without so much as a look that indicated how elementary he felt the question was. Now, that could have been because I asked the questions while he was hanging on the other end of a rope and one smart aleck remark could be the difference between a leisurely ride to the ground and a quick descent into pain, but I like to think Jimmy is a kind and patient person so I'm going with that. So, armed with new knowledge that every kid who has ever taken shop class probably knew before entering the class, I went back to the drawing board.

Optional Equipment (if you have this, you probably don't need to read this article):

This is the portion of the article where one would post pictures of the absorbers at different points in their construction. If I had taken pictures. Which I didn't.

So…..anyhoo…..you won't need pictures, they are not that complicated.