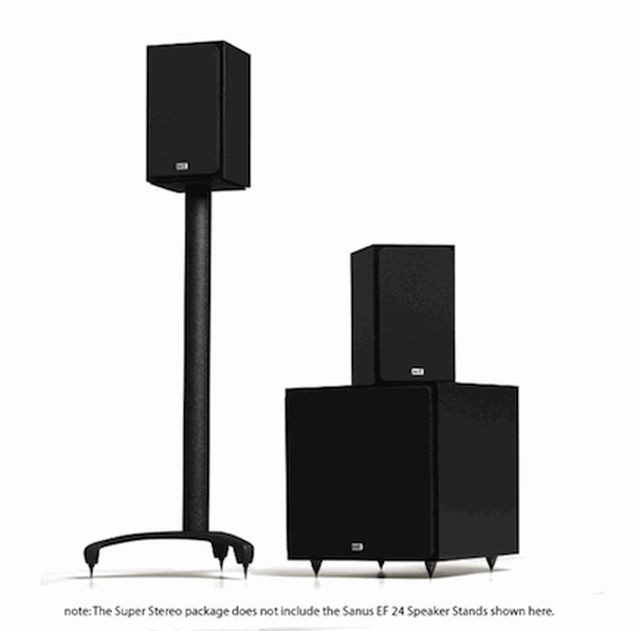 Legen … wait for it … dary. NHT’s SuperZero has been a force to be reckoned with in the budget bookshelf speaker market for better than two decades. Today’s SuperZero 2.1 naturally features some improvements over the original, but the basic formula remains unchanged: an ultra-compact, inexpensive 2-way, acoustic suspension design that concentrates on the midrange and highs, and leaves the low bass to a dedicated subwoofer. Now NHT is pairing the legend with their Super 8 subwoofer to create the Super Stereo: a 2.1 system aimed at delivering high quality audio for smaller spaces. With an MSRP of $600, and currently available for $499, the Super Stereo is a budget and space friendly alternative to the infamous “cube” type systems.

In speaking with NHT Co-Founder Chris Byne, he told us "Its the system I am most proud of.  Its easy to make an expensive high end speaker, very difficult to make one that is based on a $99 bookshelf."

For those unfamiliar with the NHT SuperZero, we’ll start off by saying it’s seriously small. Measuring at 9” H x 5” W x 5.5” D, this pint sized model is not substantially larger than a Bose dual cube speaker. Still, it boasts a true 2-way design featuring a 1” soft dome tweeter crossed to a 4.5” paper cone woofer at 2kHz. The crossover features 12dB/octave high and low pass filters, considerably more complex than what is often seen at its price point (which occasionally sees speakers with no crossover at all). The 4.5” woofer loaded by the sealed cabinet yields a frequency response with -3dB points of 85Hz and 20kHz, which should be adequate for crossing over to the Super 8 subwoofer without any holes in frequency response or issues with subwoofer localization, both of which tend to be problems with cube based systems. The SuperZero’s sensitivity is about average at 87dB with 2.83V at 1 meter, while nominal impedance is rated at 8 ohms, with a minimum of 4.3 ohms. Taking those ratings together with the power handling of 75W, and we’d expect the SuperZero to perform best with an amplifier competent down to 4 ohms, though it doesn’t necessarily need to be a powerhouse a' la the Emotiva XPA-1.

Frequency response and impedance curve of the SuperZero 2.1, courtesy of NHT

The other half of the Super Stereo system is the petite NHT Super 8 subwoofer. Measuring in at 11.2” cubed, the Super 8 sports an 8” paper cone woofer driven by 110W amplifier in a sealed alignment. Frequency response is rated from 37Hz (-3dB) to 210Hz with a -10dB point of 30Hz, while peak output capability is rated at a respectable 112dB @ 65Hz and 106dB @ 40Hz, both at 1 meter. While not exactly Bassaholic Extreme material, the Super 8 should add sufficient low end for music, and in smaller spaces provide sufficient power for a fun movie experience as well. The Super 8 also provides a few niceties including filtered line level outputs (6dB/octave, 100Hz), adjustable low pass filtering, and phase controls which should help it blend with the SuperZero even when using basic stereo equipment that lacks bass management capabilities. Nearfield frequency response of the Super 8 subwoofer, courtesy of NHT

The sound quality of the NHT 2.1 SuperZero speaker system was just phenomenal. Highs were natural and airy, and the speakers didn't flinch when driven to extreme volume levels. We loved their aesthetic appeal and only after experiencing these speakers in our own sound labs could we truly appreciate their well warranted great reputation. The NHT 2.1 speaker system seemed very linear and reproduced music without much coloration.

Taken together with an inexpensive stereo receiver or integrated amplifier, the NHT Super Stereo loudspeaker system has the potential to deliver a high performance 2.1 system for less than the magic $1,000 mark. Pairing the legendary Super Zero with the Super 8 subwoofer, the system does of course have certain limitations: it’s simply not made to deliver reference levels in huge spaces. Nonetheless, if you need of a compact stereo system to provide high quality sound in a den or a bedroom, and only have $500 to spend, we’d opine that the NHT Super Stereo is definitely worth a look/listen.

Read the Complete Thread
HifiAudio posts on May 23, 2015 13:13
The super 8 sub has an upper F3 of 210 Hz.
But any idea on the harmonic distortion upto that freq ? Can one use crossover of 210Hz with this sub ?
Does anybody have THD measurements for this sub ?

Thanks!!!
hk2000 posts on May 07, 2014 21:46
Generally I'm not a fan of video reviews, but I don't mind them with one exception: get rid of the music intro or at least cut it off AS SOON AS you start talking. Please!! Love NHT though- specially the legacy stuff.

Thanks.
Transmaniacon posts on January 28, 2014 07:35
I have the SuperZero 2.0s matched with a Velodyne DEQ-8R, and it sounds fantastic. I think my Velodyne is a bit more capable than the Super 8 sub, but both have a high pass filter that I think really helps integrate the SZ 2.0s. Looking forward to this review, they are a great speaker and at the current price it's a great deal for a smaller room system.
zieglj01 posts on January 27, 2014 16:51

gene, post: 1013462
Clint DeBoer is having a system shipped to him for review so we will see how it performs soon enough.

Good deal - nice to see that a preview will be turned into a review.
Post Reply