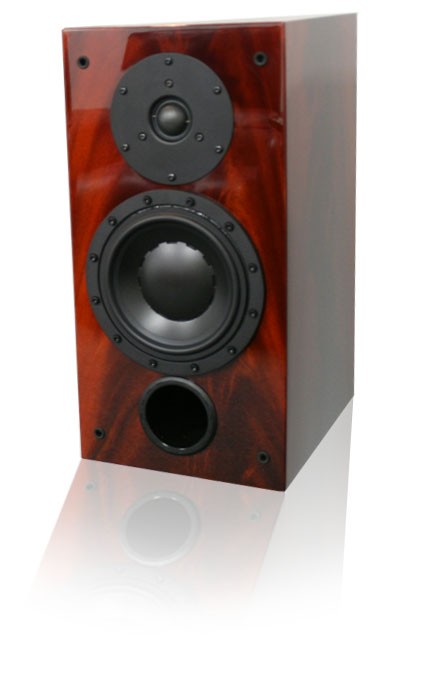 Elemental Designs has been striving to get more speakers into more living rooms over the last few years. While the new A7-900 subwoofer might not have helped too much (well, it is better than it's predecessor but at 400lbs+, it's not exactly going to be met with open arms by your better half). The W6-6TC Bookshelf speakers get something that most eD speakers are missing - wood. eD loves their hand made textured black finish and , while it certainly is durable, it probably won't be featured on HGTV any time soon. The new rosewood veneer on the W6-6TC Bookshelfs might do just that.

When you talk about good looking speakers in audio circles, Swan Loudspeakers often (I'd say invariably but maybe that's a bit strong) come up. Regardless how they sound (and many love them), they look fantastic. When eD decided they wanted to make a high spousal acceptance speaker, they did what few do - they looked for advice. The W6-6TC speakers are a joint venture with Swan Loudspeakers and have definitely benefited from the partnership. The rosewood veneer gets 7 layers of varnish on it to make it shine and to protect it. From the pictures we've seen, the finish looks outstanding.

The W6-6TC Bookshelf speakers features a 1.5" silk dome tweeter and a 6.75" pressed poly cone midrange driver. The midrange has a whopping 3" voice coil! The W6-6TC’s offer a quoted response from 43 Hz - 20 kHz, reaching well within the range of some tower speakers at a fairly compact size. These speakers were designed with 2.0 and 2.1 reference listening systems in mind. If they can truly reach down that low, they definitely could be a great entry level speaker for the discerning audiophile or perhaps those that are looking for a speaker that won't take up much space but also won't require the immediate addition of a subwoofer.

The rated sensitivity of 86dB/1m is a bit low and will allow aficionados to add additional amplification for augmented acoustic aid. The speakers aren't exactly small, however, at over 16" tall and 10" deep. They weigh over 25 lbs a piece which indicates sturdy construction and bracing. Reportedly, they are using 3/4" MDF for the walls and internal bracing. Currently, they are only selling 50 pairs a month - probably due to high manual labor in construction. For Audioholics readers, however, they are offering $175 off the $650/pair price. Just use audioholics_w6intro promo code on checkout. This introductory deal is only valid until June 15th so hurry!.

just listening, post: 612163
The 2.1SE/W6-6TC veneer finishes may just be the most beautiful under $1K. I'd be curious in reading a head-to-head comparison of the two, since the Swan is rear-firing and the ED uses front firing port.

I thought for $475 shipped to my door I would give them a shot(think they are still available for this with the “w6sale” code. In my opinion they still(like the Swans) need to be at least a couple feet off the wall to sound their best.

This user(ThorCorps) from AV123 forums has both the Swan 2.1SE's and W6-6TC's and noted some comparisons.

“I pulled the Swans off their stands and put these in their place and played a couple of songs. Sound very similar so far as expected. After they've broken in, I'll do a side-by-side with the Swan D2.1SE's as well as moving them into one of the smaller rooms to see if the front-port and different crossover make a difference in the low-end.”

“The eD does not have as prominent a bottom end as the Swan does (since the highs are similar between the two, it looks like they tweaked that by the cabinet/port geometry instead of by crossover changes).”

tgferg67, post: 612133
The stands are VTI - VSP series. I ordered the silver posts, did not care for the silver after setting them up and ended up painting them semi-gloss black.

BTW, what speaker stands are those? I like them…

The stands are VTI - VSP series. I ordered the silver posts, did not care for the silver after setting them up and ended up painting them semi-gloss black.
alphaiii posts on August 19, 2009 01:53

tgferg67, post: 612100
I have had a pair since April.
They have a beautiful wet look finish that my camera can't capture.