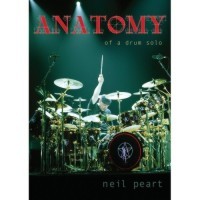 This year has been a good one for RUSH fans. The Canadian trio has been together for over 30 years, and continues to have a dedicated following. Two recent DVD releases are sure to please the long time fan, with both old and new material to choose from.

Ask any Rush fan - the highlight of a live performance by the band has always been drummer Neil Peart's solo. Now for those of you who may not be familiar with Peart, he is widely regarded as the best rock drummer alive. In fact, many consider him one of the greatest drummers in the history of rock & roll. His drum solos are a very musical experience that covers many genres and will leave you amazed.

The release of Anatomy of a Drum Solo is nirvana for fans of Peart. Not only does the disc capture his most recent solo in great detail, but also fully documents his approach to soloing, as well as the structure and methods he uses. It would be easy to write this off as an instructional video that would only be of interest to drummers. But it is much more of a documentary that any true music fan or musician will find interesting. Peart is extremely intelligent and well-read, and he begins the main program on Disc 1 with a short history of the drum solo. It is almost a mini-documentary on the evolution of drumming and concert soloing.

For the project, Neil's current concert drum kit has been set up in a studio for him to demonstrate with. He begins by explaining his thought process during the construction of his solo for Rush's recent 30 th Anniversary Tour. The solo is shown in it's entirety, and then he sits down at his kit and begins to take the solo apart section by section, explaining and demonstrating the methods used. This part of the program might be a bit dry for some of the non-drummers out there, but is still very interesting. What starts out as fascinating soon becomes amazing, as you realize that every beat of the nine minute solo has been calculated, and represents a style, emotion or salute to a genre or individual. He approaches his drum solo with the same depth that a great songwriter approaches a lyric. (He is also an accomplished lyricist, writing most all of the band's lyrics over the past 30 years)

The DVD packaging is very nice. It is a 2-disc set, with a full color booklet. In addition to the main program discussing the solo, there are several bonus features included as well. Earlier solos are included from the Vapor Trails and Counterparts tours, as well as interviews with longtime Rush engineer Paul Northfield and current drum tech Lorne Wheaton. This piece is very educational for anyone interested in how mic placement, styles of drum tuning and different rooms all contribute to the challenges an engineer faces when searching for the best possible recording, both live and in the studio. Also included are 2 "explorations" that I will explain further below. In addition, there are performances with Rush of "Tom Sawyer" and "Subdivisions" from the perspective of the drum cameras from the 30 th Anniversary Tour. (There is a section just before the verse of "Subdivisions" that is one of the more amazing patterns he has ever come up with in a song - don't miss this)

The DVD sounds amazing. It was recorded in 5.1 Dolby Digital, and for the solo sections, the mix has been assembled as if you are sitting on his drum throne. As he rolls from his left to right, so follows the sounds from your front speaker array. There are two "Explorations" which are basically Neil sitting at his kit and noodling around for over 30 minutes (each). He refers to these as "workouts," but most drummers would give their left drumstick to be able to "workout" like this. I really cranked up the volume on these, and it is just an amazing experience. It will work your system from the tweeters all the way down to your sub (not to mention your amp) in a way you probably have not experienced before. The sonic character of the drums is astounding - as close to having a set of drums in your room as humanly possible. I have many times had people (notice I was careful NOT to say my wife ) ask me why I want to listen to music so loud. My response always goes back to drums. Have you ever sat in a room or a studio with someone sitting at drum kit playing? It is LOUD. The sharp crack of a snare drum will make you blink, or even wince. The other instruments & amps build around that until you have a balanced volume. Being able to listen to music at a volume that approaches a true "live" level on a great set of speakers begins to approximate the experience of listening to a live band perform.

The picture quality is not bad. It is shot in widescreen video, and the drums in the studio are well-lit. My only complaint is what seems to a star filter effect coming off of much of the hardware on the set. The 30 th Anniversary set has brilliant gold plated hardware, and the Sabian cymbals are shined to a glossy finish as well.

Anatomy of a Drum Solo far exceeds the expectations of an instructional video. It is so much more, and will hold captive an audience of not only musicians, but music lovers as well. The creators of this program have done an excellent job at producing a project that is unique and a real kick for audioholics to exercise their systems with. 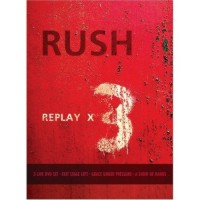 As for the performances, I had the most fun watching Exit… Stage Left . It transported me right back to high school, when finding a copy of this VHS tape was like finding the Holy Grail. It reminded me that back then, we didn't have the Internet, MTV was just beginning to crank up, and Circus Magazine was one of the only ways to even see photos of bands. So it was a big deal to get to see a concert video (videos were still a fairly novel concept), and an even bigger deal to find one that showed some behind the scenes footage and interviews with your favorite band. So with all the sentimental feelings flowing as the disc began playing, I found myself fascinated by how young and nimble these guys were in this performance. Geddy Lee (bass and vocals) is at the top of his game. Let's face it, he ain't no Pavarotti, but he is in good form here, and it is great to see the band playing songs like "Tom Sawyer" and "Limelight" live for the first time (on a tour). There is an energy that I had not seen from these guys in years. The picture quality on this disc is my favorite of the 3 discs, probably because it appears to have been shot on film (not video tape). This disc alone is worth the price of the set.

The Grace Under Pressure disc finds the band in horrific 80's garb, dressed in really bad clothes with really bad hair. But the material is strong, and the performance is excellent. There is both a Dolby Digital 5.1 and a DTS 5.1 mix available. I found the DTS mix to have much deeper bass - a bit too much for me. I preferred the DD version. The picture is quite soft, shot on video. I am sure the light show at the concert was great, but it is not lit well for video. On my 123" screen it was even a bit fuzzy, especially on wide shots. But the value of this is as a memento - it is not a disc you are buying for the quality of the video transfer. For me, the clear highlight of the disc is SCTV's Count Floyd appearing on the video screen introducing "The Weapon". "It's a very scaaaary song!"

A Show Of Hands finds the band touring after twelve studio albums spanning thirteen years. The 80's are coming to a close, and the wardrobe and hair is not quite as entertaining as the Grace Under Pressure show. The eighties took their toll on many bands (Rush was not immune); there are a few poppy synth tunes here that made me cringe. But all is not lost - there are the Rush standards such as "Tom Sawyer" and "The Spirit of Radio", and this is the only one of the three shows in the set that includes a Neil Peart drum solo ( The Rhythm Method ). Again, the DTS mix is much more low-end focused. I found it a bit cleaner on this disc, though. It is a bit meatier, and once I pulled my LFE channel down a bit, it was much better. (All the live Rush concert video or CD mixes (Alex Lifeson) tend to be typical rock and roll mixes - heavy bass, loud guitars, lots of crowd noise). The picture quality is much better than Grace Under Pressure , but still far from reference.

The fourth disc in the set is a CD copy of the Grace Under Pressure tour (the only show in this collection that was not previously released on compact disc or vinyl).

This material is almost 20 years old, and they have done a great job of making it enjoyable in the modern DVD format. The audio quality is average, but it is the best this live material has ever sounded. The video quality is not great, and it is not widescreen. The packaging is pretty cool, with a four-panel folding keep-case. The only extras are the three reprinted tour books, which are a very interesting reading and are great memorabilia from this slice of the band's career.

If you are looking for the ultimate in audio and picture quality from a Rush concert DVD, I suggest R30 , the band's recent 30 th anniversary DVD package (widescreen, high-def). But I urge you, especially if you are a Rush fan from the 80's, to check this set out. It is pure nostalgia!

A Show of Hands