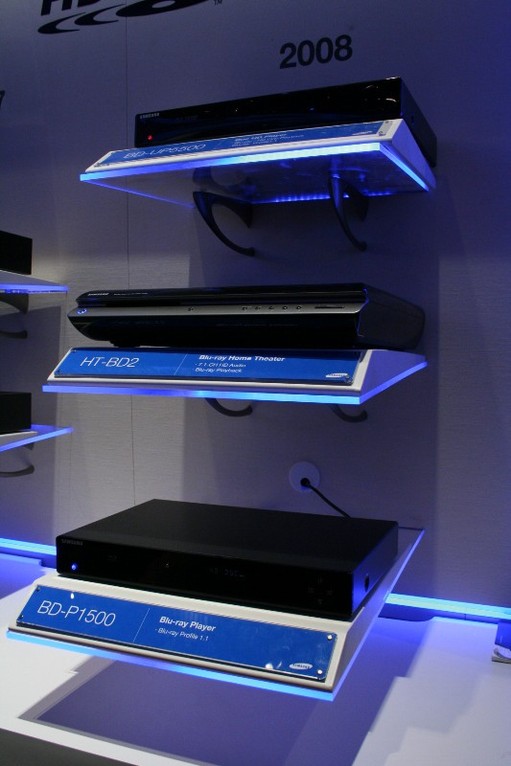 As the first company to introduce a stand-alone Blu-ray player, Samsung reinforces its support of the Blu-ray format with the Full HD BD-P1500. An ideal player for anyone who enjoys Blu-ray, DVDs or CDs in their home, this model takes the home viewing experience to the next step and accommodates all of these formats in one unit. What’s more, it can upconvert standard DVDs to 720p, 1080i and 1080p resolutions and offers Full HD video playback capabilities for a crystal-clear picture.

Designed with fans of multimedia technology in mind, the BD-P1500 easily connects to other digital peripherals through an HDMI 1.3 port with CEC for expanded color delivery and easy home theater control. With its built-in Ethernet connection, users can quickly take advantage of BD Profile 1.1 interactivity and download the latest firmware upgrades and more with just a click of a button. Making firmware upgrades simple and easy, Samsung allows consumers to continually upgrade their BD-P1500 with the latest features. True audiophiles will love the BD-P1500 as it goes beyond standard Dolby Digital and Dolby Digital Plus audio playback to include 7.1 PCM, Dolby TrueHD, DTS-HD High Resolution and Master Audio, Bitstream audio output via HDMI and more. The BD-P1500 will be available in June 2008. Our contact within Samsung indicated that it is not beyond the realm of possibility that this player might be delayed in order to include Profile 2.0 functionality considering that other players with 2.0 are being release around the same time. This player will retail for $399.

The DVD-F1080 is an amazingly compact, high-performance player with an elegant and stylish design that rivals its incredible output capabilities. Only slightly larger than a DVD disc, this minimalist design that utilizes touch-sensitive controls for a simple, user-friendly experience is sure to look great in any setting. But there is certainly nothing minimal about the DVD-F1080’s performance.

This slim, powerful DVD player can upconvert standard 480p discs to 720p, 1080i or 1080p better than ever before. It also features extensive multimedia file playback capability, including DivX, MP3, WMA, MPEG4 and more. Add to that HDMI-CEC output for home theater access and expandability, and you have an easy-to-use, high-performance player that not only looks great, but does it all. The DVD-F1080 will be available in April 2008 at $99. For more information, please visit www.samsung.com.