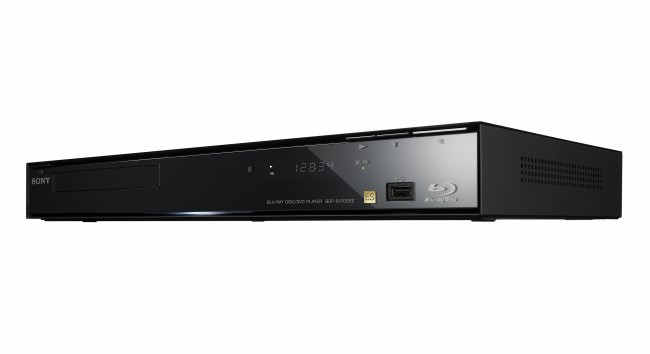 Photo/music/video playback via USB and DLNA

Adding to its high-end 3D capabilities Sony has announced new entries into its ES line that feature HDMI 1.4 capable receivers and, more significantly for this article, the BDP-S1700ES 3D Blu-ray player. The new Sony equipment is designed to sit alongside your BRAVIA HDTVs with 3D capabilities. But if you want to spend mid-fi money on products with the Sony logo, you’ll now have to go to the brick-and-mortar store to buy your hardware as internet dealers are getting the-pinch. Sony has basically announced that the new products are available exclusively at specialty AV shops and custom installers.

So now Sony's Elevated Standards (ES) line now includes a $400 Blu-ray player, the BDP-S1700ES, as well as a line of receivers. This includes the entry level STR-DN2010 retailing for $800 to the higher end $2000 STR-DA5600ES. In addition to network functionality, the new Blu-ray player is fully 3D ready and also has an IR input, Wi-Fi (802.11n) and an added bonus: you can download an app from iTunes to control the player from your iPhone or iPod Touch. The app allows the hand-held to function as a remote control and displays Blu-ray Disc details such as jacket artwork, actors, and film/TV information as well as allow you to search for related video clips online. It is also available for Andriod devices.

The player supports full HD 1080p single BD disc playback as well as support for DVDs, CDs, and even SA-CDs.
It is Blu-ray 3D capable with the latest formats so it should be ready as soon as studios decide to actually release real software that supports the new format. BRAVIA Internet Video and Sony's Qriocity, an oddly VUDU-like streaming media service. There is an IR input jack on the rear panel for easy control system integration and built-in 802.11n Wi-Fi with support for WPS encryption. An Entertainment Database Browser allows easy identification of discs with Gracenote technology and you can play back photos, music, and videos via USB and DLNA streaming (from Windows-compatible devices). DVD upscaling is provided to 1080p with Sony's Precision Cinema HD Upscaling circuitry. And of course, the player supports Dolby TrueHD and dts-HD Master Audio decoding.

It’s just too bad Sony chose to pull away from online retailers. The press release says they’re doing it to "…focus on seamless integration with customer home theater control partners…". Only specialty dealers and professional installers will have access to new 2010 Sony ES sales. The new 3D BD player will be available this August.

Today's A/V electronics are so complex as to require many folks to seek an installer. Installer's sell equipment. Taking ES off line gives an installer an incentive to carry ES. Is it a good move for Sony? Well, they still do everything other than ES on line, and ES today, at least right now, is nothing more than a handful of receivers and one Blu-Ray player. One thing I think Sony is missing in their line-up today is a pre-amp/processor. Update the TA-E9000es and I'm sure it would sell quite well.
thejumbo posts on October 11, 2010 18:10
And yet in all of that, no one mentions that this carries the 5 year warranty of all ES pieces. For $400, that is a damn bargain.

And what is wrong with Sony preventing online sales and dictating what dealers sell their products for? If everyone who carries Sony has to sell at the same price, then it becomes about the product and the service from the dealer that make the decision for the buyer, not a cheaper price - the way it ought to be.
paul_houle posts on July 29, 2010 16:37
Stupid…

Vendors of quite a few luxury products only bother to have stores in NYC and LA – yet an article in the Economist quotes the example of one luxury brand that was astonished to discover that it had customers in the other 48 states once it started selling online… And came to see that it could be selling 2x-3x as much stuff as they do now.

People who buy expensive products often have more money than time, and they just might not want to drive a few hours and deal with useless (in fact, outright harmful) salespeople – particularly when the only benefit of doing so is you get the product a few months ahead of everybody else.
Post Reply