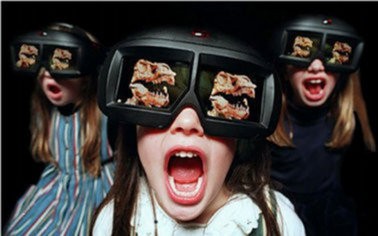 Nintendo unveils 3DS and quickly follows-up with a statement about dangers to children under 7 playing with the company’s new portable gamer.  Samsung releases a line of 3D HDTVs then issues a warning about its potential health risk to certain viewers. What they haven’t told you is that these warnings come after years of industry spin and cover ups. The truth is that prolonged viewing of 3D video may be even more harmful than the consumer electronics industry wants you to know.

Before you bring a 3D HDTV into your house or let a child under seven play with a brand new Nintendo 3DS, you need to understand the fragile development of an aspect of human vision called stereopsis.

Stereopsis, a result of the frontal placement of our eyes, is the process in visual perception that lets us see depth. Two slightly different projections of the world enter our retinas, which causes us to see in real-3D. Stereopsis made us humans into mighty hunters of prey, builders of civilization and crackers-open of the occasional bottle of beer – but this important process is being tricked every time we watch a 3D movie.

Stereoscopic vision begins developing when we first start using our eyes and is generally considered complete by the time we’re around six years old. That’s when the tiny nerves and muscles behind the eye are fully formed and have learned to work in conjunction with the brain to respond automatically to visual cues that provide seamless depth of vision. Unfortunately there’s a malaise in children that can prevent full stereopsis from developing, called strabismus. This condition is also called lazy-eye but has nothing to do with laziness; it’s an abnormal alignment of the eyes in which the eyes don’t focus on the same object and depth perception is compromised.

There is treatment for strabismus that involves helping a child’s nervous system to learn stereopsis, causing it to eventually become a natural response. But the ability to re-learn has its limitations, and treatment has been met with limited success beyond a certain age.

In the 1960s, Nobel Prize winning research by Drs. Hubel and Weisel came up with a critical period during which the optic nerves learn stereopsis – the time up to 7 years old. Doctors thereafter used this critical period as the point-of-no-return for treatment of lazy eye. The old way of thinking was that lazy eye can’t be treated after 7 years old.

However, recent medical science indicates that the nervous system never stops learning and re-learning. Doctors today will tell you it’s never too late to try to treat strabismus – or re-teach the optic nerves the trick of binocular vision. The chances of success may be diminished beyond seven, but there’s still a chance.

So, if it’s never too late for the optic nerves to learn correct vision, one can surmise that it’s also never too late to learn bad habits that could create visual problems.

Anyone who learned the technique that allows them to peer into stereograms has taught themselves a temporary form of lazy-eye. Stereograms are those pictures that look like confetti but transform into three-dimensional images if you stare into them long enough. They’re popular with college kids experimenting with Escher.

The modern digital 3D effect using glasses makes this same effect effortless. Your eyes are invited or forced not to properly focus in order to get the full effect of eye-popping 3D.

Some people report being temporarily disoriented when walking out of a 3D movie. Walking into the light while your vision shifts back to active binocular depth perception can indeed be disorienting for anyone. The effect is described by virtual reality researcher and co-developer of VRML Mark Pesce as an effect similar to having sea legs.

When you take off the 3D glasses, Pesce says, “…it takes time to get your land legs back”. During that lag period where you’re re-learning binocular vision, your depth perception is compromised and you may lack the visual acuity required to perform tasks, such as driving.

What happened to 3D Virtual Reality?

Do you remember in the mid-90s when virtual reality headsets were going to be the next big thing? Do you wonder why the whole technology just sort of… went away?

VR pioneer Mark Pesce has spilled the goods. Audioholics was able to contact Mr. Pesce via Twitter where he answered a few questions for us regarding his work with Sega and the mysterious disappearance of its VR project.

Over 15 years ago, Mark Pesce worked with Sega on its VR Headset, which was intended to plug into the Sega set-top-box. The headset was going to provide gamers with a virtual reality 3D environment. Of course Sega wasn’t the only one developing a VR headset at the time, and we all expected to be running around in 3D environments when graphics evolved beyond chunky wireframes of the early VR visuals. We thought the technology was just around the corner.

With a working VR Headset almost ready for market, Sega had the product tested by a third party lab, the Stanford Research Institute (SRI) at Palo Alto California - the results weren’t pretty. The lab at Stanford came back to Sega with dire warnings about the hazards of prolonged use of this technology. SRI warned Sega:

“You Cannot Give This To Kids!”

Pesce says that Sega took the test results and buried them. Fearing lawsuits and consumer backlash over health risks, the VR Headset never made it to market and neither did the truth about the dangers of prolonged exposure to 3D virtual environments - until now.

The results of SRI’s research have been published and there is an unclassified document from the defense department of Australia that says there are a variety of “…unintended psychophysiological side effects of participation in (3D) virtual environments.”

Children under seven are at risk of strabismus – period.

Going to a 3D movie each month probably won’t hurt anyone’s vision, especially adults; however, if we introduce the 3D effect into the home, we dramatically increase our exposure. We could sit at home with our new 3D HDTV and watch non-stop 3D for days. Even 2D video that hasn’t been coded for the FHD3D format can be upconverted by consumer-grade 3D HDTV through 3D interpolation mode.

Now you’ve gone from tricking your optic nerves into self-imposed strabismus once or twice a month to potentially hours every day – and evidence already suggests this could be harmful to your vision.

So far, the only real research we have on the effect of prolonged exposure to 3D virtual environments has concluded that the health risks are real. The only defense the Consumer Electronics industry has for the new line of 3D HDTV is that since the research is over fifteen years old, maybe there are new factors using the modern implementation of the technology. So, more research needs to be done before we can conclude that 3D HDTV is safe, even for adults.

The good news is that your new 3D HDTV is also very good at displaying 2D images. So, until we get more information, we advise protecting yourself and your family by using that new HDTV for standard 2D viewing a majority of your time.

I wanted to respond since this thread comes up high on the list when searching about 3D TV health hazards.

This is remarkably difficult information to find online but I'm an old %#@& hard-core gamer and I remember using both the Sega VR & the Nintendo Virtual Boy.
They were wire-frame rendering devices and relied on the user crossing their eyes to turn the two wire-frame-meshes into a coherent 3D image - like SIRDS (google images SIRDS).

No one would have ever gotten the eye damage from “long term use” because you couldn't use the thing for longer than ~10minutes without a head-ache or eye-ache making you stop first. This is why it was canceled, the previews all were “Interesting, but don't buy”.

The current generation of 3D tech is different. There are two different strategies available, so-called ‘Active’ & ‘Passive’. Neither require you to cross your eyes.

Any study down on the archaic Sega VR or Ninentdo Virtual Boy would not be applicable to today's technology.
There may still be eye-strain risks but since I have used all of the systems involved I can offer the anecdotal evidence the using the VR or VB was a miserable experience, using a slow Active system (in 1999 @ 30Hz) was nauseating after an hour, and so-far using a Passive system was mild eye-strain after an hour.
FALCONSEYE posts on December 07, 2010 17:25
just my 2 cents: i did look at couple led 3d tvs and it did give me a headache after a few minutes of watching. i haven't been to any movie theaters showing a 3d movie yet. on top of that, i didn't think that the tv worths all the hype. it looks like the postcards we used to have when we were kids. you would tilt the postcard to see a 3d image. i will have to pass on this technology.
KHalleron posts on December 07, 2010 17:04
Lots of scaremongering, few facts

I have strabismus - it wasn't discovered until I was over 30. Can I drive and otherwise navigate the world without falling over or hitting things? Of course. The only thing I really can't do is play tennis or other sports that involve hitting moving objects, but that's little loss.

And I love 3d - it's the only way I can see in 3 dimensions, so for me it's like a trip to fairy land. However, there's obviously nothing wrong with my nervous system, the problem is with the alignment of my eyes.

And far from 3d viewing hurting my vision, to the contrary. After prolonged 3d viewing, my depth perception actually improves temporarily. Alas, only temporary. There's no way due to the terrible eyestrain inherent in 3d viewing could I use this as a method for permanent vision restoration. Wish I could.

So maybe restrict it a bit for young children, but otherwise I think you're nuts.
Phosvfx posts on September 07, 2010 17:35
Why not leave it all on focus?

Good article. I have a question; couldn't a 3d filmmaker leave everthing in
focus and just allow the audience to focus their eyes naturally? Or is this
somehow overriden by the brain?
loccdogg posts on July 20, 2010 18:35

ned, post: 729054
Thanks for your input. Unfortunately common sense is lost in this day and age. We have to blame somebody for our own short comings and there are professionals ready to gain from all of these.