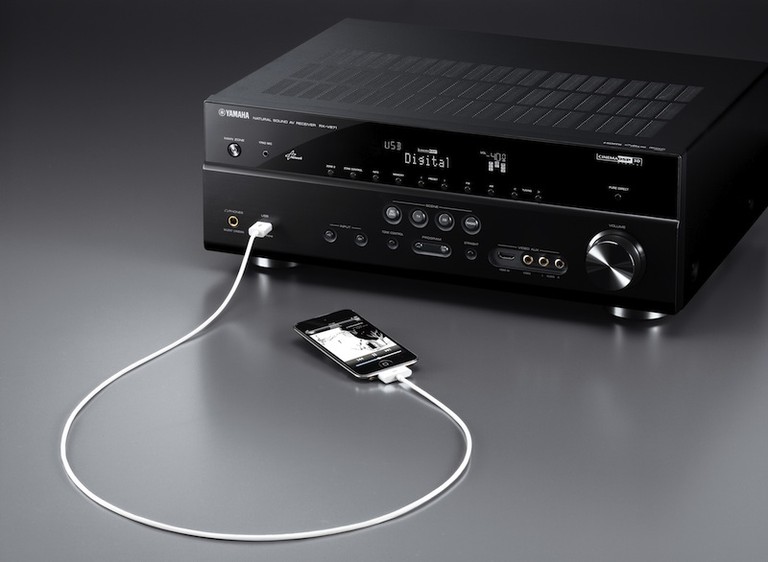 We don't know about you, but when receiver manufacturers start announcing new lineups of products, we get as giddy as schoolgirls. This is our Christmas. Our Cannes. Our SXSW. Our Fashion Week. No, we probably won't be buying but we have a whole new lineup of receivers to check out, talk about, and figure out which is the best to recommend to our friends. It's a time of charts, graphs, and spreadsheets. It's a time to watch forum fights between shrills from various manufacturers turn first looks and reviews into flame wars.

The big push this year with Yamaha is top-end features, improved Apple product integration and enhanced network content streaming. We've had a bone to pick with Yamaha in the past in that they've required the purchase of external docks for anything other than the most basic of MP3 integration. Often it was either buy the dock or use a 3.5mm port on the front of the unit. That's no more. The RX-V671 has a front pane USB port for iPod/iPhone (and one assumes iPad) integration. This provides a direct digital connection using the standard 30-pin dock connection to USB cable included with your i-device. You can then control and play audio content with the supplied remote including a display of the song title, cover art, adn playback information on the receiver on-screen menu. While it doesn't include video streaming, it is a HUGE step in the right direction for Yamaha. Of course, if you want complete integration, buying one of their docks is still an option.

On the enhanced network content streaming front, the RX-V671 includes both DLNA 1.5 and Windows 7 certification which gives owners access to Internet radio, Rhapsody, SiriusXM Internet Radio, Pandora, Napster as well as content located on DNLA support networked computers and storage devices. Yamaha, like just about everyone else on the planet, has a dedicated free remote app that can be used to control basic functionality as well as internal sources, network content navigation and zone controls. There seems to be no provision for calibration and settings, an odd omission, but perhaps there is some logic to only allowing users to access those controls on the remote - a remote that is sure to be hidden away when a remote app (only available on i-devices at this time) is the sexier control solution.

All of the '71 series receivers are 3D capable and feature audio return channel . All video (even inputs over HDMI) can be upconvered to 1080p and output to the single HDMI output. There are six HDMI inputs on the back on one on the front. There are seven pairs of five-way binding posts on the back for each of the seven amplified channels as well as two sets of spring-type posts for additional speakers. You can use the back channels to bi-amp your speakers with the five-way binding posts or use the spring type for presence or Zone 2. There are line outputs for a single subwoofer or Zone 2.

Inputs are modest on the non-HDMI front. There are two component video inputs, five composite video (one on the front), two each optical and coaxial digital audio, a five stereo analogue audio inputs (again, one set on the front). There is no provision for 7.1 channel inputs or outputs for integrating legacy gear or external amps. The Yamaha RX-V671 claims 90W per Channel (8 ohms, 20 Hz-20 kHz, 0.09 % THD, 2 ch driven) though you can check the specs on their page and see the receiver driven into different loads with different numbers of channels engaged. We like that they chose the more universal measurement on their marketing claims as others might have chosen a different one that artificially inflates the wattage rating.

There are a lot of convenience features included with the RX-V671 receiver. Of course their YPAO room correction and calibration system. The upconversion supports Deep Color (30/36 bit), x.v.Color, 24Hz Refresh Rate and Auto Lip-Sync compensation. High quality video processing with precise deinterlacing supports motion adaptive and edge adaptive deinterlacing and multi-cadence (incl. 3-2 pull-down) detection making even bad sources look good (theoretically at least). There is a new simplified GUI (Graphic User Interface) replacing the white text on black background we've grown to know. This GUI can be overlayed on your HDMI output and 3D video signals for increased ease and speed of use.

As Yamaha is wont, they've included a ton of DSP modes (17 in all) with CINEMA DSP 3D being the newest they are touting. This proprietary Yamaha virtual presence technology claims to enhance all HD audio content by adding the height and ambient dimensionality to the home theater experience, without the need for extra front speakers. Of course, they still include the ability to add physical height channel speakers so one wonders about its effectiveness.

Some users might note that some of the more popular buzzwords are missing like Audyssey DSX, Dolby PLIIz and others but that's just because Yamaha has their own proprietary systems in place. In the case of the height channels, Yamaha's been doing it longer than anyone. What we think is missing at this price point are a few more inputs (specifically component video) but more importantly outputs for adding an amp and second sub support. At $600, a second sub definitely seems warranted.

There is a whole lot to like with the Yamaha RX-V671 starting with the price. At under $600, you are getting a full suite of networking features including out of the box iPod/iPhone integration via a front mounted USB port. App support is practically a must these days and, aside from no Android support, is present. Yamaha has included a robust amp section and the ability to power a second zone with the surround back amps. Burr-Brown 192kHz/24-bit DACs are included for all channels, onboard deinterlacing looks to be top notch, 3D is supported, and you can scale all analogue and HDMI inputs to 1080p. While there are a few features we would miss, for most consumers, the RX-V671 packs a lot of punch in a very affordable package. The Yamaha 71 Series A/V receivers, including the RX-V671, will be shipping in Spring 2011.

If your saying that you are NOT impressed, I'm with you. I don't really care about Apple connections. I like to listen to my music uncompressed aka vinyl or CD and not low bit rate quality MP3s.

Yamaha clearly listened to their marketing department offering Apple and improved networking capability. It saddens me to think they didn't look after the real audio concerns dropping pre-outs like they have.
sholling posts on April 13, 2011 11:32

admin, post: 805901
At under $600, you are getting a full suite of networking features including out of the box iPod/iPhone integration via a front mounted USB port. App support is practically a must these days and, aside from no Android support, is present.

I imagine you could just use wireless networking and the DLNA server Android app, or the mini HDMI port found on many Android phones.
its phillip posts on April 12, 2011 08:37
:/