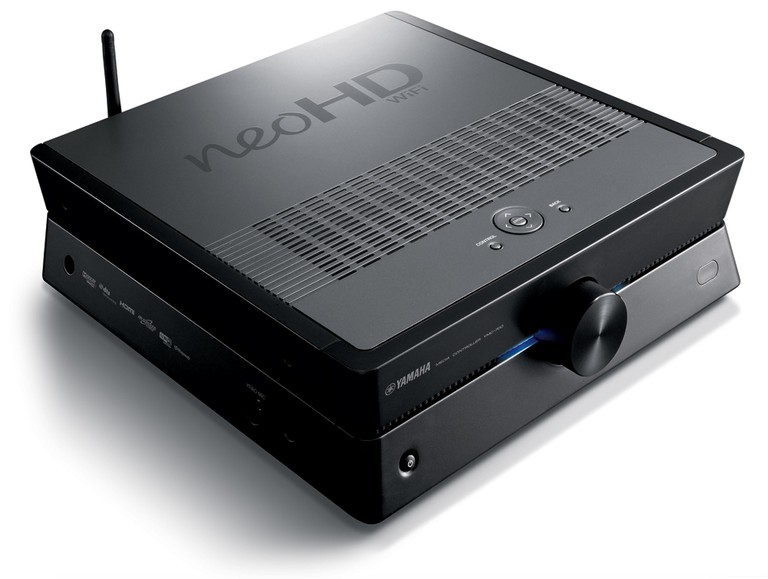 Yamaha has been seemingly trying to reinvent itself recently. While the MusicCAST2 may not have been very innovative (as it took many of its cues from its competitors), the new neoHD Media Controllers are showing us innovation that we wouldn't have expected. While the new Media Controllers share the same styling as the MusicCAST2, they are essentially receivers. Audioholics may recognize them as the beginnings of a Home Theater in a Box package, but their innovative interface may just revolutionize how we interact with our gear.

The neoHD Media Controllers come in two flavors, the YMC-500 and the YMC-700. The only difference between the two is that the 700 has built in wireless networking. This allows you to stream content from Rhapsody, Internet Radio, and your PC (no word yet on Mac support). Other than that, you're looking at two identical products. The black and blue color scheme (there is a silver/blue option as well) is back along with the "squished hourglass" shape that was introduced with the MusicCAST2. There are three HDMI inputs, two component video, one composite video, a set of stereo RCA inputs, and a single coaxial and TOSLink digital audio inputs. Outputs are limited to HDMI which means that all video will be upconverted through upscaling doesn't seem to be on the plate. At a $600 - $800 price point, this isn't unexpected. The YMC-700 has an antenna for wireless receiving as well as an Ethernet port. There are spring type binding posts for a 5.0 speaker system as well as an RCA output for a subwoofer. iPod dock support (needs to be purchased separately) as well as FM reception is also available. There is a USB port (inconveniently located on the back) for firmware upgrades and picture and music (file types not specified) playback. None of this (other than the small size of the unit, the aesthetics, and the limited number of inputs) is all that different. What is innovative, are the remote control outputs.

The YMC units both support one IR input and three outputs. The outputs can be matched with dual flashers for control of up to six components. What Yamaha has done is integrate a universal remote system and a receiver into one! While most people wouldn't think of trying to install such a system on their own, the YMC interface makes it easy. After attaching the included IR flashers onto your gear, the on screen interface will walk you through identification and setup of your gear. From there, you can throw away (not really) your other remotes and use the basic one that is included with the YMC unit. You'll notice that the remote is very simplistic with very few dedicated buttons. This ends up being OK because you can hit the Control button and get an on screen overlay of the buttons you are missing on your particular device. While this may make for a few more button pushes for functions, many users may find it worth it for an uncluttered remote.

What is unclear at this time is how compatible the neoHD units will be with legacy gear. The overabundance of HDMI inputs (in comparison to other types) suggests that the neoHD units are designed to work with new products. Also, consumers may be frightened away from what looks to be a much more intensive setup process than they may be used to. We here at Audioholics have had experience with multiple universal remote systems and know that the hardest part of the systems is programming the macros. Well, Yamaha is doing that for you with the neoHD units. We think that if this new functionality catches on (and we hope it does), it may revolutionize how Joe Consumer interacts with their system. We also hope to see similar functionality trickle up to some of Yamaha's other products.

What is not really talked about is power and other "receiver specific" specifications with the neoHD YMC-500 and YMC-700 Media Controllers. They are obviously using digital amps for the space but don't expect to be able to power low sensitivity speakers with these units. Yamaha is offering a bundled YMC-500 and two speakers and a sub (we use the term liberally here) for the price of the YMC-700. One of the features they are touting is the DSP "AIR SURROUND XTREME" (the capitalize it, so we have too). This is a pseudo-surround DSP that utilizes only two speakers and a sub. This is probably phase based and our experience with the Yamaha soundbars indicate that at best it will suffice though not really replace a true 5.1 system.

While the YMC units support Dobly TrueHD playback, only DTS is mentioned which probably means that DTS HD is not supported. It does support Deep Color and has lip sync. Compressed audio enhancer is present (something that surely could be of use in a product at this price point) as well as a limited (for Yamaha) number of DSPs (only 5). YPAO auto room correction is available which will help most entry level users with the basic calibration that they may not have the equipment or knowledge to do themselves.

While the neoHD YMC-500 and YMC-700 may not be the most full featured of products, they are taking a huge step forward in system integration. While most entry level users would never dream of integrating a universal remote product into their system, Yamaha's neoHD Media Controllers are taking all the guesswork out of it. The biggest challenge for Yamaha now is to help consumers understand just how cool the neoHD products can be.

Learn more about the YMC-700

Learn more about the YMC-500

Learn more about the YMC-S21

slowlybuilt, post: 593710
This would be a killer product if they included video streaming in addition to audio streaming. It is already connecting to your PC via ethernet or WiFi to playback audio, why not add video codecs?

Then it becomes an all in one solution. Stick one of these in every room that you have a TV in and your central media server can dish up everything. If you have a HTPC with TV tuners, you no longer need additional cable boxes for each TV, just put one of Yamaha's media extender/amp/receiver combos in every room!

TV+speakers+neoHD and no need for other boxes in the room!!!

I'm sure if they continue to make this line they will eventually do so. Maybe someone can finally put Apple in their place and put something out that does more for less than the Apple TV.
slowlybuilt posts on July 09, 2009 05:53
Video streaming!

This would be a killer product if they included video streaming in addition to audio streaming. It is already connecting to your PC via ethernet or WiFi to playback audio, why not add video codecs?

Then it becomes an all in one solution. Stick one of these in every room that you have a TV in and your central media server can dish up everything. If you have a HTPC with TV tuners, you no longer need additional cable boxes for each TV, just put one of Yamaha's media extender/amp/receiver combos in every room!

TV+speakers+neoHD and no need for other boxes in the room!!!
Seth=L posts on July 03, 2009 09:22
I have to admit, I think this is a good idea and it's very cool. The only thing that is absent that I would like to see is at least a backlight monochrome lcd display, it's cheap and lets you know where you are at on the unit itself.
Post Reply