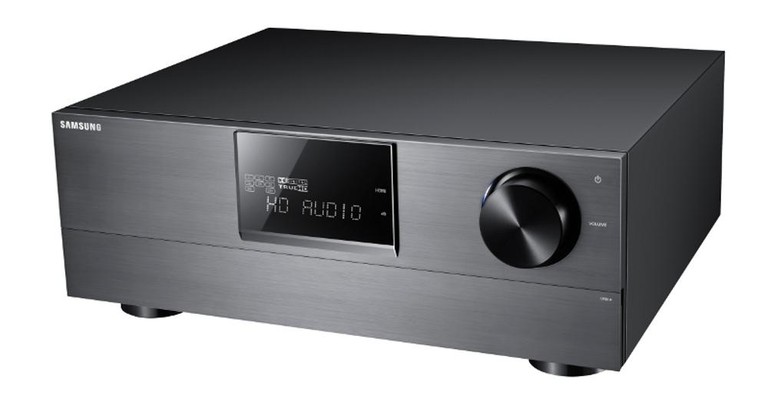 With the advent of Blu-ray players and advanced, hi-def gaming systems and all that they require, it has become increasingly important to have a centralized unit that can handle not only the latest audio formats, but also the centralizing of your HDMI sources. A recent quote from a popular TV show comes to mind, "Is there anything that money can't do?" If you have the means, you can get any number of high-end pieces to act as a video and sound hub for your AV/gaming needs, but for those without limitless resources, but with enough to get Blu-ray and the occasional Xbox 360 or PS3, there needs to be an economical answer to this need. The $399 HW-C700 receiver is Samsung's answer which packs many of the functions of a full-size receiver into a smaller chassis. This is a unit that can work with a large system but is also good for smaller living spaces where a larger component system is simply too much for the budget to support.

Bismarck, post: 768834
Since the receiver is so lightweight I wonder if it is using a class A/B amp or a switching amp? Either way, power hasn't been a big issue for me.

I'm sure the Samsung uses a switching power supply feeding some derivitive of Class D amplification.
Bismarck posts on November 25, 2010 13:06
I have actually setup a number of these receivers and wouldn't give them too glowing of a review. They sound fine for the price, and match other Samsung components well. The lack of transcoding to HDMI is a real concern for me. Also, the lack of an audio return channel (ARC) is annoying for people using an OTA antenna hooked right to their TV.

I have had a number of problems with the receiver dropping audio. For a few clients, I have had to set their blu-ray Players to re-encode the new HD sound formats for the receiver to work properly.

Since the receiver is so lightweight I wonder if it is using a class A/B amp or a switching amp? Either way, power hasn't been a big issue for me.

Still, there is nothing that makes this receiver stand out over the other competition, other than the included iPod dock. The Denon AVR-591, for less money, has ARC, transcoding to HDMI, and a lot more setup features. The crossover on the Denon isn't global, you can set an volume limit so our kids don't crank it up too loud, and you can set a power on volume level. I am not a Denon fanboy, but their receiver at this price point is much better in my opinion.
3db posts on November 25, 2010 12:09

M Code, post: 768810
Nope..
Reason is lack of interoperability with other HDMI components..

What? With all them standards kicking around and you still have interoperability issues? Who'd a thunk it?
M Code posts on November 25, 2010 11:08

Nope..
Reason is lack of interoperability with other HDMI components..