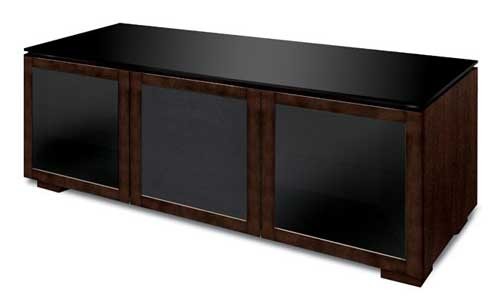 *Shelves are 3-position adjustable Up or Down in 1" increments, height measurements are in Center position

The Bell'O PR-12 is a beautiful piece of AV furniture. While it doesn't allow the unlimited access or center channel provision some of the hardcore enthusiasts would like, for many people it has everything they need. The floating sheet of glass hovering above the cabinet gives it a very chic and cosmopolitan look. The floating glass top will support up to a 175 lbs and has the width to easily support a 65” TV and probably up to a 70” if you don't mind the edges hanging over a little. The lower shelves have a 50 lb rating each and with 7 lower shelves with which to divide and hold your electronics, finding a home for all of it should not be an issue.
Next Page ⇨

Clint DeBoer, post: 798441
That's crazy… It seems like the shipping methods are not all that ironed out , which is odd for furniture that's not terribly cheap to begin with.

Well, what's worse – I just received a second shipment from a second vendor and selected “white glove” delivery. They walked it in and unpacked it. Looked fine, aside from two small issues – or so I thought. The first was some of the rubber insulating holding the glass and the wood on the left door was loose. Upon closer inspection the reason why it was loose is because the door has a nice long crack inside it running along the top of the glass. The other “minor” issue – the stabilizing leg underneath the cabinet was loose and came off…why? Because the bottom of the cabinet apparently had rotted partially and the leg cannot be reattached or glued.

Which means I can't and won't put anything in or on it, not with it wobbly enough to seem stable but obviously be anything but. I can't imagine killing a $2000 receiver or a $1500 TV because this IKEA-grade crap is ready to go poof a second time.

Next…the back left corner of the unit has a nice big crack in it – just enough to barely be visible unless you're looking really carefully. The kind of crack that won't matter much until you try and move the unit, at which time the entire back piece will crack off.

I'm getting pretty fed up. Time to call Bell'o and see what they can do to save me from contacting my credit card company, the BBB and the Attorney General's office.

And Horizon.
Pyrrho posts on March 07, 2011 13:49
I find it strange that people buy such pieces of furniture, when they seem so poorly suited for the purported purpose. It seems only natural that a large TV would go with a large center speaker (because both are likely to be desired in a large room), so there should be room for one.

I personally use a stand that is like a wall mount, but is a stand, and the height is something that is variable in the setup (though not easy to change after one puts it together), below which are three glass shelves. I put a bookshelf speaker on the top shelf, vertically, just like my right and left speakers, and at approximately the same height. I have the TV mounted such that it barely clears the center speaker. Mine was cheap (less than $200 delivered; it is an off-brand thing I bought online several years ago), and can accommodate a very large center channel speaker. Mine is made of steel with glass shelves (the shelves are irrelevant to the structure, which is all steel), with no wood (though I personally rather like wood, if it is real solid wood, and not particleboard).

(My audio components are on another stand, as there is not enough room on the TV stand for them all, and I don't like components practically on the floor, where it is inconvenient to load BDs and such.)

I guess Bell'O is selling to people who do not care much about the sound quality of their systems.
Clint DeBoer posts on March 07, 2011 11:33
That's crazy… It seems like the shipping methods are not all that ironed out , which is odd for furniture that's not terribly cheap to begin with.
BoogieNYC posts on March 06, 2011 19:16
Hope Third Time's The Charm

I bought a 46" Samsung a few months ago and finally purchased the Bello PR-12 to allow me to house all my components in tandem with the TV and I bought the cabinet based, in part, on this review. I ordered it from Amazon.com and requested courier delivery but, somehow, they sent it UPS. Being that the box weighed 110 lbs, UPS rejected it and sent it back to Amazon. So I contacted Amazon and requested they do it right the second time around and send it via courier.

They sent it out the next day – by UPS.

It arrived a day late (Friday) and the box looked about as damaged as the box in the photos contained here. But I hoped for little, if any, damage. I figured a small cosmetic blemish would be a non-issue and be the lesser of two evils (compared to having my equipment scattered all over my apartment).

Sure enough, I managed to open the box and the two front corners were damaged. So damaged, in fact, that the hinges were separated from the body and there were shards of espresso-colored wood-esque material all over the floor as I tore the box back.

After getting past the irritation, I called Bell'o and they told me to call Amazon regarding freight damage, which I did. I spoke to a supervisor (after about 20 minutes) and they told me to return the piece. I told them the box was ripped and torn up and the cabinet itself wouldn't even survive the trip. I was put on hold and when the supervisor returned to the line she told me to discard the cabinet – after I offered to take pictures of all the damage – and they would refund my money. I had two guys who work at my apartment building help me to get the cabinet out of the apartment because it was even more unwieldy with half the packaging around it.

When we tried to move it, it basically disintegrated.

Every piece of the cabinet came loose. The two glass doors, the front speaker-grille door, the top glass piece, the back, the bottom, everything.

It took about an hour or 90 minutes for us to collect all the pieces and get it into a wheeled garbage cart and out to the garbage area.

I ordered another unit from a local NYC carrier – by COURIER – and I am hoping the end result is better this third time around. I liked the color of the cabinet (it's not a shiny marbled color like the site shows) and it seems well built (if it's not abused by UPS). I still don't know if the center fabric-covered area is remote-friendly, but regardless, I think it seems well made and heavy, so I am just hoping it survives delivery and my eventual move (should be within a year). But the whole process is very disconcerting.

I also looked into Salamander and the Horizon N572 but for the money, this cabinet seems pretty solid. And down the line I'll mount the TV on the wall (in the mean time, it will sit on top of the unit). Everything seems really good about this product, so I'm hoping anyone reading this will avoid buying this type of cabinet from Amazon unless they ship via courier. They handled this situation as well as can be expected (except for the shipment) and I will buy from them again, but be careful when ordering something of this size from them and be diligent about the shipment and inspection of the receivables before signing anything.
Post Reply