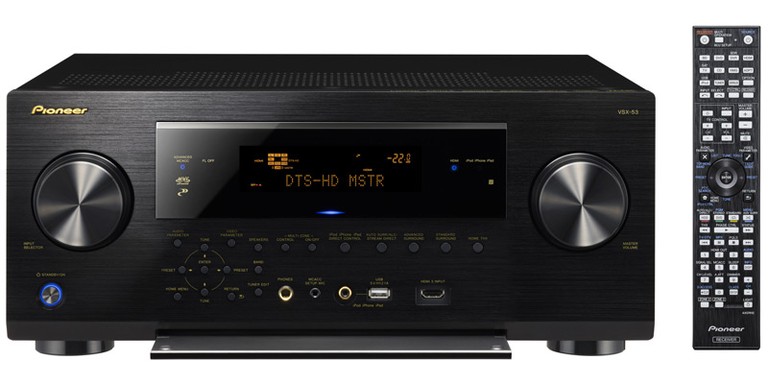 Pioneer was really one of the first manufacturers to try to give iDevice users what they wanted for ease of use and connectivity. While others were requiring the purchase of external docks or calling a 3.5mm jack "iPod ready," they were offering out-of-the-box integration with an included cable. When Pioneer announced their new line of Elite receivers, we were sure There would be some sort of Apple included. We weren't disappointed. The VSX-53 has seven 3D ready HDMI version 1.4a inputs (one front-mounted) and two outputs that support Audio Return Channel. It has two component video and three optical and two coaxial digital audio inputs. There are nine sets of speaker terminals for accommodating not only the seven channels of amplification (at 110 watts per channel) but also multiple configurations. Zone 2 has pre-outs as well as a composite video output. Zone 3 is supported, but audio only. The VSX-53 has pre-outs for 7.2 channels (the specs say 7.1 but we see two subwoofers outputs on the back) plus an extra set for integration of front height/width channels (for Dolby ProLogic IIz and Pioneer's own proprietary processing).

The front of the unit has, along with the HDMI input, a USB port paired with a composite video input. This is for native integration of all the iDevices including iPad (supported devices include 4th gen Nano and above / iPhone, 3G, 3GS, 4 / iPad, iPad2). You can use this connection (and the included cable) for iTunes movie/TV/video playback or to video album/cover art. It also works for Android playback via the USB connection (no cable supplied for this one). If you want to stream off a flash drive, the USB port is compatible with WAV, MP3, WMA, iPod Digital, and JPEG formats.

At this price point, you'd expect some advanced features and you won't be disappointed. Apple's new AirPlay is on board which allows you to stream your iTunes library from your handheld iDevice or from a Mac or PC running iTunes. You can even stream this content to Zone 2. Of course, you'll need to network your receiver via the Ethernet port which gives you access to a host of additional features. The VSX-53 is DLNA 1.5 certified for streaming LPCM, WAV 192kHz, MP3, ACC, WMA, and FLAC 192kHz files from compatible networked devices. You'll also have access to vTuner (for Internet Radio), Rhapsody, Sirius, and Pandora. With your compatible iDevice (and a free app), you can access Pioneer's Air Jam. This allows up to four Apple devices to pair via Bluetooth to stream music and create a group playlist. If you like any of the songs on the playlist that you don't own, you can mark it for later purchase. Of course, Pioneer has a control app for the VSX-53 available for free download for your iPhone/iPad/Android devices. Lastly, Pioneer has integrated AVNavigator, an interactive owner's manual that allows your networked PC to communicate directly with the receiver to walk you through set-up step by step.

Network and control features aside, the VSX-53 looks to be a pretty robust receiver. At 30.65 pounds, it may not be the heaviest receiver you come across but it surely isn't the lightest. The THX Select2+ certified VSX-53 has 110 watts per channel measured 20Hz-20kHz @ 8-ohms with amplifiers that utilize an "Advanced Direct Energy" design. The Advanced version of Pioneer's MCACC is on board as well as manual control of the room correction system. The seemingly ever popular Marvell Qdeo video scaler is on board to upconvert all your video sources to HDMI and up to 1080p / 24fps. There is a GUI for interacting with your receiver if you don't have an iDevice.

While there is a ton to like about the VSX-53, the differences over the $900 VSX-52 seem pretty minimal. An extra HDMI output (could be very important to you based on your needs, or could be completely unneeded) and an extra zone of audio (again, need-specific). We expected lots of Apple and networking support and we weren't disappointed. We're interested to see how this interactive user's manual works for helping people set up their new receiver. With all the features that are now being shoved into receivers, we're sure new users will need all the help they can get. The real question is how it will hold up to the competition.

The new line of Elite AV receiver models will be available in the summer of 2011.

New Elite Receivers – At a Glance

After many hours of trying various high end recievers, I finally chose, Pioneer Elite VSX-52. Most bang for your buck. I also liked Marantz, and Arcam, but they're twice the price. It has enough power, and an amp that will drive my Martin Logan ESL speakers, REL T2 subwoofer, and Energy V5.1 monitor speakers. I'll add a V5.2C center channel, and be done. I have a Pioneer Elite 50 inch TV now, but I'll probably get a Samsung OLED if they work better than a plasma? Also, I'll replace my Pioneer Elite BDP-41FD, with an Oppo 93, blu-ray player. Anyway, the 52 with the Cox Cable, Cisco DVR, makes a wonderful audio/video home theatre experience.
b_pustai posts on November 24, 2011 23:12
Pioneer Elite VSX 53

b_pustai, post: 843430
all my stuff is hdmi 1.3a will they work. can this unit bi amp, and how does one receiver hook up to the other receiver,I know how the speakers hook up but not the receivers. I need help. your friend butch. Would the Pioneer SC 55 be a much better unit for bi amping. Can both units up scale the video from the pc to 1080p .

all my stuff is hdmi 1.3a will they work. can this unit bi amp, and how does one receiver hook up to the other receiver,I know how the speakers hook up but not the receivers. I need help. your friend butch.
love2drive335 posts on June 22, 2011 08:26
When is this receiver expected to be available?
Post Reply