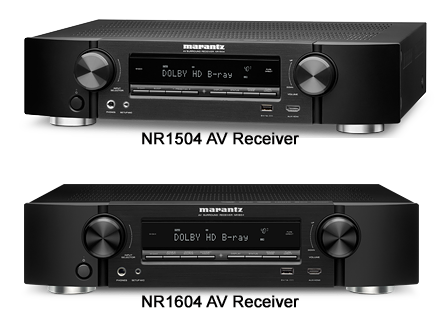 There are all types of people with AV needs out there. And just because something is important to one person, doesn't mean it will be important to everyone. Case in point - with the rash of flat-packed furniture that has made its way into people's homes, too often they are making purchasing decisions based on looks alone. Most don't even take into account the size of their TV much less where they are going to put the speakers or, gasp, receiver. So they are left with a pretty piece of furniture with absolutely no space for a full sized receiver.

Marantz has long heard this call with their NR line of receivers. The NR line are called Slim Line for a reason (why the model designation isn't SL beats us) - they are about 1/2 the height of a normal receiver. This makes them much more versatile in there placement options. We like to recommend them not only for people that haven't had the proper foresight when making furniture purchases, but for those that are looking for a bedroom or second, smaller, home theater receiver.

The Marantz NR1504 has five way binding posts for all five channels, five HDMI inputs on the back and one on the front, and one HDMI output. There is a front mounted USB port for accessing a portable drive or phone. If you use it with an iDevice, the NR1504 will bypass the internal DACs of the iDevice in favor of its own. The HDMI output is version 1.4 and supports 3D pass-through, Audio Return Channel, Deep Color, standby pass thru, and HDMI-CEC. There are three composite video inputs and one output (monitor only - no analogue to HDMI upconversion). The NR1504 has three pairs of RCA-style analogue audio inputs and one coaxial and one optical digital audio inputs. There are pre-outs for the main channels for adding an external amplifier but no support for a second zone of audio.

The Marantz NR1504 had an HDMI overlay GUI and a built-in Easy Setup Assistant for first time users. There is an Ethernet port on the back for connection to your router. The NR1504 is DLNA certified and can stream Internet radio as well as SiriusXM Internet Radio, Pandora, and Spotify. Apple's AirPlay is supported as well, giving those with iDevices an easy way to send their content to their home theater. Marantz's remote app for iOS and Android allows you to use your portable device as a Wi-Fi remote.

Marantz has long stood for audio quality and they are not skimping on the NR1504. They've included Audyssey's MultEQ room correction and speaker setup. This allows for up to six measurement locations for the best possible sound. For those that have compressed all their music to MP3, Marantz has added their M-DAX (Marantz Dynamic Audio eXpander) for better sound from MP3s and other digital music files. Lastly, the NR1504 features 192kHz/24-bit digital-to-analog converters for all channels and a direct mode which switches off unnecessary circuitry to provide cleaner sound. The most impressive part of the NR1504 is the price. AT $499, Marantz has shoved a ton of features into the tiny chassis.

The NR1604 takes what the NR1504 started and brings it to the next level. First, they've added another HDMI input on the back as well as two additional channels of amplification (the NR1604 is a 7.1 channel receiver). They haven't upped the power, however, keeping it as 50 watts per channel. This has increased the weight only up to 18.5 pounds (half a pound heavier than the NR1504). The size of the chassis is the same.

Marantz has added two additional pairs of 5-way binding posts to accommodate the additional channels of amplification. These channels can be routed to a second zone of audio leaving 5.1 channels for the main home theater. Only analogue audio inputs can be sent to the second audio zone, however. Marantz has also added pre-outs for the Zone 2 for those that would prefer to use an external amplifier.

In addition to the extra HDMI input, Marantz has included two component video inputs and one output for those with legacy gear. It has also included video upconversion from analogue to HDMI for a true one-cable connection to your display. Scaling has been added as well up to 4k for the display you can't buy yet or 1080p for the one you already own. With an increase of $150 over the NR1504, the NR1604 adds a ton of features that not only look good on paper, but that you'll actually use.

We've long been fans of the Marantz NR line, and the new NR1504 and NR1604 have done nothing to change that. Sporting high end audio components, discrete amplification, Apple AirPlay, Audyssey MultEQ, and much, much more, there is a lot to like. At a starting price of $500, the NR line isn't going to break the bank either. With a low profile design, potential customers don't have to sacrifice audio quality, features, and style just because they have limited space.

Read the Complete Thread
honeymonster posts on April 18, 2013 10:28
Aesthetics are important in my family as well as performance so this is a strong contender. The slim profile of the Marantz NR1504 is a deal maker for me, as I have no space for a full height av receiver, and SWMBO would not allow it anyway!
j_garcia posts on April 08, 2013 15:10

pmcl77, post: 962431
And how are you shutting them down? Is there a setting for that on your model? Just wondering if the newer 1603/1604 Models offer that too, or if they are being “shut down” automatically if no speakers are connected to its speaker posts (and instead are hooked up to a connected external amp like you say)?

He is just turning them off in speaker options, that is not technically “shutting them down”, simply not using them. This is no different than not connecting speakers to them, however on the processing side it also reroutes the sound so you aren't missing any of the sound that would have gone to the surrounds. Pretty much every receiver on the market should be capable of this.

snowhiteboiler, post: 962473
OK, so I'm definitely interested in either the 1504 or 1403 of this line, especially because of the pre-outs. I have an external amp that powers a set of outdoor speakers - I don't need a second source/zone, just wanted to be able to run the same audio from say the appletv or pandora inside and outside. Will one of these be a good option? Thanks everyone for your input.

IMO, you would still want a zone 2, otherwise the audio would ONLY be going to the outside speakers all the time. Although I am not sure if this receiver leaves the main channels powered simultaneously, though I would presume it does.
snowhiteboiler posts on April 08, 2013 12:42
OK, so I'm definitely interested in either the 1504 or 1403 of this line, especially because of the pre-outs. I have an external amp that powers a set of outdoor speakers - I don't need a second source/zone, just wanted to be able to run the same audio from say the appletv or pandora inside and outside. Will one of these be a good option? Thanks everyone for your input.
pmcl77 posts on April 08, 2013 05:26

Samu23el, post: 962414
I think the fact that they have preouts only for the mains is a limitation for a larger audience.

Yes, but like someone said, that audience is likely to buy bigger AVRs, or at least that's what the manufacturer wants them to do

I wonder why there's no slim-line AV preamp in that form factor… they should design an “entry level” preamp in that size to use with external multichannel power amps. I think there would still be enough space on the back for more connectivity since the speaker posts would be gone.
pmcl77 posts on April 08, 2013 05:23

And how are you shutting them down? Is there a setting for that on your model? Just wondering if the newer 1603/1604 Models offer that too, or if they are being “shut down” automatically if no speakers are connected to its speaker posts (and instead are hooked up to a connected external amp like you say)?
Post Reply