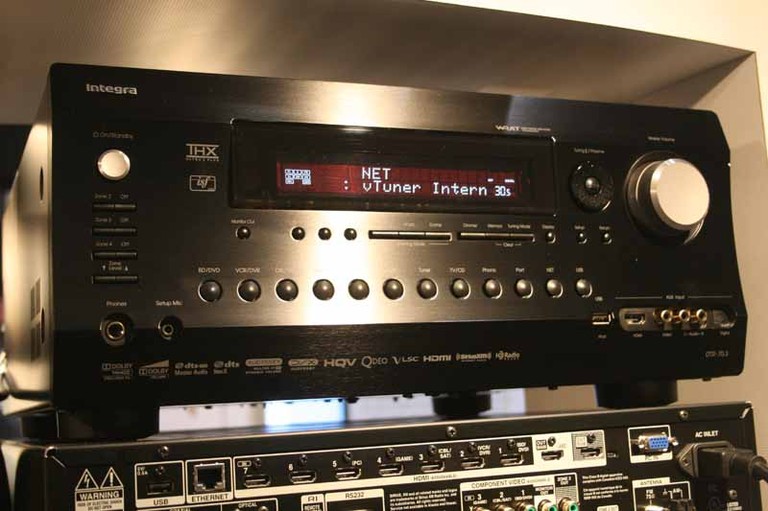 Frankly, we weren't going to write about the Integra DTR-70.3 receiver. We already wrote about the DTR-80.3 which is the new flagship of the Integra line and the DHC-80.3 processor which is the same thing except for a lack of amps and the addition of XLR outputs. What could the DTR-70.3 have to offer other than less features for less money? Certainly if you are value shopping that makes a difference, but as far as "news" goes, it isn't very exciting.

But then we took a closer look.

The DTR-70.3 is a cool $700 cheaper than its flagship big brother, so surely a lot of features have been dropped, right? Wrong. We looked over the specs and, depending on who you listen to, the DTR-70.3 loses about 5 or 10 watts per channel. We expected them to lose two channels of amplification (down to 7 from 9) but that doesn't seem to be the case. The DTR-70.3 still gets the Marvell Qdeo 4k processing plus the new IDT HQV Video VHD1900 scaling with ISFccc calibration like its more expensive brother. It is still THX Ultra2+ certified and sports the latest Audyssey MultEQ XT32 room correction with Sub EQ HT (for independently calibrating both subwoofer outputs) and the brand new DTS Neo:X processing. In fact, as far as features are concerned, the DTR-70.3 really has everything the DTR-80.3 has. But something had to go, right? It is $700 cheaper. So we looked at the back: See, to us, that looks awful similar to the DTR-80.3. The first thing we noticed was that the Integra DTR-70.3 doesn't have the cool, clear, five-way binding posts, but instead the standard black and red ones. That's worth a couple hundred, right? No? Okay, we'll keep looking. It still has 11 pairs of speaker terminals and 9.2 channel analogue outputs for easy configuration switching and adding amps. It still has 7.1 channel analogue inputs for legacy gear. It has subwoofer outs with stereo pre-outs for both the additional zones and Zone 2 can still get video from a composite or a component output. There are seven HDMI 1.4a inputs on the back (one on the front) and two outputs that are ARC, 3D, and Standby Pass-thru capable. All the same inputs and outputs are available including a PC in, RS-232, Ethernet, USB (front and rear), IR, and 12 volt triggers. In fact, aside from the binding post color change, the lack of one (count'em) digital optical input, and the little model number, you can't tell these two receivers apart physically.

All the same networking is on-board including Pandora, Rhapsody, SIRIUS Internet Radio, Napster, Mediafly, Slacker, and vTuner. The DTR-70.3 is Windows 7 and DLNA certified for streaming on your local network. If you have an iDevice, you can connect it to the front USB port for a direct digital connection with album art - just like the DTR-80.3. All the same processing and DSP modes are present plus all the same custom installer features. Both have iDevice and Android apps for control. So what's different? Where is that $700 savings coming from?

We're betting there are quite a few of you that would gladly pocket that $700 (or better yet, buy an external amp with it) considering all the rest of the features are the same. In fact, the only feature that is really missing from all these new high-end Integra offerings is Apple AirPlay. With the savings on the DTR-70.3 over its larger brother, you can easily afford an AppleTV with plenty to spare.

It's not hard to see why the Integra DTR-70.3 is destined to become Integra's new best-selling receiver. With its feature set and price, there is a lot to like. If you have to have the top of the line offering from Integra, the DTR-80.3 isn't a bad receiver. If you are planning on using the internal amps and you have some finicky speakers (or ears), the extra $700 may make sense for you. For the rest of us, the DTR-70.3's savings is just too good to pass up.