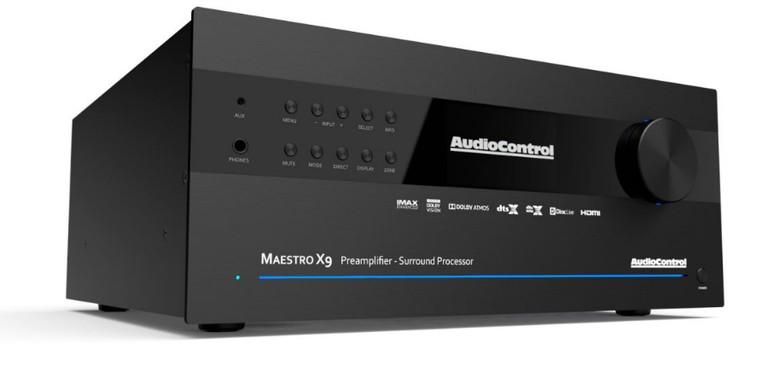 Any bit of good news is certainly welcome these days, so I was glad to hear that the Seattle-based A/V specialist AudioControl is now shipping its new X Series Concert A/V receivers and X Series Maestro preamp/processors. The company first introduced the trio of new receivers, along with the pair of high-end pre/pros, at the 2019 CEDIA Expo last September, where Audioholics founder Gene DellaSala was on the show floor to do a deep-diving video overview with AudioControl’s Chris Kane. Gene was impressed with the flexible bass management capabilities of the Maestro Series processors and Concert Series AVRs, which feature up to 16 channels of processing, and represent “the next generation of ultimate performance,” according to AudioControl. The components were originally slated to become available toward the end of 2019, but short delays grew longer as the coronavirus crisis presented considerable obstacles to pretty much every aspect of daily life. The team at AudioControl persevered though, and the new products are now available for purchase through the brand’s dealer network. The X Series includes the Concert XR-8 receiver ($6,600), the Concert XR-6 receiver ($4,600), the Concert XR-4 receiver ($3,600), the Maestro X7 preamp/processor ($6,600), and the flagship Maestro X9 preamp/processor ($9,600). AudioControl says that all five products “share a stunning industrial design along with the most advanced technologies available, painstakingly engineered to be the ideal foundation of any premium home cinema.”

All three of the new Concert Series AVRs feature Dirac room correction and support for Dolby Atmos, DTS:X, and the IMAX Enhanced standard. The Concert XR-6 and Concert XR-8 add AURO 3D to the mix. The Concert XR-8 provides 7 channels of power via high-current class H amplifiers rated to deliver 120 watts per channel into 8 ohms and 200 watts per channel at 4 ohms, with all channels driven. The 16-channel preamp outputs (on unbalanced RCAs) allow the user to connect additional amps to create a more immersive experience in a 9.1.6 configuration. The Concert XR-6 also features 16-channel processing and preamp outputs, with 7 channels of onboard class AB power, rated at 100 watts per channel into 8 or 4 ohms. The Concert XR-4 has 12-channel processing and preamp outputs, with 7 channels of class AB power rated at 65 watts per channel into 8 or 4 ohms. (Unlike some other brands, AudioControl specifies real-world power ratings with all channels driven, so don’t be discouraged by the modest-sounding numbers.) Each unit has multiple user-configurable outputs, which can be set up for high-pass channels, additional subwoofers, or height channels, depending on the requirements of the system. The Concert series AVRs all utilize ESS DAC chips (the ES9026PRO Sabre, to be exact), which promise audiophile performance and 124 dB of dynamic range from the DAC section. Other features include Apple AirPlay 2, Google Chromecast, aptX Bluetooth, and Wi-Fi streaming connectivity.

AudioControl has a 40-plus-year history of creating award-winning Made in USA products for integrators and backing them up with superior customer service, as well as a 5-year warranty. Engineered and manufactured in the Pacific Northwest, these newly unveiled theater processors (and) receivers… are prime examples of best-in-class, innovative product designs from AudioControl.

Moving up to the Maestro Series preamp/processors allows for increased flexibility and “new levels of precision, power, and control,” according to AudioControl. Both offer 16-channel balanced (XLR) and unbalanced (RCA) outputs, for 9.1.6 setups that deliver the best possible experience for Dolby Atmos, Auro 3D, DTS:X, and IMAX Enhanced content. Both models offer 7 HDMI 2.0b inputs that fully support 4K UHD and HDR playback (including Dolby Vision), and dual HDMI outputs with eARC support. Like the Concert Series AVRs, the Maestro X7 preamp/processor uses the ESS ES9026PRO Sabre DAC, while the flagship Maestro X9 utilizes the top-of-the-line ES9038PRO chip, with an incredible 140 dB of dynamic range (at least on paper).

As a result of the upgraded DAC chip (and, most likely, upgraded analog circuitry), the Maestro X9 offers a higher overall signal-to-noise ratio than its less expensive sibling. Both units offer easy-to-use app-based control for the home user, and an intuitive web-based configuration tool for integrators/installers, who can take advantage of the provided control drivers for popular smart home platforms including Control4, Crestron, and Elan. Of course, AudioControl would like to point out that all of this tech is “wrapped quite elegantly within a completely new industrial design, distinguishing AudioControl’s home cinema preamp/processor lineup from any other solution.”

In the context of a global pandemic, the arrival of some new high-end home theater components might seem insignificant to some, but I think it’s great that the folks at AudioControl have managed to reach their goals and deliver exciting new products that many (deep-pocketed) enthusiasts can enjoy while quarantined at home. It never hurts to have something to look forward to, and I hope that others in the audio industry continue to make progress and keep their companies afloat during these uncertain times.