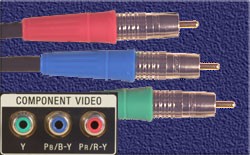 What Works, Why, and the Myth of "Quad-Shield" Cables

Brought to you by Blue Jeans Cable

All common video signal types--composite, RF, s-video, component, SDI, and the various flavors of RGB--are ordinarily run in coaxial cables, or, as the shorthand term goes, "coax." The features of coax which make it ideal for handling these multiple signal types are its excellent impedance tolerance and its shielding; here, we'll discuss what shielding is, why it's needed, and what the best types of shields for video cable are.

The concept of shielding is often confused with the concept of insulation, and these are easy ideas to mix up. To put it simply, the difference between shielding and insulation is that insulation protects a conductor from making direct, physical electrical contact with other conductors, but provides no protection against electrical or magnetic fields, which pass right through all common insulation materials. Shielding, on the other hand, is composed of conductive materials, so is vulnerable to direct physical contact with other conductors unless adequately insulated, but provides protection against those electrical and magnetic fields. If we run wire in a plastic conduit, the conduit provides some insulation, but no shielding; while if we run it through a metal conduit, the conduit provides some shielding, but no insulation. We're sometimes asked whether a PVC jacket around a bundle of cables, or a nylon cable wrap like techflex, provide any shielding benefit--the answer is a very definite "no," as electrical and magnetic fields pass through those insulating materials as though they weren't even there. A good cable needs both shielding and insulation, but no amount of shielding can substitute for insulation, or vice versa.

A shield on a coaxial cable acts by intercepting electromagnetic energy which it encounters, and shunting that energy to ground, preventing it from reaching the center conductor of the coax where the signal travels. To do this effectively, a shield needs three things: (1) high coverage, so that energy cannot readily pass through holes in the shield, (2) good conductivity, so that energy, once it enters the shield, will find its easiest path to ground; and (3) good connection to ground at the ends of the cable.

Foil offers the obvious advantage of complete coverage; it is a very easy matter to apply foil to a cable in such a way as to cover every last bit of the dielectric, and by binding the foil to tape (usually mylar), one can make sure that the foil will endure flexing without significant damage. But foil fails as a good shield on the two other counts; it offers rather high resistance, so doesn't provide the best path to ground, and it is not easy to reliably attach to connectors, so the connection to ground at each end of the cable is compromised in a foil-only shield.

Braid cannot provide the 100% coverage of foil; when one weaves wire into a braid, inevitably there are holes. When the cable is flexed, these holes open up wider. The larger the holes, the less effective the shield, and the best braids offer only about 95% coverage. But braid does have advantages in precisely the areas where foil is lacking: conductivity and connectorization. The mass of a braid is much higher than any foil shield, and its conductivity is therefore better; and the sheath of braided wires makes an ideal material to attach a connector to, whether by soldering or crimping, and will endure flexing at the connection point much better than foil can.

Cables come in a variety of shield configurations, and there is a lot of misinformation surrounding the effectiveness of these configurations. In particular, it is widely assumed that "quad-shield" CATV coax, on account of its four layers of shielding as against only one, two or three on other cables, is better-shielded than those other cables. That, however, as we will see, depends on just how those others are shielded; the best shielding available is not quad-shield.

Braid coverage on shields is highly variable. Some coaxes have just enough braid to aid connectorization--say, 60% coverage (for example, Belden 9116, an economy CATV distribution coax). Quad-shield has two layers of braid, but these are ordinarily only 40% and 60% coverage braids (Belden 7916A, for example), yielding a net coverage of 76%. To make matters worse, these thin shields are usually made up of aluminum--cheaper by the foot than copper, which is important if you're wiring a whole city with cable TV service, but significantly less conductive; compare DC resistance of 2.8 ohms/thousand feet (Belden 1694A) versus 4.8 ohms/thousand for quad-shield, versus 9.0 ohms for the single aluminum braid/foil combination of 9116. To make matters still a bit worse...the center conductors of most (though not all) quad-shield cables are copper-coated steel rather than solid copper, and consequently are not well-suited for any application other than the CATV distribution for which they were designed.

Precision video coaxes on the market today generally consist of two or three layers of shielding, depending upon how one counts the foil; the foil is one layer of mylar tape, with one layer of aluminum on each side. On top of that foil is laid a dense copper braid with 95% coverage, and that braid provides high conductivity and excellent contact with the connectors at each end.

So, what's the result of these differences in shielding? Engineers measure the effectiveness of a shield by what is termed "transfer impedance," which indicates the extent to which a signal outside of the cable reaches the inside. Transfer impedance is a function of frequency, so to gauge the relative effectiveness of shields, one has to know what the frequency band in question is, but at all frequencies, a precision video cable with a 95% braid and foil outperforms quad shield cable. The following table is taken (with permission of the author) from the Audio/Video Cable Installer's Pocket Guide, McGraw-Hill 2002, by Stephen Lampen, an engineer with Belden Wire and Cable. It shows the transfer impedance for various shield configurations on RG-6 type cables at various frequencies; the lower the number, the better.

As can be seen, at baseband video frequencies (applicable to component video, composite video, s-video, and rgb, and represented here by the range of 5, 10 and 50 MHz), the precision video cable with 95% copper braid outperforms quad shielded cable by about 2 to 1. As we move into the higher RF range (ironically, the very range for which quad-shield is primarily used), the performance gap widens substantially, with the precision video cable outperforming quad shield at 10 to 1 at 500 MHz.

How important is this? It depends on the application, of course, and particularly on the noise levels in the environment. We've seen the use of high-density braid-and-foil shielding clean up some nasty RFI problems in home CATV distribution, turning a cable signal that was nearly unwatchable due to multipath problems (off-air signals entering the cable through the shield) into clean and clear reception, the difference being dramatic and unmistakable; in most applications, RF isn't such a vexing problem, and the degree of importance will vary.

But the effectiveness of a single heavy copper braid and two-layered foil over conventional CATV coax, quad-shielded or not, is superior across the board.

As cable runs become longer, with home video distribution, runs to projectors, and the like, that superiority becomes more and more significant in keeping RFI out of your system.