We're often asked questions about the suitability of particular cables or speaker wires for in-wall installation, and it's not surprising; with surround speakers being wired all around home theater rooms, ceiling-mounted projectors being located across the room from their video sources, and video and audio being distributed all over the home, it's natural that people want a clean installation, with all of that cable being tucked inside of walls and ceilings, rather than running in surface-mount raceways or just dangling out in the open. Because it's not always easy to figure out what cables are or are not rated for a particular installation, we've prepared this summary of the rating requirements for in-wall and other specific installation problems in the home.

Most jurisdictions which have an electrical code use the National Electrical Code, published by the National Fire Protection Association. The NEC is quite a large and confusing document, running over six hundred pages long, which details the code requirements for a huge variety of electrical installations. Most of NEC, of course, is devoted to electrical power wiring, but installations of other wiring are covered as well. It's well to remember that NEC is primarily concerned with "installation" of wiring; while the NEC never actually defines the term "install," it's fair to say that as a general rule NEC doesn't encompass such things as an interconnect running from one device to another on a rack, but is concerned with wiring which is in some way integrated into a structure, the installation of which will require construction permits.

The main purpose of NEC is to prevent hazards to human health and safety from wiring, and these fall primarily in a few categories: electrical shock, tendency to start or perpetuate a fire, and production of toxic fumes when exposed to fire. To classify the types of cables suitable for reducing these risks in various applications, the NEC provides a system of ratings of cables. An example would be CL3, or "Class 3," which many people recognize as an "in-wall" rating because of the labeling on the spools of speaker wire found at home improvement stores. But there are many more ratings, and almost all of them also are "in-wall" ratings for NEC purposes, as we'll see.

NEC lists a variety of special applications for wiring, and home theater isn't among them. However, a couple of NEC chapters do bear on home theater: Article 640, "Audio Signal Processing, Amplification, and Reproduction Equipment," and Article 820, "Community Antenna Television and Radio Distribution Systems." Article 820 is a bit of an odd fit, in that the drafters of NEC obviously had in mind the distribution of externally-generated cable TV signals around a home rather than the distribution of internally-generated RF or baseband video signals; however, of all of the NEC Articles, it's the closest fit and is therefore the Article upon which your local inspector is most likely to rely in evaluating your code compliance with regard to installed video cabling.

Before we delve into these specific NEC Articles, it's also a good idea to know a bit about "plenum" and "riser" ratings, which are indicated on an NEC rating by attaching a "P" or "R" to the end (e.g., CL3P is "Class 3, Plenum"). The NEC provides particular requirements for certain cable locations because of their special potential to facilitate the spread of fire or fumes. A "plenum," under Article 100 of NEC, is "a compartment or chamber to which one or more air ducts are connected and that forms part of the air distribution system." The most common "plenum" space one sees in a/v installations is a dropped ceiling space in a commercial building, being used as a ventilation return. Most residences do not have any significant plenum spaces, so this is rarely a consideration in a residential installation--but on occasion it can be. Plenum cables are required to have jackets and dielectrics which don't easily give off toxic fumes when burned--the reason being that a fire in one part of the building can, through the ventilation system, feed toxic fumes to the entire building. A "riser" is a term never specifically defined in NEC, but basically, one must consult the "riser" requirements whenever cable will penetrate from one floor of a building to another. As we'll see, though, all risers do not necessarily require riser-rated cable.

Audio interconnect cables and speaker wires fall under Article 640, and so whether they can be installed in-wall or in other specific settings will depend on that article. Under NEC 640.21(C), these are in turn governed by Article 725, "Class 1, Class 2, and Class 3 Remote-Control, Signaling, and Power-Limited Circuits."

General installation of wiring, including installation inside of walls, is governed by 725.61(E), the principal features of which, for our purposes, are:

So, if a cable isn't marked CL2 or CL3, is it suitable for in-wall installation? It may be. The NEC allows cable of a higher rating to be substituted for a lower rating, and therefore, any of the following may be used: CM, CMP, CMR, CMG, CL2R, CL3R, CL2P, CL3P, PLTC. CMX also may be used where CL2X or CL3X is required.

A riser presents a bit different situation, governed by 725.61(B). If you're in a single or two-family dwelling, CL2, CL3, CL2X and CL3X may be used (and, of course, any of the substitutions listed above). In a commercial building or multifamily dwelling, any of those cables are permitted if they are installed in metal raceways or located in a fireproof shaft having firestops at each floor. In a commercial or multifamily building, without a raceway or shaft, if the vertical run of the cable penetrates more than one floor, CL2R or CL3R must be used (or any of these substitutes: CMR, CMP, CL2P, or CL3P). 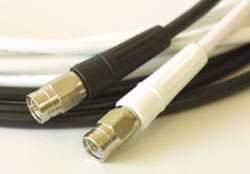 Under Article 820, a similar set of restrictions applies to video cables.

Normal installation conditions, including in-wall (non-plenum, non-riser): CATV may be used; CATVX may be used if the building is a single or two-family dwelling or if the cable is enclosed in a raceway. For CATV or CATVX, any of the following may be substituted: CM, CMG, CMR, CMP, CATVR, CATVP. See NEC 820.53(D).

In a plenum, cable must be rated CATVP; CMP, being a higher rating, is a permitted substitution, see NEC 820.53(A).

Riser requirements are governed by NEC 820.53(B). In one or two family dwellings, CATV or CATVX may be used (or any of these higher-rated substitutions: CM, CMG, CMR, CMP, CATVR, CATVP). In a commercial building or multifamily dwelling, any of those cables are permitted if they are installed in metal raceways or located in a fireproof shaft having firestops at each floor. In a commercial or multifamily building, without a raceway or shaft, if the vertical run of the cable penetrates more than one floor, CATVR must be used (or any of these substitutes: CMR, CMP, or CATVP).

Running Signal and Power Together

There are two good reasons not to run signal-carrying cables and power lines in a conduit or other enclosure together. The first is, simply, that it's a great way to get a lot of EMI into your signal chain. The second is, as you've probably guessed by now, that it's against NEC requirements. Video and audio cables may be run in raceways with one another, but NEC prohibits running video in the same "raceway, compartment, outlet box, junction box, or other enclosure[]" with power circuits, NEC 820.52(A)(1)(b), with minor exceptions, and prohibits running audio in the same "cable, cable tray, compartment, enclosure, manhole, outlet box, device box, raceway, or similar fitting" with power circuits, NEC 725.55(A), unless separated by a barrier. Coaxial cable is required to be separated by two inches from power cable, unless either it or the power cable is enclosed in a raceway or they are separated by a "continuous and firmly fixed nonconductor," NEC 820.52(A)(2).

Whew! So, What's All That Mean? 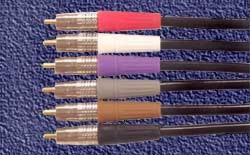 Well, the upshot is that there are a lot of NEC ratings, but we can sum up what the ratings on each of our cables mean, and what the permitted applications are, in the following table. Some of the cables we carry aren't NEC rated, so they're missing from the table below: all of the Canare cables, and Belden 1808A (round s-video cable). That doesn't mean that your local electrical inspector won't allow these to be installed in wall, but it does raise the possibility; all of them are, in practical terms, suited for in-wall use, but if your inspector is a stickler for rated cable, that won't do.

For our other Belden cables, consult the table below for details; but at the outset, note that if your only question is whether a cable is rated for in-wall installation, the answer is that all of the cables below are in-wall rated; the differences have only to do with plenum and riser applications:

Because NEC substitutions can be a bear to figure out, we've prepared a substitution table to help. This table doesn't include every possible NEC rating, but only those you're likely to encounter: