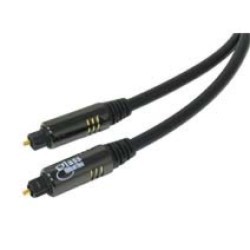 "Any sufficiently advanced technology is indistinguishable from magic."
- Arthur C. Clarke, from Technology and the Future

The transmission of signals using a beam of light was a topic for science fiction writers just a few short decades ago. The ability to harness the incredible speeds and data density capabilities of the optical medium was considered a "holy grail" for communications pioneers, who first began exploring this power of light in 1966. However, it took the digital revolution to bring fiber optic transmission to the mainstream.

In 1980, Philips and Sony jointly proposed the compact disc standard. Part of the standard, now referred to as the "red book" standard, included the ability to transport data in the digital domain between components. In fact, the acronym S/PDIF stands for Sony/Philips Digital Interface. By 1983, when the very first compact disc players started selling in the United States, Toshiba had entered the foray with an optical transmission protocol based on the use of the collimated light.

TOSLINK, or more properly EIAJ optical, signals have exactly the same format as the electrical S/PDIF signals except, instead of using high/low voltages on copper to represent the binary 1's and 0's of digital information, TOSLINK utilizes a series of on/off pulses of a red transmitting light. Contrary to popular belief, there are no lasers used in audio optical digital transmission. The light source is a simple and inexpensive LED. Until recently a major drawback of fiber optic transmission was attenuation within the optical cable. Reliable transmission distances were limited to 10 meters, in actual application the practical limit was often under 5 meters.

For many audiophiles there were often other drawbacks to the TOSLINK interface. Put simply, many listeners found this connection didn't sound "good". During the final decade of the twentieth century many alternatives were offered to the audio community. Sony, with their CDP R-1 ES Reference Player, introduced an optical interface that used two conductors: one for signal and one for clocking data. Parasound and a host of others opted for a different, wider bandwidth optical interface in the form of the AT & T ST glass interface. Many simply used the electrical S/PDIF connection in the form of a coaxial interconnect or balanced AES/EBU 110-ohm interface.

What can make a difference in the sound of digital signal? There are two major areas of concern: jitter (also known as clock phase noise) and data error. Recently the use of improved buffering and local re-clocking (as opposed to clock recovery) of the signal have largely overcome jitter. Ten years ago, however, jitter was the number one gremlin in the digital stew. In short, jitter spread the digital data out over time, smearing or blurring of the sound after the digital-to-analog reconstruction.

An often-overlooked cause of jitter is bandwidth limiting of the digital signal. Quoting from the Rémy Fourré Stereophile article "Jitter and the Digital Interface" published in the October, 1993 issue; " A word about optical links. Still using the example above with digital signals A and B, a low-pass filter at 5MHz-typical of TosLink-causes a time difference of 121ps. A 6MHz low-pass filter causes a time difference of 33ps. For adequate performance, optical links must have a bandwidth of 9MHz minimum. To operate at 48kHz and have a 15% margin for speed adjustments, the interface bandwidth must be at least 11MHz."

The second concern, data error, is easier to understand - data arriving at the D/A converter is either missing or wrong. This would be very detrimental to sound quality and often results in loud popping noises or even muted silence. Data interpolation, the reconstruction of damaged data, would result in less obvious, but similarly compromising, effects on fidelity. Clearly the TOSLINK interface's advantages of immunity to RFI and EMI were not enough to create an inherently superior connection. More needed to be done to the interconnect itself to realize the potential advantages of using light as a signal conductor.

Today the TOSLINK optical interface has reached its sonic performance potential. What changed? There are three factors that draw the line separating mediocrity from excellence: purity of the optical conductor, clarity of the optical termination (lens), and flexibility without signal loss. When each of these parameters is optimized, and the interconnect is used with quality components, the TOSLINK connection is audibly indistinguishable from coaxial S/PDIF.

The optical fiber material itself must be transparent. The quest for this quality is what drove the audio industry to experiment with the AT & T ST connection in the first place. When constructed from very high purity quartz, TOSLINK interconnects can exhibit a very wide bandwidth - 10MHz is not uncommon in practice. Compare this with the performance of a typical plastic conductor fiber optic cable that reaches its limitations at a mere 5MHz to 6MHz. When the signal is multi-channel audio with advanced word-lengths of 24 bits and/or sampling rates over 100KHz, this bandwidth is especially critical. Essentially, any DVD DTS or Dolby EX soundtrack is best served by a wide bandwidth optical digital audio connection

Quality TOSLINK interconnects must also feature a highly polished and properly fitted termination. One metric of proper termination is the numerical aperture. A numerical aperture mismatch occurs when the launching port has a higher NA than the optical cable. Think of this as the light equivalent of proper characteristic impedance. A NA mismatch causes reflections within the TOSLINK port and within the cable assembly. In general terms a smaller numerical aperture on a TOSLINK cable is better than a larger NA.

Refractive index (RI), while important, is not a parameter the consumer can easily define. Refractive index refers to the light conductivity of the core substrate. Air, for instance, has a RI of 1. When two conductors with differing refractive indices are connected within a network, reflections - and the destructive results of those reflections - are possible. Basically, a TOSLINK cable manufactured from a quartz glass will likely have a much closer RI when compared to the source optical module than one made from plastic. Further, TOSLINK interconnects manufactured from quartz typically boast a step index ratio, or stepped refractive distribution. This factor always enables a better mating of the fiber conductor with the optical source.

Quality TOSLINK assemblies should be made from multiple fibers of a very small diameter. Assemblies using fiber diameters greater than 200 micrometers, or single fiber assemblies as seen on many plastic fiber interconnects, will suffer from much greater signal attenuation and reflection than will multi-fiber assemblies. This occurs from bending the conductor. A facet of optical transmission generally unmentioned in product literature is the degradation of performance due to even mild bending of the interconnect assembly!

Two final manufacturing parameters, which are almost never discussed outside of mil-spec requirements, are the need for minimal core and cladding concentricity error. Those specifications, coupled with measurements of core ellipiticity, are true hallmarks of manufacturing quality. In short, the cable's conductive core should be round and remain round. Further, a non-reflective cladding which also needs to maintain a proper geometric relationship to the conductor should surround it. Don't look for these metrics on the packaging at your local hifi emporium, however. Few manufacturers will publish such specifications.

In conclusion, TOSLINK has come a long way since those heady days decades ago when we first discovered the ability to transmit digital audio data on a beam of light. Contemporary manufacturing processes and materials management abilities allow a level of precision and performance that were unattainable just a few short years ago. A good, recent production TOSLINK interconnect boasting a quality quartz glass substrate, step indexed multi-fiber conductors, low numerical aperture and low-loss flexibility will provide faultless transmission of even the most challenging multi-channel digital soundtrack. And best of all, there is no need to attach a battery to the dielectric!

We would like to thank Impact Acoustics for allowing us to reprint this informative article.