The Truth About Spiral Shield Cables 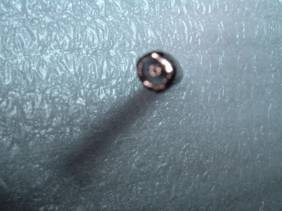 Normally when a spiral shield is used on a cable it is for one of three reasons, increased flexibility, ease of termination, or reduced manufacturing costs.

In the case of a spiral shield cable the shield current 'I' follows the spiral and is at an angle ø with respect to the longitudinal axis of the cable, as shown in the figure below.

The longitudinal current I(L) acts the same as the shield current on a solid homogenous shielded cable.

As a result of this increased inductance, the characteristic impedance of the cable will be larger than what you would predict by the dimensions alone.

The next question to ask is, are their any other advantages/disadvantages to this type of spiral construction of both the shield and center conductor? The answer is, yes.

Both the shield and the center conductor are tubular, with spiral current flow; hence a longitudinal magnetic field exists inside the tube. Due to the magnetic field inside the tube there will be current on the inside of the tubular conductors. This means that the current will flow through more of the conductor cross section, thus reducing the skin effect and decreasing the AC resistance of the conductors. The skin effect is related to eddy currents within the conductors, hence the construction will reduce the eddy current loss, but at the expense of increased inductance.

Normal braided shield cables also have shield transfer impedances that increase at high frequencies [2], but the increase is much less than that for the case of a spiral shield cable.

Does the advantage of a lower AC resistance overcome the disadvantages of increased inductance and increased shield transfer impedance when used for video signals? The answer is clearly, NO! Spiral shields (as well as spiral center conductors) are in essence inductors (coils of wire), which make them inappropriate for use at video or any other high frequencies. In addition, the increased shield transfer impedance will reduce the high- frequency (above 1 MHz) shielding effectiveness of the cable. Video signals are especially susceptible to such HF-interfering signals if coupled into the cable.

A good discussion of spiral shields is the book by Anatoly Tsaliovich [3]. I often refer to this book as containing; "more than you ever wanted to know about cable shielding."

The poor quality of shield in this exotic cable only tells part of the story behind the signal loss and ghosting I experienced when using it for HDTV applications. Characteristic impedance is the next issue we will examine with this cable example and/or other exotic cables in the industry touted as being ideal for both audio and video applications. The sad reality is the cost of materials that make up this cable are less than even most free OEM patch cords. Yet the unwary customer at a high-end storefront may never know this since they observe a $1200 price tag for a 2 meter cable. Toss in a snazzy salesperson spouting the manufacturer's pseudo science and snake oil claims (and the wonders of what this cable can do for their precious home theater system) and you can see why we desire to educate the masses.