This is how the Sony managed to reproduce the reference signal (Sine wave @ 997 Hz 0° phase): 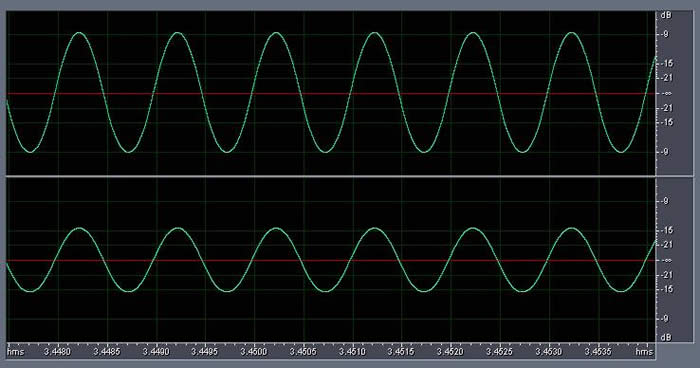 Note that the peaks of the waveform for the left channel is just above -9dBFS. The peaks for the source waveform is at 0dBFS exactly, I deliberately captured the output of the Sony player with a conservative recording gain (giving nearly 9dB of headroom) to avoid any possibility of 0dBFS+ levels clipping the soundcard.

For reference, this is the frequency analysis of a representative point in the above waveform:

As you can see, the original 997Hz pure sine wave is reproduced fairly well, with harmonic distortion artefacts (corresponding to 2X, 3X, 4X, 5X and also 1/3 X, 1/4 X etc.) well below 60dB in comparison to the fundamental frequency. The peak at 50Hz is residual noise from the power supply (240V 50Hz in Australia).

The Sony player did really well, and was able to reproduce 0dBFS+ levels at fairly close to theoretical levels with no signs of clipping:

As you can see, no signs of clipping at all (the soundcard captured the +3dBFS peaks at around -6dBFS given the 9dB headroom allowed by the recording gain as explained earlier).

The frequency analysis shows that the player reproduces 0dBFS+ levels with no significant increase in distortion.

Unfortunately, the Denon DVD-2200 did not do as well and definitely clipped on 0dBFS+ levels. As you can see from the following graph, the DVD-2200 really has no headroom at all above 0dB FS and is clipping the signal (Sine wave @ 11,025 Hz 45° phase):

Incidentally, the AVC-A1SE+ uses the same DACs (Texas Instruments/Burr Brown PCM1738) as the Sony SCD-XA777ES, so it just goes to show the ability to handle 0dBFS+ levels depends on the surrounding design and is not inherent in the DAC.