100 Watts in Every Channel
We're in the late nineties now and Dolby Digital, AC-3 as it was known back then, becomes available. The configuration is 5.1 and it is "recommended" that all channels in receivers be of the same power. THX recommends the same equal power for all channels so for the first time since the mid-eighties there is actually some direction given to receiver manufacturers. And as usual, the burden went back to the product managers and engineers who now were faced with producing 5-channel (at the minimum) receivers with wattages and at price points that ten years earlier had been stereo-only product. AC-3 changed the receiver category which saw for the first time examples of "statement" integrated amplifiers like the Yamaha DSP-A3090 which retailed for $2500(!) in 1996.

Why back to the integrated amp configuration? Quantities . Even at $2500 the all-channels-equally-powered A3090 was seen as somewhat of less than a fully acceptable statement piece in America because it had "only" 80 watts per channel x 5.

The Yamaha DSP A-3090
Europe and Japan had also embraced 5.1 surround and to these buyers with generally smaller living spaces the 80 watts per channel was quite acceptable. So the DSP-A3090 went on to sell in the thousands while paving the way for equal high power receivers at the lower and more traditional price points. 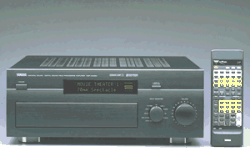 Now, jump forward to the current paradigm asked of the leading mid-fi receiver manufacturers. That all receivers, no matter how inexpensive (for the larger Japanese manufacturers), must be rated at 100 watts/channel. How is this possible?

One answer to this seemingly incongruous specification is that some 100 watt amplifiers are more capable than others when taking on lower impedance speaker systems. But amplifiers are never rated when driving speaker systems, they're rated when driving fixed-load 8 ohm or 6 ohm resistors (which can be a much easier load to drive from an overheating standpoint than a 4 ohm load). This fact gives the manufacturers a little wiggle room with their power spec and the amount of costly heat sinking they must use to obtain agency approvals.

The bottom four receivers in a line may have 0.06% THD and the top two receivers may have 0.04%. This number is really nothing more than "graph manipulation"

This "wiggle room" is more real than you might expect because many loudspeaker manufacturers' supposed 8 ohm impedance loudspeakers are closer to a 6 ohm rating than being a true eight ohms. The loudspeaker guys design this way, using woofers with a 5.5 ohm DCR (direct current resistance) so that their loudspeaker will play louder than their competitor's 8 ohm speaker. Louder is always better on the sales floor.

The 6 ohm minimum rating that has so many consumers concerned when they see it on the back of their just-purchased receiver is also a nod to testing agencies such as UL that cost cutting had to take place with a 100 watt $300 or $500 receiver. There are a couple of facets to this argument:

A second, also fairly well understood way to be able to quote "more power" is by quoting the power at only 1kHz instead of the more traditional 20Hz to 20kHz figure. In some cases the difference can be 15% to 25% more power at 1kHz. This type of rating is sometimes seen with a manufacturer who has two separate levels of distribution with separate model numbers for each level, though the actual receiver itself may be essentially identical.

For instance, one level of distribution might be mass market outlets where it is assumed that the typical customer is less sophisticated and will thus look only at the single (and highest) power rating as an indication of a receiver being "better than" a lowered powered competitor. The other level of distribution is with the audio specialist retailer who has been with the manufacturer for sometimes decades. It is the audio specialist who will have the "signature" line of model numbers, so to speak, all with power outputs rated from 20Hz to 20kHz and a distortion figure which is usually ( but not always ) carried throughout the line.

The last and least understood area wherein the manufacturer can retain their 100 watt rating across the line can be understood if you learn how to put a few seemingly disparate specifications and a power vs. distortion graph together. I'll stick with Yamaha as my prime example since they are known as one of the dominant players in the mid-fi category, (at least in the enormous quantities they sell through their various distribution channels).

Here's an example of your ubiquitous 100 watts RMS/channel output power vs. distortion curve which you seldom see published anymore:

Your "conservative rating" manufacturers like Harman-Kardon, for instance, will quote only power ratings for their receivers which always stay about 20% under the area in which the curve is fairly horizontal. In this case HK might rate this as an 80 watt RMS/channel receiver. Power for HK (and to an extent Rotel, NAD and Marantz) are rated in this "old fashioned" manner. This is part of these company's "better performance" marketing strategies and it is an entirely legitimate one.

Read the Complete Thread
Deep Ear posts on July 17, 2015 15:11
Over the years, AV receiver manufacturers found ways to rate power less conservatively to give the illusion of more.

We all know this, we see it all the time.

But how did this trend start?

What I recall happened when I became Yamaha's Product Manager in 1983 (from Kenwood Car Stereo) was as follows:

The Japanese audio manufacturers had all just decided to standardize component widths to 430-435 mm while mini component width which was common in products in Japan and I think the European market at the time was standardized at 350 mm. With this move the gargantuan high power receivers like the popular Sansui 5000 which dominated military exchanges all of the world ceased to be produced. So all manufactures were now tasked with getting (true RMS) higher power out of this much narrower, standard receiver width.

Second, Yamaha was really concerned with meeting UL specs because they and all their competitors were trying to come out with and market what they wanted the American audio consumer market to believe were proprietary amplifier typologies that “sounded better” than their competitors. For instance, Yamaha came out with a pyramid shaped amplifier with “X-power”. But unfortunately X-power was based on Bob Carver's small 200 Watt per channel 6“ x 6” x 6" cube topology. So I recall the bottom line with X-power was Yamaha's US-based certification engineer (named Lucky, no joke) told me at one time he had blown up 25 pre-production prototype amps Yamaha, Hamamatsu, Japan had sent him, none would pass UL.

Next, Yamaha Japan started asking me about the old IHF, Institute of High Fidelity power specs that Julian Hirsch (deceased) of Stereo Review followed which is essentially the same 20Hz - 20kHz, 8 ohm @ 0.XX% spec (at that time in the late 60's and early seventies still called cycles per second) that you are trying to get back to now. Yamaha's engineers told me they were having a really hard time meeting the full 20 Hz to 20 kHz bandwidth power spec at 8 ohms, how about if they used 6 ohms, would that be okay for our U.S.-only receivers? In the same breath they promised they would keep the 8 ohm 20 Hz to 20 kHz full bandwidth spec for Yamaha's integrateds and separates which were sold world wide.

It has been decades since Yamaha receivers first wowed specialist audio dealers (six hundred selling Yamaha at the time) and baby boomer audiophiles like me when introduced in the early seventies. At that time (wide and deep) Yamaha receivers stood alone against lesser manufacturers products which claimed 500 watts!, 1000 watts!. The power amplifier ratings game cycle as you have so astutely observed has sadly come all the way back to where we were then.

The one good piece of news I can share Gene is that when I began designing speakers for Marantz in Sun Valley, CA in 1971 Dawson Hadley (deceased) Marantz's chief engineer of American-built integrated's and separates started me off wiring the internals of my prototype speaker designs with twisted 14-gauge wire, a trick he had learned from JBL's Bart Locanthi (deceased). Physics don't change, but sadly a new generation of snake oil sales and marketing slubs seem to be ever-present. Sigh…
vinod.r posts on July 16, 2015 00:55
Hi Guys,

It is another way of rating which is followed in products in Japan. Please correct me if I am wrong.

Splicer, post: 1089571, member: 63410
Gene, I just wanted to say THANKYOU for pretty much vindicating me on AVS. For years I have been ‘complaining’ that the marketing used on these lower (and sadly, upper as well) end subs always stating ‘1000 watts!’ (as an example) and always been chastised for doing so. But as you said in the video, look at the fine print to see the REAL numbers. The inflated, unusable and unrealistic numbers provided anymore are no more than marketing snake oil. Sort of like directional cables but I digress.

Just wanted to say thanks, I enjoy all of the Audioholic videos and the friendly bantar that accompanies them.

I appreciate your compliments. We are here to cut through the nonsense in marketing which sometimes makes us unpopular with the manufacturers and the fanboys too. At the end of the day, we share a common goal, a better audio experience without all the fluff. Hope you can participate more on this forum too.
Splicer posts on July 12, 2015 10:56
Gene, I just wanted to say THANKYOU for pretty much vindicating me on AVS. For years I have been ‘complaining’ that the marketing used on these lower (and sadly, upper as well) end subs always stating ‘1000 watts!’ (as an example) and always been chastised for doing so. But as you said in the video, look at the fine print to see the REAL numbers. The inflated, unusable and unrealistic numbers provided anymore are no more than marketing snake oil. Sort of like directional cables but I digress.

Just wanted to say thanks, I enjoy all of the Audioholic videos and the friendly bantar that accompanies them.
Post Reply