Slew Rate in Audio Amplifiers - What Does it Mean? 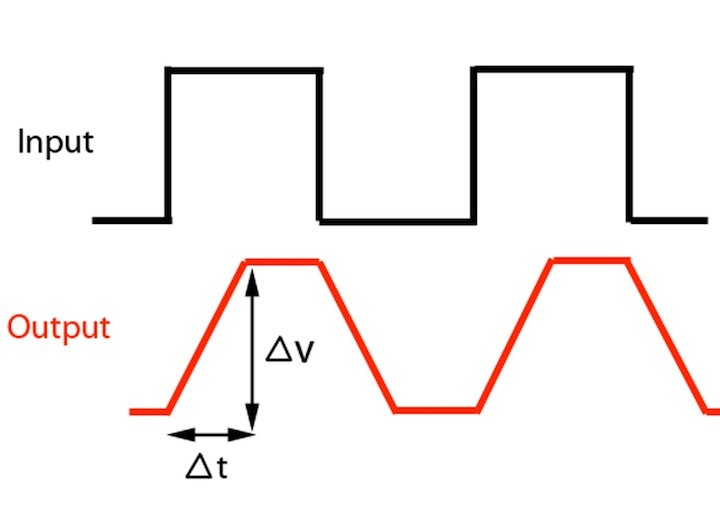 Ever wonder what slew rate was all about? No, it has nothing to do with how a drunk person slurs their speech. This article gets to the basics of Amplifier Slew rate and what it means.

When reviewing the spec sheet of an amplifier, one potentially unfamiliar term you may run into is slew rate.  There are a lot of gobbledygook explanations floating around the web which seem to misunderstand the basic premise, so we at Audioholics are here to clear the air. In short, slew rate has little to do with how an amplifier produces dynamics so much as its ability to effectively maintain output into higher frequencies.  It is the rate of how quickly an amplifier can respond to a rapid change of input level.  This is measured as a change in voltage with respect to time as can be seen in the main image of this article.

The first thing that people tend to see in slew rate specification is that it is measured in volts/microsecond or v/usec. From there, people jump to the conclusion that an amplifier with a higher slew rate is more responsive, dynamic, etc. Since a picture is worth a thousand words, let’s take a look at a relatively simple graphic. So now that we know what it is, how much slew rate is enough? The basic formula to obtain a minimum necessary slew rate for an amplifier is:

As you’ll note, the factors we need to fill in are how high in frequency we want to go and how much output, as measured in volts, we want to achieve.

So as a real world example, what is the bare minimum slew rate we need to effectively achieve THX Select 2 certification, which calls for peaks of up to 50V on all channels? Well, first we need to select a frequency to base our calculation on; 20kHz would seem a good starting point, as this is the generally accepted upper limit of human hearing. Plugging those numbers in, you’ll find that a THX Select 2 amplifier should have a slew rate of no less than ~6.3V/usec if it aims to achieve full output at 20kHz.

Most well designed amplifiers are flat out to 100kHz so in that case you would need a minimum slew rate of about 32V/usec in order to achieve such a wide bandwidth.

At this point, an observer may note that the number calculated above is a lot lower than the specifications you are likely to encounter, even on entry level receivers. As an example, the Harman Kardon AVR 1565 boasts a slew rate of 40V/usec. Considering its rated power of 70W per channel into 8 ohms (the above example of 50V translates into a 312.5 watt peak at 8 ohms), 40V/microsecond would appear to be gross overkill. Realistically, it is a matter of good engineering. The bare minimum that we’re calculating is just that; most good linear amplifiers aim for flat response well beyond 20kHz, not because we can hear that high or because we have loudspeakers capable of reproducing such frequencies effectively, but to ensure slew rate related problems are a total non-issue within the audible band. Simply put, once you start tossing in other requirements, i.e. expecting practically zero distortion even at full power into a difficult load at 20kHz (a problem area for some amplifiers, notably Class D), a bit of extra margin in terms of slew rate can come in quite handy.

With all this in mind, what are the real world consequences of a marginal slew rate? This question is a bit more difficult to answer, as a lot depends on the source material. It should be pointed out that unlike laboratory conditions, most people aren’t running 20kHz sine waves through their systems at full output; real world material typically has little energy in the top octave (10kHz-20kHz), which can help mask the effects of a marginal slew rate. Odds are in and of itself, slew rate is unlikely to be a limiting factor in an amplifier’s real world performance; of course as mentioned above, if you’re expecting practically perfect performance under all circumstances, extra margin doesn’t hurt.

Slew Rate (SR) indeed expresses the ability of an amplifier to follow the input and as the formula implies this applies to the high frequencies within the passband of the amp. However most amplifiers have an input low pass filter used to minimize RF ingress and to limit slew rate induced distortions. Therefore even if the intrinsic SR of a power amp can be higher most designs tend to limit the bandwidth of the applied signal and in consequence the real SR may be lower than the one specified. If a manufacturer specifies “SR measured with input filter disabled” then it is the real deal.

By itself SR is a second order specification, not all manufacturers publish/measure it and is not indicative of sound quality if not accompanied by distortion numbers at the frequency of interest. For example an amplifier can follow a square wave at 20 kHz very closely in terms of rise/fall times, which in turn will give a very good SR number but if it does so with 20% overshoot and/or with long settling times (ringing that lasts for most of the pulse duration)…then the amplifier is probably not very good sonically (it has a hot and seemingly “detailed” top end).

This shows that if you need to deliver the same power at the same frequency into a higher load you need a higher SR. Considering the impedance swings of real world speakers we can see why having a healthy SR is not a bad idea as long as distortion and other parameters are kept in check.

On the other hand nobody expects a power amp to deliver full power at say 200kHz, the filter capacitors in the supply may not be able to sustain that kind of ripple current. In our detailed review of the Classe CT-2300, we measured impeccable performance in every aspect.  The amplifier was wide bandwdith, low distortion and very capable of driving low impedance loads at high sustained outputs.  This amplifier exhibited no slew rate induced problems.

By now you the reader should understand that slew rate has precious little to do with the dynamics or punchiness of an amplifier, although one can imply that a more powerful amplifier requires a higher slew rate. Slew rate is all about effective bandwidth. Further, you’ll find that you don’t necessarily need a top echelon amplifier to extend useful bandwidth well beyond 20kHz. Presuming Harman Kardon isn’t fudging their specs too badly, the slew rate of the entry level AVR 1565 is sufficient to give it full power output to 100kHz and beyond, which even a conservative engineer would consider (in a dry tone) “adequate”. Of course, now equipped with the knowledge of how slew rate and bandwidth are intertwined, you too can see just how true some claims of bandwidth out to 300kHz and beyond really are. Happy listening (and calculating)!

Scott Weiner, post: 1093262, member: 75432
1. In a car audio amplifier, what is considered a good slew rate?
2. Most importantly, with all other things being equal, how is sound quality affected between amps where one amp has a much better slew rate than the other?

It's a spec that's used as a design goal and if you have been exposed to loud sounds for a long time, your hearing has been damaged, to some degree. I don't care what anyone says, they can't be exposed to loud AND have perfect hearing.
Scott Weiner posts on August 15, 2015 10:56
1. In a car audio amplifier, what is considered a good slew rate?
2. Most importantly, with all other things being equal, how is sound quality affected between amps where one amp has a much better slew rate than the other?
gerrydelasel posts on February 14, 2014 09:37

cyclebrain, post: 966024
Exactly what I said. Given the same voltage swing, bandwidh and slew rate are directly related.

Sorry, but no, bandwidth has nothing to do with slew rate.

Slew rate comes from an amplifiers ability to dump current into a capacitor. It can be defined as:
Slew rate = Ipk/Capacitance

So why do audio power amps claim a slew rate? Where is the capacitor?
It is inside the amplifier. The slew rate is determined by the input circuit's ability to dump current into the Miller capacitance of the next amplifying stage.

Bandwidth is an entirely separate issue. The bandwidth of an amplifier is the same whether yopu're talking about small signals or large ones. Ideally you want the slew rate to be high enough that when amplfying the highest frequency at the highest amplitude, you don't get slew limiting distortion. But if the slew rate is too small, you could hit slew limiting even at frequencies well within the bandwidth, simply because you're asking the amplifier to produce signal swings that are too big. Back off the signal swing, and you move away from slew limiting.
cyclebrain posts on April 28, 2013 01:17

Exactly what I said. Given the same voltage swing, bandwidh and slew rate are directly related.
Steve81 posts on April 27, 2013 14:17

cyclebrain, post: 965887
What is the difference between slew rate and bandwidth?
Given a fixed voltage swing, only frequency will have an effect on rate of change.

One other way of wording it:
Amplifier Sound - What Are The Influences?