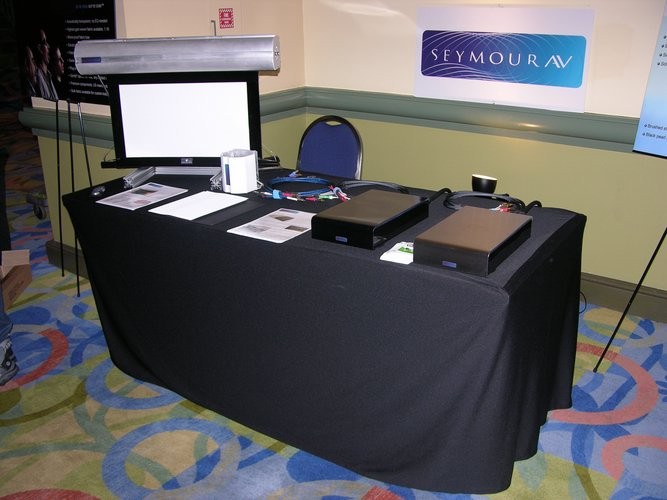 Seymour AV was showing off their ICE Block amps at the Audioholics State of the CE Union event. They had two of their new Ice Block amplifiers on display. Both were the 1000w models (which currently retail for $1299) in the brushed stainless steel and black pearl blue five-coat glossy paint. The latter look black (with aluminum sides) until you get up close and notice the slight blue sparkle to them. Running up the sides (following the top plate) is a thin layer of what looks to be Plexiglas that glows blue when the amp is powered on. A very cool effect. The amps are heavy for their size and look to be very well constructed.

On the back they sport a balanced and a RCA style input, very nice looking 5-way binding posts, and switch to indicate which input type you are using. You can actually order the RCA input in different colors. Of course the standard red and white are available. Also available is black, green, blue, and yellow. This should help all you organized types keep your amps straight when you buy a monoblock for each channel.

The bottom had Vibrapod isolator feet for "horizontal and vertical vibration isolation." While it may be gimmicky, they were pretty cool. What didn't look so hot was the "audiophile" power cord. Correction - it looked great - thick, heavy, a real statement piece. What it also looked was unwieldy. Perhaps they just needed to be broken in. We'll have to see how they perform when we get a unit in for formal review.

The ICE Blocks were not hooked up to other equipment (unfortunately) so they were more like booth babes drawing you in to Seymour AV's display. Well, it worked for me! The monoblocks come in 200w, 500w, or 1000w models and run from $999 to $1399 (currently $100 off in the Audioholics store). They are exactly half-standard width, allowing for a pair to fit on a standard shelf. Because they are ICEpower amps, they run extremely cool (and efficiently greater than 80% versus ~20% for a Class A and ~50% for A/B) so you can stack them if needed. Their idle power requirement is something like 15 watts for the big amp down to 7.5 for the small one so they don't even have a standby mode.

Overall, I was really impressed with the looks and design of these amps. Pricing is competitive for the class (many ICEpower amps cost a lot more) and the lower priced alternatives for the most part don't have 1/4 of the looks of the ICE Blocks from Seymour AV. With the 1000 watt amps only $400 more than the 200 watt for 5x's the wattage, I can see a lot of people bumping up for the extra headroom. For more information, please visit www.seymourav.com.

It depends on what wattage output you're referring to, which is why we put “rated power” as the general power classification that we would like the product compared with, and “max output power” right out of the ASP data sheets.

For example, the following amps all use the same 1000ASP module and thus have identical specifications but are classified and/or named so that they are positioned however the company sees fit.

They handle 2.7 ohms nominal continuously, and can dip below 2 as long as it's not average. Genesis, for example, dip to around 1.6 and they handle them just fine.

In listening tests on the B&W 800D, a former sales manager at a blue-chip audio dealer found that in comparison to the Ayre MX-D ($20k/pr), the 5001 Ice Blocks toned down some of the harshness that the 800Ds can exhibit and sounded a bit more natural. In comparison to the Classe CAM-400s (~$10k/pr?), he thought they sounded more similarly smooth on the top end, but the Classe had a bit more extension in the bottom. While the 5001 are my general favorite Ice Block, the 10001 are more dynamic with deeper extension in the bottom octave, so if you're trying not to use a sub, then I'd recommend the 10001. If you do have them crossed over, I'd recommend the 5001.

The 800Ds are typically pretty easy to drive compared to others in their price class, but they soak up the power when you have it. Maggies are similar: pretty benign load, but hardly ever enough power in reserve.

There are a lot of charts that you could be asking for. I've pasted the 5001 THD chart below, but for all of them you can access the module data sheets here: http://www.icepower.bang-olufsen.com/en/solutions/speaker/ASP_SERIES