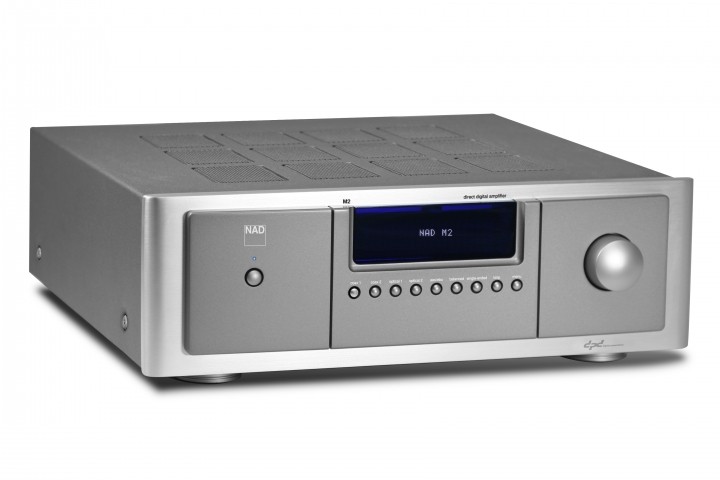 NAD Electronics has been well established as a leading name in high end electronics. Often you'll hear their name in the same sentence as Rotel, Parasound, and Lexicon. One of the main problems with higher end electronics is that they are often behind the curve for technological advances that bigger names like Denon and Yamaha have the infrastructure and capital to tackle. When you only put out a new amp every few years rather than every year or every 9 months as some of the bigger names do, it's hard to keep ahead. NAD is looking to break out of the mold with their new Masters Series M2 Direct Digital Amplier.

The M2 is a different sort of digital amp. Often when we think digital, we think ICEPower. ICEPower, developed by Bang & Olufsen, is a switching amp that, for all intents and purposes, acts similarly as a traditional amp - you place it between the preamp and the speakers. The preamp does the digital to analogue conversion and the amplifier simply powers the speakers. The M2 is different.

While the M2 can accept an analogue signal like a traditional amplifier, it can also accept a digital one. With reportedly fewer internal amplification stages than a traditional preamp, the M2 strives to maintain a more "pure" signal chain. It also has a rated 250 watts into 4 or 8 ohms continuous with 500 watts of dynamic power.

One of the claims by NAD about their M2 is that it is the "first digital amp to fully exploit the resolution potential of HD audio." We're not exactly sure how that is true given that their digital inputs are limited to optical or coaxial type. No type of HD audio that we can think of is sent over anything other than HDMI these days. Not even nearly dead DVD-A or SACD. The only increased bandwidth we can think of is using a Blu-ray player that will send the full bandwidth DTS or Dolby Digital over those connections but you are still missing out on the lossless formats.

In addition to balanced and RCA analogue inputs the M2 has dual coax and dual optical inputs, a single optical and coaxial output, 12 volt and IR inputs, and a 12 volt output. Each of the digital inputs can be renamed by the user for display on the front of the unit. There are two switches on the back, one for soft clipping on/off and another for 12 volt sensing off/auto. There is an additional optical input labeled "loop" which is for use with PCs or Macs as an external room correction system or EQ. The digital outputs are for bi- and tri- amping a speaker. RS-232 control is available for those integrating with a home automation system.

NAD Electronics has been highly acclaimed in the audiophile world for their sound and they've made this amp with those fans in mind. They have a laundry list of technical "firsts" that they claim will provide the most dynamic range, cleanest sound, and chocolaty midranges including "Distortion Canceling Circuit and Adaptive Antisaturation Clamp" (I believe that might have something to do with midwifery but that's just a guess), "Direct Digital Feedback Amplifier" (developed, I believe, in conjunction with Jack White of the White Stripes), "Power Envelope" (when your power absolutely, positively has to get there), and "PowerDrive" (when your power has had too much to drink and needs a lift home). While we're sure these all have technically positive effects on signal purity and fidelity, it is not yet clear that it will have that much of an audible effect.

There is a single power cable and an on/off switch on the back of the M2. No provision for a standby or "auto on" mode which seems to by typical of digital amplifiers. We're sure someone in California is looking for a way to tax that or make them illegal as we type. The M2 does have three separate internal power supplies - one for each of the channels and one for control. This effectively gives the M2 a "dual mono" configuration without having two power cords. What is nice is that the back of the amp has not only 2 pairs of binding posts (one for each channel) but 4 with the second pair marked "B." If these are used in the traditional way, this should make A/Bing speakers easier or perhaps switching between two different sets of speakers purchased for different types of music. From the white paper, all we saw was that you could use them for bi-wiring which is, in a word, lame.

The M2 is really sort of a hybrid. It is a traditional amp with non-traditional inputs. It is an integrated amp in spirit but doesn't have all the functionality that a traditional integrated would have. It is certainly a specialized product that, at its heart, is a digital amplifier. At $6k, you would do well to consider using the internal DACs of the M2 as you certainly are paying for them. NAD's Master Series M2 Direct Digital Amplifier will be available this summer from authorized NAD dealers at a suggested price of $5,999 (U.S. MSRP). Of course, you can already pre-order it online for $3,500.

I hope that it has more speed and resolution than a Spectral setup.

Hi, and Welcome to the club.

The price that you quote for the NAD M2 digital amplifier seems to originate from the first previouly mentioned price (CES 2009). Seems that it went up from there (not surprising coming from NAD).

I am really looking forward to this amplifier. If the price is $3995.00 as stated in Stereophile (blog.stereophile.com/ces2009/go_nad) then it is worth it.

I hope that it has more speed and resolution than a Spectral setup.
Lordoftherings posts on May 31, 2009 23:39
Souvenirs back from memory alley.

Kitsum, post: 575113
It's the A-G10, are you sure the A-8800 has the Grand Integra moniker? It's not in my 1988 Onkyo GI catalog.
At that time Philips, Pioneer and AKAI had great digital integrated amplifiers, but as you said they were very expensive. The AG10 listed for $3K. Still a great amp today even with it's limited remote control. (Controls volume and polarity only).

Only the A-G10 has the Grand Integra certification.
The A-8800 is only an Integra.
And I already made that clear in my previous post, if you had read it correctly.

I mentioned the Akai AM-73 Digital Integrated Amp because at that time, it was probably the best deal for a Digital Integrated Amp, with excellent sound quality and lots of power too, 1987 model
The Sony and Luxman had mixed reception for their sonic quality from critics on their digital sections, 1986-87 models.
Also, you might remember the Fisher Professional Digital Reference Series RS-Z1 Stereo Receiver.
And the Sansui AU-X911DG Digital Integrated Amplifier/DAC.
Also the Technics SE-M100 DAC/Digital Amplifier.
These last three are from 1989.

And Pioneer was making excellent integrated amplifiers in those years, like the Pioneer Elite Reference Series, the A-91D (class A output).
And also the A-717 (class B output). Both 1988 models.
Also from Pioneer, the A-616 and the A-331 Digital Integrated Amps.

** For me, personally, 1988 is a very special year for several audio product releases.
And for a few other reasons too.

I do remember some Akai Digital Stereo Integrated Amplifier, the AM-73, from 1987.
And also the AM-93.
The AM-73 (4-times oversampling converter) has a single optical input (the AM-93 has one more, with 8-times oversampling), and 3 coaxial digital ins, with a pair of digital outs as well (for DAT machines). The AM-73 was an excellent integrated amp with ability to pass peaks over 200 watts with ease. And it has a very good sound too. And it was quite heavy.
Also from 1987, there was Sony and Luxman with digital sections.
And there was a Denon Digital Preamplifier too, that garnered universal praise for it's very exceptional sound quality.

It's the A-G10, are you sure the A-8800 has the Grand Integra moniker? It's not in my 1988 Onkyo GI catalog.
At that time Philips, Pioneer and AKAI had great digital integrated amplifiers, but as you said they were very expensive. The AG10 listed for $3K. Still a great amp today even with it's limited remote control. (Controls volume and polarity only).
Kitsum posts on May 31, 2009 20:36
Deleted post.
Post Reply