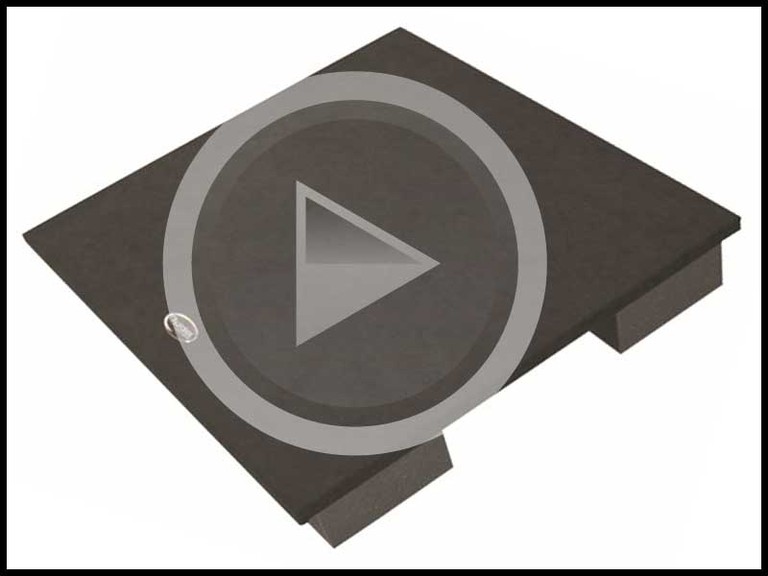 What the heck is it? OK, the SubDude HD is a platform for your subwoofer. Why would you want it? Well, a subwoofer, as you may know, generates a lot of vibration due to the fact that it puts out low frequencies and has a larger driver than most speakers. Well, these vibrations move into your floor and reduce the actual efficiency of the sub. After all, if it's expending energy into moving your furniture around the room, its not putting all of its energy potential into making sound waves. Plus it can just be a nuisance - as anyone who has experienced dishes rattling in their cupboards during a bass-heavy scene can testify.

The technical mumbo jumbo behind this is a principle called secondary resonance. Essentially you create another vibrating source (or two, or three) that cancels out some of the output from the subwoofer. It's no good and it can be alleviated. The SubDude HD effectively reduces secondary resonance by decoupling your subwoofer from the floor so you hear your sub, and not the vibration of the other objects in your room. When speakers are tested in anechoic chambers, they are isolated from objects around them that could introduce resonance. With the SubDude HD, you are sort of recreating a similar scenario in your living room.

We use SubDudes in several of our reference systems and the results seem to be clearer bass with less muddiness around the point where the sub crosses over into the range of our main speakers. At just $60 each, it's a fix you almost can't help but try.

The Auralex SubDude HD is a 15" x 15" x 2.5" platform wrapped with a cleanable velour. It is available in any color so long as it's black. The SubDude may not get rid of all your rattles, but seriously, that's what we can a "quality" problem.

Like This? Check out our other Acoustical Product Reviews!
Discuss This Article
Tim DH posts on November 23, 2013 19:39
Auralex effectiveness

I was always told and believe that a speaker enclosure needs to be rigid so the box isn't getting pushed around by the cone movements and actually dissipating the cones output energy. In effect you would get a little less output from the speaker and the sound it's generating would be a little blurred, the cone is not moving in a perfect pistonic motion.

I would think the Auralex would decrease the output level of the driver and make imaging a little less precise??!! If things are vibrating in the room then fix or eliminate the rattle.! Did you guys measure an output level of the sub with and without the stand to see if output is reduced or affected.
split0101 posts on November 08, 2010 20:58
Works Great

I just picked up a Gramma for my EP500 (SubDude was to small) and it works great. I feel that it has helped with the floor vibrating every time the sub fired which was pretty annoying. I ended up hearing more of the rattles then the actual sub.

I read on some forums guys building their own isolation pads from old mouse pads but I seriously doubt that would work as that foam would compress defeating the purpose.

Shiitaki, post: 757913
In the audio world there are so many extremes, and different opinions about which is best. In so many reviews one of the steps used to critically listen is to install spikes that are designed specifically couple a speaker to the floor so the cabinet doesn't move around. This product specifically allows the sub to move around without coupling it to the floor. Exact opposites. The real question is does the sub dude come with spikes?

Since the foam in the Sub-Dude's function is to sonically isolate the subwoofer from the floor, my guess is that the foam does not transmit the vibrations that typically cause speakers to move. If the vibrations aren't finding their way through the foam, then the bottom of the Sub-Dude isn't gonna be subjected to any forces that would cause it to move.

Now, when it comes to the subwoofer moving around on top of the Sub-Dude, I don't know, but my subwoofer, which tips the scales at 90 pounds, doesn't seem to exhibit any problems with wandering around my listening area (or, if it does, the distances moved are microscopic).

I defer to someone else's more expert opinion on this latter case, but I'll stick by my guns when talking about the Sub-Dude platform not moving.
Post Reply
About the author: