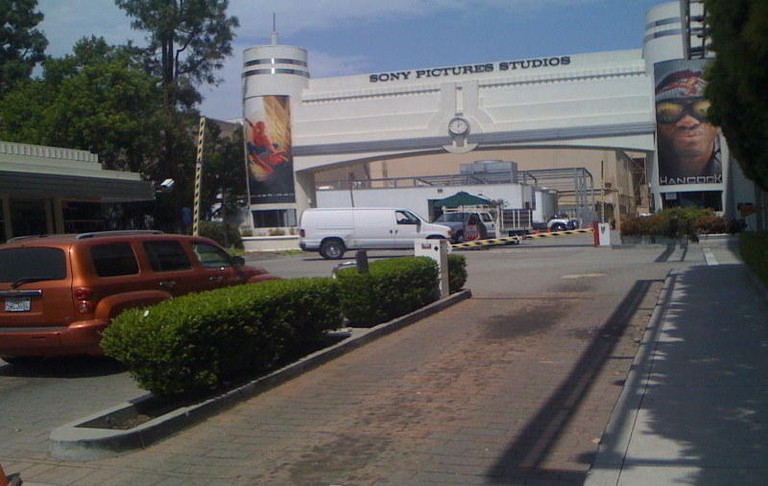 It’s not the first time I’ve been to Sony Pictures Studios in Culver City, California (or for that matter back when it was MGM) there have been red carpet celebrations, visits to films in progress along with interviews shepherd by public relations for a score of “suits” involved in everything from technology to entertainment. But it’s the first time I’ve ever been invited here to see Sony touting their electronics - specifically Blu-ray players - or to delve into the kind of content that internet connectivity can extend out from a locked silver disc. Calling it the “Sony BD-Live Experience” may kind of take the mystery out of what is going to occur, but like so many things, it will be the execution both hard and soft that will either elevate or denigrate what is being shown.

So I’m expecting a row of chairs inside a room, not some bash in one of the airport hanger-sized enclosures that house film productions. But - surprise - that’s exactly what I’m getting, as I’m directed to Soundstage 29, but I’m not here for sparkle, OK maybe a little bit so I quiet down as I sit in a row with other journalists facing one huge screen hugging the wall.

As the lights dim I’m not surprised that Sony is running Blu-ray high-definition clips of their films - but instead of going for sizzle, there’s steak as they’ve quite sensibly realized that Blu-ray has suffered an informational smack-down. Between the HD DVD vs. Blu-ray wars, the subsequent pulling out by Toshiba, the confusing aftermath of high priced players, multiple generations each adding a needed update in the hardware, the bad economy - all this could contribute to the notion that Blu-ray’s in an uphill battle that’s just begun. But taking the stage to refute all this is David Bishop, President of SPHE. He correctly points out that 2008 saw over 36 million Blu-ray discs sold worldwide - a 300% increase over 2007. And he also points to BD-Live as more than just a way for a “locked” disc to compete with digital downloads: it provides access to new content through a compelling, always connected process, he says. [Bishop also mentions that Soundstage 29 housed one of the musical numbers for The Wizard of Oz, and that’s something cool to contemplate]

We also get some factoids showing that use of BD-Live is taking off: Lexine Wong, Senior executive VP worldwide marketing, coming front and center to deliver numbers like 10,000 unique weekly visitors going to the Sony BD-Live Portal, and how every disc from June moving forward will have BD-Live as an integral part.

But where we sit back up is on the hardware side, as Chris Fawcett VP General Manager, Sony Electronics, re-introduces the BDP-S560 Blu-ray player. First shown at CES, it has 1080p HD and high resolution audio format capabilities,

Sony’s simplified interface and other tweaks - but the real heavy hitter comes from it not needing an ethernet cable to be plugged in. That’s right, it’s got wireless inside. Now most see broadband connected devices (be that a Blu-ray player or otherwise) as a right, but that doesn’t make them easy to use even today (it’s embarrassing to complain since I remember all too well what it took just to get a 300 baud modem synced with a BBS board). So Sony goes some steps to facilitate that ease by adding a WiFi Protected Setup to make connecting to a wireless home network a faster process. And instead of going with the “G” wireless standard, the faster “N” is used. That’s great since “G” can’t really handle HD streaming, even though most of the BD-Live content right now is downloaded first before viewing (no doubt changing as time moves on). Being able to wirelessly connect also makes sense since, for now anyway, most folks aren’t going to be buying another player and instead taking the one they have from room to room (mirroring the early days of DVD players). And being able to save the content to flash drives using a USB stick as a simple and cheap solution to memory storage doesn’t hurt either. As does a price of under $400. About the only thing that hurts is that it won’t be available until July.

The presentation having ended, I've a chance now to view the software, which is to say Blu-ray discs of Sony’s with BD-Live. Amidst cocktail waiters presenting small bites of food, dual presenters stand at tables framed by the new BD player and a 42” HDTV screen. What I’m liking most about the way Sony is approaching BD-Live is that they’re not just making the content “generic” - for a general look-see you can go to Sony’s BD Portal that duplicates other studios by providing trailers, teasers on titles, etc. While BD-Live, which is to say the internet’s capability to download/access timely content should be a given as to the value, I would argue that a more exciting and appropriate use involves internet connectivity between people . So while downloading a panel discussion from Comicon after the Starship Troopers: Marauder disc was pressed, or viewing a global premiere of Angles & Demons through The Da Vinci Code BD is not to sneer at - it’s in the arena of social networking where the highest value can be found. Of course this requires both the desire as well as creativity on the part of the studios to make it work. Fortunately Sony seems to have gotten the memo.

So back to how BD-Live is being tailored to the disc: as example there’s the Casino Royale Two-Disc Collector’s Edition: the James Bond Trivia quiz being hosted by one person while others online sync in to compete - in essence what we have is peer-to-peer. And asking the question as to where the content for the game is being stored, I’m told that it’s contained both on the disc itself as well as the online server - meaning that additional questions could be inserted in the future, and that those video clips playing don’t necessarily have to be coming off of the disc moving forward.

Another example being presented is the Cadillac Records Playlist - again making sense since the title is music-oriented. In this case, you’re able to create a playlist of tunes taken from the disc and send this listing to a server where it can be seen/shared with others.

Maybe it’s not fireworks, but it proves the point of being directed towards an aspect of the film as a tie-in, rather than a generic addition (as does Step Brothers whose Boats ‘N Hoes” Make Your Own Video Editor – Create your own music video! allows for organizing video clips which then can be posted on the server).

But the jewel of the demos centers around The Da Vinci Code. First, BD-Live is used to provide access to a “bribe” in that you can get e-cash to see the upcoming Angels & Demons theatrical.

This isn’t new to disc purchases, but others have you going online on your PC, entering codes and then printing out the ticket. Here you’re using the BD player to enter a code through a menu (the ticket is then emailed to you). This kind of implementation makes perfect sense, as well as setting up for all kinds of things to be called attention to (i.e., sold) through this access to a Sony server online, such as ringtones, etc. In fact there’s no reason that such a process couldn’t be used for purchasing a ticket (oh hey, that’s now being done for a nameless Mutant heading to theaters shortly).

The disc also presents Cinechat in-movie chat - not exactly new since it first appeared a few months ago on Nick & Nora’s Infinite Playlist. However, unlike that title, Da Vinci has a broader audience and so most of those getting it will be seeing this function for the first time. What it does is simple enough: while viewing the movie you are able to “chat” via a text box with others also watching - the internet connection creating a “bond” between those viewing. Besides having to be signed up with Sony, everyone must have the disc in order to be watching while texting - but it’s also possible to text without doing this while in another Cinechat BD disc (such as Nick & Nora’s). An avatar image is also included as is an onscreen keyboard to use (the video image can be sized smaller to allow more room for the chat window). Other mobile devices, such as laptops and cell phones, can also participate if invited in for a chat (again provided that the person has signed in with Sony) - as example, I’m sent an email to my iPhone which contained a link to go to in the Safari browser. Doing this, then logging in with my user name and password lets me chat with the guy standing some 1 foot away. I also like the fact that no regional coding is affecting this chat - the person can be in the next room, next City or next Country. Of course you do need to know the language of the person chatting with you, unfortunately Rosetta Stone isn’t built in. Now for those craving more hi-tech, let’s add that the host of the chat can send time codes to others playing the movie so that they sync up and play from the same point. Sure streaming from one to another would be cool, but realistically it makes a lot more sense to have the video on the disc and do it this way. And considering the high storage capacity of BD discs, I see no reason why “hidden” content couldn’t be laid in for accessing at a later time once a signal is sent from a Sony server. All of this opens the door for a wide range of creativity, along with personalization aspects that have yet to be explored.

Heading home, I reflect on a statistic I heard from Adams Media Research - that there are now 10.5 million Blu-ray households in the U.S. (compared to an estimated 2.7 million reported by GfK in January 2008). It sure seems that people continue to want their entertainment, even in these tough times. It’s fair to say that Blu-ray discs provide home viewers with a quality picture as well as a value added proposition through BD-Live. Both seem a recipe for success in my book.

Read the Complete Thread
fredk posts on May 05, 2009 12:23
I must be getting old. I'm still stuck on the idea that the reason you watch a movie is to, well, watch the movie. All the rest seems like more stuff to use up time I don't have.
Post Reply