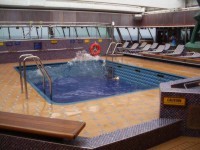 We're here at the 4th annual Home Theater Cruise (our first) and have to say, the weather has done its best to wreak havok on the entire cruising experience. Still, we're on a cruise - and a bad day cruising - we'll it isn't really that bad, is it? In fact, we were able to witness some very practical demonstrations for some of the concepts we've been hammering home for the past few years. For example, we spent our first evening studying the effects of wave propogation and were fortunate enough to see a live 3D demonstration that was very representative of the effect of bass standing waves and modes that can be found rippling through a typical home theater room.

I think that D-Box, one of the sponsors of the Home Theater Cruise, has nothing on a full moving cruise ship, hurling through the waters at 19 knots and rising and falling with the summed peaks of 15' peak-to-trough waves. I think, however, that we may have caught some of their motion programmers taking notes and discussing the finer aspects of what exactly constitutes "too far" in terms of pitch, yaw, and roll.

And here are some interesting shots I took from Deck 3 looking out the window at the ocean... Dramamine is your friend. :-) The sea was so bad, in fact, that we were unable to port in Nassau due to the fact that the seas were too rough for them to send a pilot ship out to guide us into the smallish port. Instead, we plowed forward and will land in St. Thomas on Tuesday as scheduled (the weather and seas are much calmer today).

Back to the Conferences...
Peter Putnam (who happens to be sitting beside me as I write this) gave a fairly detailed mini-seiminar on the future formats of flat panel displays. OLED will likely dominate the small device market in the very near future, while SED-technology (look for more in-depth articles on this later) seem poised, though not necessarily likely, to take on the large-format flat panel leaders. As for the plasma vs. LCD question, LCD seems to be firmly in control of the 42" and below market while plasma still controls larger sizes. The same issues apply in terms of brightness, contrast, panel life and color uniformity.

Today's conferences will include topics of Video Processor Design & Performance, Screen Types, and several other interesting topics and demos. So far, DTS and D-box have offered some nice parties that precede dinner and Runco, JVC, Furman, and HD-DVD have subsequent gatherings scheduled as well.

The ship is nice, though not as well organized as some other cruise lines I've been on. Food is excellent, the staff seems friendly and we are having a very good time and looking forward to some of the upcoming activities (both on-board and on-shore).

More to come. We'll sign off for now from the Home Theater Cruise.